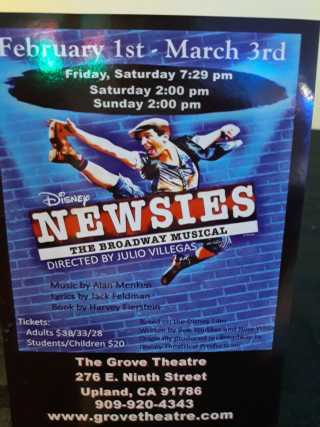 Upland, California (The Hollywood Times) 2/6/2019 – “We still have four more weekends.  It runs the entire month of February and the first weekend of March. There are four shows a weeekend, so there is plenty of opportunity and affordable tickets too!  Come and see it, you won’t regret it!” Jon Armijo, actor starring as Jack Kelly told The Hollywood Times.

I have seen this original Broadway play several times at the big theatres, but I have to say this production, being the first one in a small theatre, is quite good.  The Grove Theatre in Upland, CA.

Please visit their website for your tickets (mention Steve Viero and get $5 off your ticket):

The young cast did an excellent job portraying the characters that we have grown to love since the movie with Christian Bale in 1992.  You could tell the young cast were really having a great time performing.  The tap dance routine was just outstanding. Always glad to see tap dancing.

The adults did a fantastic job too!

This is truly a great story told through song and dance.  So round up the kids and in-laws and get your tickets for this family friendly and entertaining theatrical play.

If it has been awhile since you have been to a play, then this is the one to go to.  Come out this weekend with four shows every weekend thorought the month of February and the first weekend of March.

Our own THT photographer, Steve Viero is in the play as Governor Teddy Roosevelt.  So come out to see the play to cheer him on!

THT: How was it playing Teddy Roosevelt?

Steve: “I enjoyed being with the talented and energetic cast and crew. Playing Teddy Roosevelt who was a roubust individual in real life.”

THT: How did you research your character?

THT: How did you get the voice down?

Steve: “I developed the voice by getting to the theatre before reheasal and practiced while onstage.”

THT: How did you feel about opening weekend?

Steve: “We have done well so far. Newsies captures a historical aspect of our country in a creative and magical way.  A big “Thank You” to all, but especially to the audience and the mentors in my life.  We all hope your readers will come out to see it!”

THT: What role did you have today?

Jack:  “I had a Kaiser roll and before that, no! (Laughter) I was Wiesel, sometimes they call me Weasel and Mr. Jacobi, who owns the deli, then in Act 2 the mayor, so three roles.”

THT:  How did you get into character for your three roles?

Jack: Costume. “I never really felt like the character until I was in costume and I just had to become that character completely and believe that I was that character.”

THT: Did you have to do a complete costume change for each character?

Jack: “Yes because he character had a different personality, different way of talking, different voice which made it fun.”

THT: How do you feel about opening weekend?

Jack: “This is our fourth show already and time goes by so fast when you are having so much fun.  You know what, this audience was a small audience, but they were the best audience.  They were the loudest and I thought it was a full house.  A good audience.”

THT: How long is the show running?

Jack: “Until March 3rd.  Friday at 7:29; Saturday at 2 and 7:29 p.m. and Sunday at 2 pm.  It’s a great bunch of kids and they bonded very quickly and a very nice mellow group to be with.  I think everyone loves each other and having a great time.”

THT: It was nice to see a good crowd on Super Bowl Sunday.

Jack. “Yes. In fact, some of the football teams where going to avoid the Super Bowl game and come to see the show!  The coaches would not let them.”

THT: How was it opening weekend?

Maeve: “It’s been fantastic.  The rights to this show only came out a little while ago and I feel very lucky that we get to do it so soon after the rights were released.  That’s pretty exciting.”

THT: How did you do our research for the character you play?

Maeve: “I actually have been a Newsies fan since it came out. I saw it for the first time, it was my first Broadway show. I’ve seen it nine times live since.  So getting to finally do it is really exciting.  I’m a reporter in my real life so helped that my charater was a reporter as well.”

THT: that is why you did it so well!

Maeve: “Thank you.  It was nice coming into it because I was so familiar with the show already and the character just happened to relate a lot to my own personal life.”

THT: Your tap dancing was excellent.

Maeve: “Thank  you.  I have been tapping for 15 years now, I went to school for theatre as well.  A lot of my training at schools helped a  great deal as well.”

THT: How did you get this role?

Jon: “I came in for an audition and I was pleased to see that I had a lot of familiar faces also auditioning.  Just the usual process, tried out and got a call back and a couple of days later got the call that I got the part.”

THT: How did rehearse for the character?

Jon: “For my character, our director was very clear that he didn’t want us to copying anything, he wanted it to be our own show.  So I looked up the history behind the true story, which is the 1899 news bos strike.  I looked up the way they talked back then and the attitude they had then as well.  I did kind of look at Christian Bale’s performance in Disney’s Newsies movie.  For most part, I took direction for our director Julio and my own character.”

Take the Metrolink from Antelope Valley, Inland Empire-Orange County, Orange County, Riverside, San Bernardino and Ventura County.  Click the link to find the schedule times and take the train to Upland, which is one block from the Grove Theatre and make a day of it on Saturday or Sunday and dinner at several restaurants. 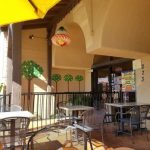 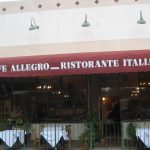 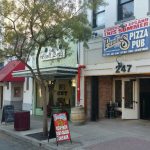 About The Grove Theatre

The Grove Theatre is located in the historical downtown Upland. Originally a movie theatre, it was built in 1947 by the Western Amusement Company, who, according to a Box office article of that date, was operating 22 other southland movie houses. The art deco Grove opened to a great fanfare, complete with red carpets, Klieg lights and Roddy McDowell as the Master of Ceremonies.  A notable feature of the theatre was the soundproof booths at the back, with glass windows and speakers that piped in the sound. This allowed patrons a place to take their crying children and watch the movie without annoying other movie goers.

In 1990, the theatre was purchased by Bill and Sherry Kinison and opened in February of 1991. Since then it has had 28 seasons of dramatic and musical theatre for both adults and children. The Theatre produced their shows as well as bring in national shows such as Church Basement Ladies, WaistWatchers and Menopause the Musical, which was such a success it ran for 9 months the first time it was here, that they brought it back two more times.

The opening show was Barefoot in the Park, featuring Ron McFaddin, Sherry Kinison’s brother. Through the years, many celebrities have graced the stage, including Dale Kristien (Phantom of the Opera star) and Bill Hutton (star of Joseph and the Amazing Technicolor Dreamcoat on Broadway). Together they created and starred in the Home for the Holidays Christmas Show that ran for 20 years at The Grove. Such notables as Joe Bologna, Jim J. Bullock, Tommy Chong, Loretta Devine, Denise Dowse, Christina Ferrare, Kim Fields,Tommy Ford, Dodie Goodman, Frank Gorshin, Sam Kinison, Ted Lange, Danika McKellar, Paulie Shore, Sinbad, Alana Stewart, Renee Taylor, Judy Tenuta, Fred Willard, Fred Willard’s Mohos, Jo Anne Worley and many more have performed on this stage or directed shows at this theatre.

The Grove Theatre and Academy, the not-for-profit arm of The Grove Theatre offered instruction to children and young adults for many years. It then gave them the opportunity to use that instruction when they performed on stage in numerous performances. Many students of the Academy have gone on to perform regularly on stage at The Grove and in other local theatres. The Academy also has taught young people basic life skills that have helped them in higher education and job performance.

We look forward to many more successful years ahead!