On the heels of a record-breaking year where Disney Junior ranked as 2022’s #1 TV Network among Kids 2-5 overall and retained its standing as the #1 Preschool Network for the last 10 years (every year since its launch), Disney Branded Television has ordered second seasons of its newest animated series “Firebuds” and “SuperKitties,” as well as an early season two renewal for upcoming series “Pupstruction.” The announcement was made by Ayo Davis, president of Disney Branded Television, during the Disney Branded Television presentation at the 2023 Winter Television Critics Association taking place at the Langham Hotel in Pasadena, California.

Home to some of the most cherished programming and franchises for preschoolers, including last year’s new hit series “Marvel’s Spidey and his Amazing Friends” and “Mickey Mouse Funhouse,” Disney Junior is building out its slate of fun and entertaining programming for preschoolers that reflects the emotional connection generations of consumers have to Disney storytelling and Disney characters, both classic and contemporary. In addition to the success of Disney Junior’s programming, the brand has created opportunities across other Disney lines of business through its robust franchising business, which includes licensed products and musical companions, including the three-time Pollstar nominated (2019, 2020, 2022) “Disney Junior Live On Tour” live stage show, that creates a full 360 experience for kids in a way that only Disney can.

Following a team of young first responders and their talking vehicle sidekicks, “Firebuds” premiered in September 2022 and has quickly become a fan favorite. Launch to date, the series is Disney Junior’s #1 series with Kids and Girls 2-5, as well as a Top 5 Cable series with Kids 2-5 and #1 with Girls 2-5.*

“SuperKitties,” about four fierce and furry superhero kittens, debuted this week (Jan. 11) and is off to an impressive start, with the series’ theme song racking up over 500,000 views on Disney Junior YouTube since it was released three weeks ago.

Debuting later this year, “Pupstruction” follows the adventures of the world’s first all-dog construction company and centers on an innovative young corgi, who might be the smallest pup on the crew but proves that you don’t need big paws to have big dreams or big ideas.

“‘Firebuds,’ ‘SuperKitties,’ and ‘Pupstruction’ all encompass what Disney Junior does best,” said Davis. “Each of these series embrace signature Disney qualities of imagination, adventure and heart, with music you can sing along to, and fun, energetic characters that embody positivity, optimism and the power of teamwork.”

Created and executive produced by Emmy® Award-winner Craig Gerber (Disney’s “Elena of Avalor” and “Sofia the First”), “Firebuds” follows a group of friends, all children of first responders, who embark on adventures to help their community and learn what it truly means to be a hero. Each episode is comprised of two 11-minute stories that showcase the importance of teamwork, helping fellow citizens and volunteerism. The series is produced by Disney Television Animation. Extensions for the series include a soundtrack from Walt Disney Records; storybooks from Disney Publishing, releasing later this year; and an innovative toy line from Spin Master featuring vehicles, figures, playsets and more, launching in summer 2023. 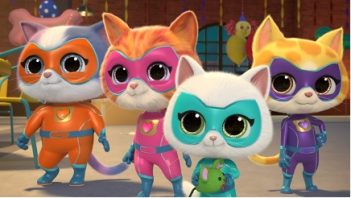 “SuperKitties” is an adorable and action-packed new series about four fierce and furry superhero kittens — Ginny, Sparks, Buddy and Bitsy — who are on a mission to make their town of Kittydale a more caring and “pawesome” place. Defeating villains and imparting important messages of kindness, empathy, friendship, resilience and problem-solving, the series is created and executive produced by Emmy Award winner Paula Rosenthal (“Peter Rabbit”). Emmy Award-winning producer, director and storyboard artist Kirk Van Wormer (“Transformers: Prime) is co-executive producer. “SuperKitties” is produced by Sony Pictures Television – Kids (formerly known as Silvergate Media) in association with Disney Junior. The digital soundtrack for the series, “Disney Junior Music: SuperKitties,” was released by Walt Disney Records in conjunction with the series premiere on Jan. 11.

“Pupstruction” is a vibrant new series about the first all-dog construction company, Pupstruction. The series centers on Phinny, an innovative young corgi, who along with the rest of the Pupstruction crew ― including spontaneous sheepdog, Luna; adventurous rottweiler, Roxy; and lovable mastiff, Tank — pours his mud, sweat, drool, and plenty of heart into keeping his beloved town of Petsburg in tip-top shape. The series is created and executive produced by Travis Braun (Disney Junior’s “T.O.T.S.”). Victor Cook (also from Disney Junior’s “T.O.T.S”) also serves as executive producer. Emmy Award winner Robyn Brown (Disney Junior’s “Muppet Babies”) is co-producer/story editor on season one and will serve as co-executive producer/story editor on season two. “Pupstruction” is produced by Titmouse in association with Disney Junior.