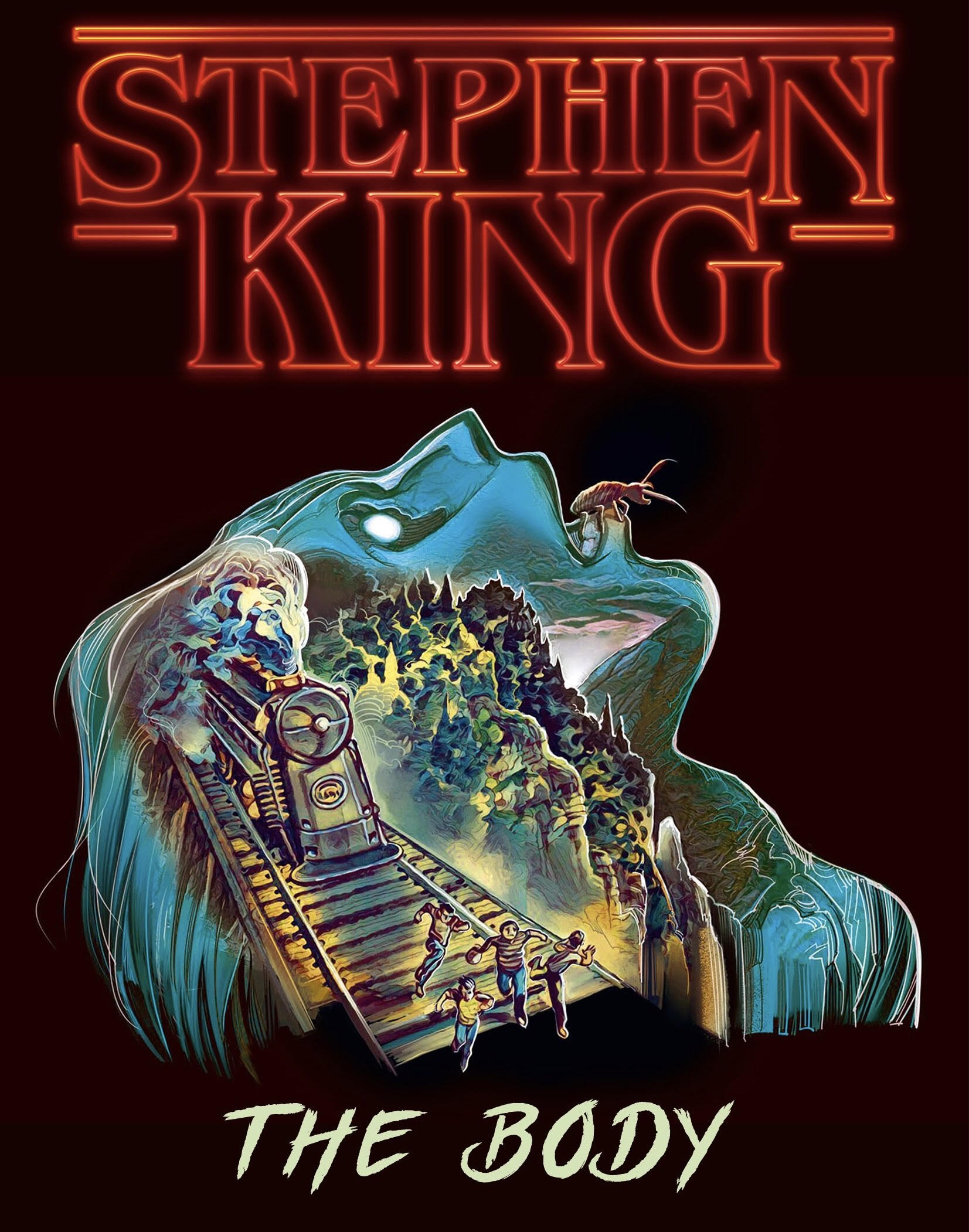 “None of us could breathe. Somewhere under those bushes was the rest of Ray Brower.”

A simple line of dialogue that has never lost its ability to spur a sudden barrage of dread. 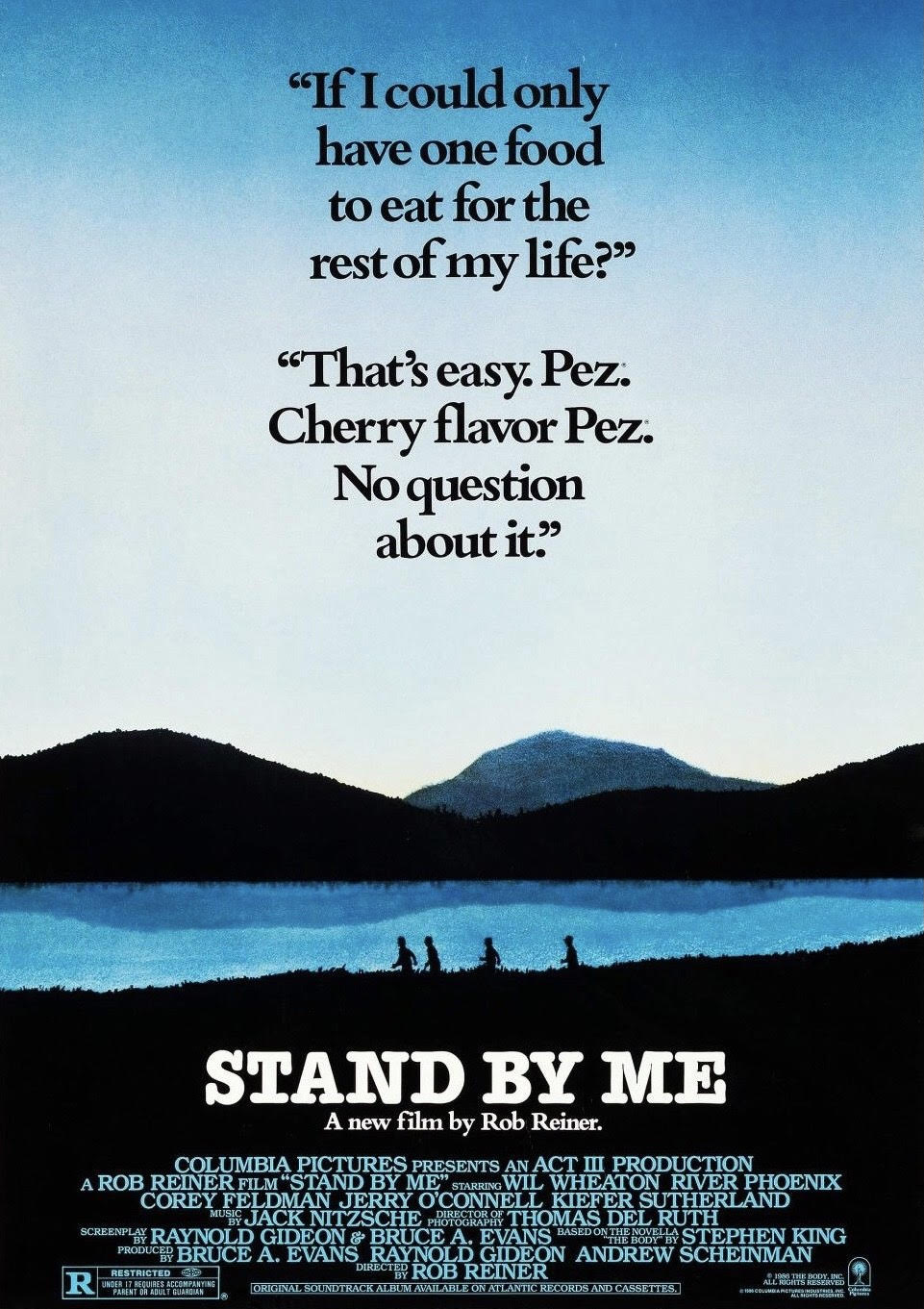 While walking along the railroad tracks within the vast woods of the Back Harlow Road in Castle Rock, Maine in 1959, four adolescent boys approach the end of their journey to locate the corpse of a missing teenager named Ray Brower, a kid from a neighboring town who had been hit by an oncoming train after having lost his way back home while out picking blueberries.

In Stephen King’s acclaimed novella, The Body, this particular segment is rife with some of the most entrancing and unsettling delineation as only King can deliver. Once you’ve arrived at this harrowing instance in the story, you can easily envision yourself within the confines of the sequestered timberland vista riddled with thick, marshy undergrowth and masses of brambles resting adjacent to the railroad tracks. A sense of foreboding starts to increase as the gruesome revelation of the lonesome, pallid figure lying face down amidst the seclusion of miry brush nearby begins to unfold with each turn of the page.

In Rob Reiner’s 1986 coming of age classic Stand By Me, this notable scene is beautifully and hauntingly carried out with picture-perfect melancholy, bereft of a few graphic details from the novella in which it’s based. Stand By Me impeccably favors its literary precursor with both tremendous reverence and dutiful accuracy in its effort to seize that ever sought after “lightning in a bottle” element crucial to the development of an inimitable film experience. Generally, when books are adapted into films, the end result very seldom assuages loyal enthusiasts of selective written works. Stand By Me is a uniquely exceptional and faithful adaptation that truly gives its noted base material a considerable run for its money, resulting in successfully securing a proper degree of cultural significance in the 34 years since its release.

Throughout the years since my first viewing of Stand By Me, simply uttering the name “Ray Brower” would almost instantly initiate a fit of nervous anxiety deep within the pit of my stomach. The actuality of what Ray Brower represents was essentially my earliest introduction to the concept of death as being a foregone conclusion. To be clear though, Ray Brower is not a horror villain. He’s no nightmare creature or notorious boogeyman akin to the general ilk that is usually laced within a Stephen King story. He’s a direct reminder that death itself is impartial and has no perception of solicitude for anyone, regardless of their age. He is a 12-year-old literary character who personifies the tragic misfortunes that can befall practically any individual amongst the everyday enigma that is life; a pitiable victim of brutal circumstance who has firmly been adhered to my psyche dating far back to my childhood and well into the present day.

Anyone with a heart or modicum of empathy who has seen Stand By Me knows all too well the rush of jittery anticipation that ensues once Vern Tessio (Jerry O’Connell) is heard eagerly crying out “THERE HE IS, I SEE HIM, LOOK, OVER THERE, I SEE HIM!!”

It’s in this moment that Vern, along with Chris Chambers (River Phoenix) Gordie Lachance (Wil Wheaton) and Teddy Duchamp (Corey Feldman) each transcend forthwith into impetuous adulthood upon their grim discovery; the solitary, lifeless frame of the missing teen splayed out beneath an earthy shroud of limbs and branches. Innocence lost in an instant once the shrubbery is gently brushed away from the defunct eyes and stone dead face of Ray Brower. In the seconds prior to the grim reveal, Richard Dreyfuss (at his absolute best-providing narration as adult Gordon Lachance) smites the viewer with an affirmation that swiftly ushers the situation to a stern reality:

Still gets me every time.

For actor Kent W. Luttrell, the brief cinematic portrayal of Ray Brower would become a visually significant movie moment as well as a kickstart in the direction of a lengthy career as a stuntman and stunt coordinator. Despite the countless times I’ve watched this wonderful film, this one particular scene still continues to this day to prove itself to be one of the most woeful and almost ominous of movie moments, at least in this writer’s opinion. I can simply attribute those particular feelings to the sheer solemnity and visuals of the scene itself. Any reputable actor worth their salt can play dead, but Kent Luttrell’s inert portrayal of the ill-fated Ray Brower silently presented a rendition that both literally and figuratively brought the fictional character to life… so to speak.

I reached out to Kent recently to talk about the years since Stand By Me, and how playing dead launched an eminent career as a renowned stuntman and stunt coordinator.

Brian Maddox: How did you come upon the brief, yet prominent role of Ray Brower?

Kent Luttrell: I was hired as a photo double for Corey Feldman. They needed a more realistic looking dead kid as opposed to the plastic dummy that they were originally going to use. At 19 years old, I looked young enough and was well-liked on the set, and BOOM, I was the guy.

BM: How long did the scene take to shoot? Was the makeup fairly easy to sit through?

KL: It didn’t take long at all. Maybe less than two hours. The makeup was done by the famous Monty Westmore and was quick. What is not shown in the final cut is the live black beetles that crawled out of my mouth. I was to hold a couple of them in my mouth and let them crawl out once the director prompted.

BM: Were the young actors allowed to see you as Ray Brower prior to filming, or were you kept away in order to elicit an unfeigned reaction?

KL: I can’t recall. I think it was a surprise. I had been working with the actors for more than a month, so we were well acquainted.

BM: Not very many people have noticed (myself just recently) that you also have another “blink and you’ll miss it” cameo in the film. Tell us a little about that.

KL: It was during the Great Tri-County Pie Eat scene. I’m standing between the Donnelly Twins when they both say in unison “Hey Lardass, chow down wide-load!” There was a DGA trainee that put me in there knowing that I would be right in the middle of the action. It was a big deal that I did not know was a big deal. It was my first film and I was totally clueless.

BM: Does anyone by chance ever recognize you as Ray Brower?

KL: No, nobody ever does. But anyone who knows me always introduces me as the dead kid in Stand By Me. Not a week goes by that it doesn’t happen, even 30 plus years after.

BM: How has Stand By Me had an effect on your life over the years since its release?

KL: A profound effect indeed. I chose to get into the ‘business’ because of it.

BM: You’re also a stuntman/stunt coordinator. Has there ever been an instance where you immediately regretted taking this profession or is it simply just a leap of faith every time?

KL: Oh sure I have regrets at times, but I have had a great life due to stunt work. There might not be enough work at times, but what would you rather be in the end.. an accountant or a stunt guy?

BM: What have been some of your most memorable and prominent roles throughout your almost 40-year career?

KL: Way too many to name, but nothing even comes remotely close to the experiences I had while working on Stand By Me… nothing at all.

Call me crazy, but ever since I was a kid, I’ve always found myself awash in relief upon seeing Kent’s name rolling upward during the ending credits, or while perusing his Facebook page in the present. Every photo of him with his warm smile seemingly emits a sort of positive energy that is efficiently contagious; reassuring me that he is in fact still among us and not actually lying in repose somewhere alone in the woods. I know… crazy.

Whether you’re a first time viewer or a long-standing admirer, Stand By Me is a one of a kind motion picture experience that is destined to remain in your subconscious long after the classic title song by Ben E. King fades out in tandem with the end credits. I’ve never had any other film have the kind of impact on me later on that could ever compare to the kind I get from Stand By Me.