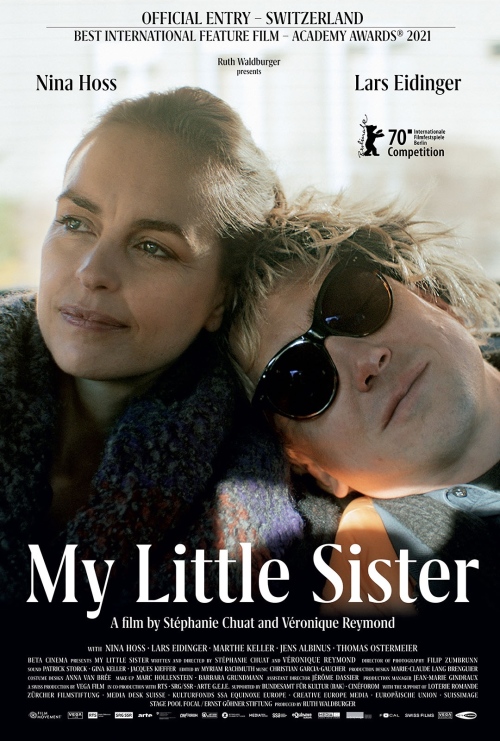 Los Angeles, California (The Hollywood Times) 1/27/2021  Stéphanie Chuat and Véronique Reymond have known each other since their childhood. Both passionate about theatre, they are accomplished actresses and have performed in numerous Swiss and French theatrical productions. They have created many shows as a stage duo as well, and their first step towards cinema was by including video in their plays. This led them to write and direct four short films. One of them, Berlin Backstage, shot in the prestigious Berliner Philharmonie, won a Berlin Today Award (Berlinale 2004). Now, their second feature Schwesterlein – My Little Sister, with major German actors Nina Hoss and Lars Eidinger, was selected in Competition at the 70th Berlinale, and is the Swiss Oscars Contender for Best International Feature.

Tell us about the film and why it is so important to you?

My Little Sister is a story of the heart. The heart of two siblings beating together, of two artists believing in their dreams against all odds. The movie is very close to us because our collaboration as writers/directors is based first on an unbreakable friendship, which has lasted since our childhood. We’ve tried to express something about this invisible but very powerful link to the story, the intangible bonds that connect people. And today, in the most unexpected way, with the current global Covid situation, when mankind has to struggle through hardship when the movie industry is shut down and actors all over the world are on “standby”, we feel that our movie has a message of love and hope to convey.

Where did you get the idea for the film set?

First, we wanted to open new perspectives and work with non-French-speaking actors (our mother tongue is French) and wanted to explore the experts and the world of boarding schools in Switzerland. Also, we were inspired by Nina Hoss, the German star we had seen in the movie Barbara by Christian Petzold. We began to write a script for her… and fate took a hand. In 2015, we bumped into Nina Hoss in a boutique in Berlin! We went over to her and said: “Hello, we’re Swiss filmmakers and we’re writing a script for you. Would you have time for a coffee?” She was a bit surprised by this unconventional approach, but she called us back three days later, and we met for a “quick coffee” that ended up lasting three hours. It was an incredible piece of luck meeting her this way and that she remained faithful to the project, as it took five years from this moment until the movie premiered in Competition at the Berlinale 2020. While getting to know Nina, we discovered our common roots in theatre. This gave us the idea to write her a theatre family, an actor twin brother, and to develop a very strong relationship between the two of them, through sickness and existential crisis.

How does this film hit home for you?

This movie is very personal for different reasons. As said above, because it describes a lot of our own relationship in this story about twins. We both share a world together that will no longer exist if one of us is gone. It’s also very close to our hearts because, during the writing process, Stéphanie’s mom got very sick from lung cancer, and from one day to the other, Stéphanie became the family caregiver of her mother. She literally turned into Nina Hoss’s character, spending her days making phone calls, arranging doctor appointments, chemotherapy sessions, etc… Véronique would then observe the responsibilities of a caregiver and insert them in the script. And then, Véronique’s father passed away, two months before Stéphanie’s mother’s death… So, even if we aren’t twin sisters, we both went through loss and mourning during the writing process of My Little Sister.

What surprised you the most when filming.

As we had a very tight schedule, with many scenes to shoot each day, concentration was at its maximum on the set. We were very impressed by the immense talent of our actors, the quality of their performances from taking one, allowing us to immediately explore all the nuances of the acting and dig into the heart of the characters. Nina Hoss and Lars Eidinger are both incredibly professional and hugely talented.

Share your favorite scene. What is your hope for the film?

Our favorite scene of the movie is the last one because it was probably the most difficult one, in terms of acting. Nina Hoss had to experience the entire journey of the movie in a single shot, going through all the emotional shifts of her character, the various stages of mourning, and then the glimmer of hope which leads us to believe that creativity and love will survive the separation. We had an incredibly intense connection with her and Lars at this precise moment during shooting. A “Sternstunde“, how one would say in German. A magical moment.