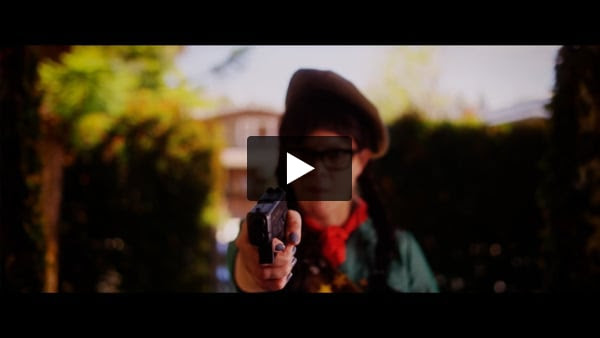 You have invented a new genre of Comedy that you call the “Cromage Noir.” What is it?

Well, on some level, the name is a bit of a joke. I felt like I was throwing so many different genres together that I had to distinguish it with different nomenclature. The truth is, there are no new stories under the sun, but there are different ways of telling the same stories. The Hit is a criminal-romantic-comedy and, by definition, a genuine noir, complete with femme fatale, as well as being an homage to those various types of films. In simpler terms, you might call it a dark comedy. Though I was surprised that my actors and some other folks who’ve seen the film call it “charming.” I guess it’s charming with a body count. 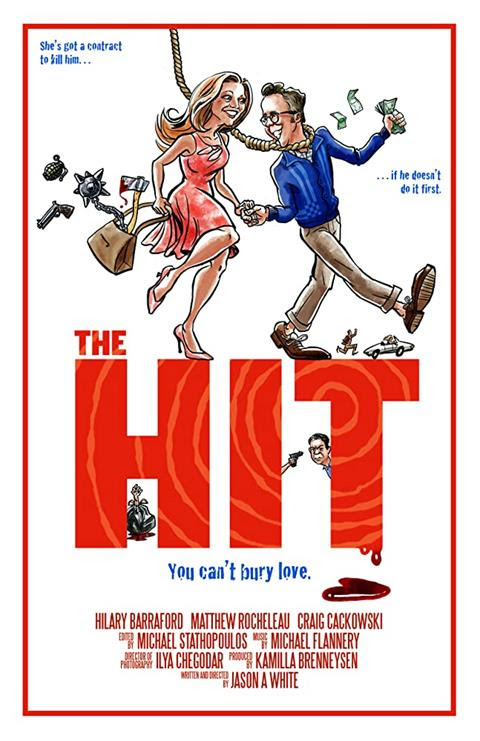 The Hit is your directorial debut. Tell us about it.

Ostensibly, The Hit is about a hard-hearted female assassin who falls in love with her suicidal mark. But on a metaphoric (or metaphysical) level, it’s really about how the many obstacles in our lives are, generally, of our own making. That may be ascribing a lot to a seven-minute comedy, but I think it’s there and it’s definitely my story.

Case in point: regarding directing, I’m a late bloomer. I’d reached a point in my writing career where I hadn’t been on a hit show and the offers weren’t pouring in. I’d worked all over the industry from PA, to sound editor, to development executive, to the critic, to advertising copywriter. On my “off” time, I’d co-written a couple of shorts; created a web-series that collapsed; and co-wrote a feature for hire. Though I’d never gone to film school, the film has always been my passion. So, I finally decided if I was ever going to get anything done, I’d have to do it myself – an attitude I wish I’d had twenty years ago (though, to be fair, I probably wouldn’t have been as smart about it then – and now, of course, the accessibility is much easier). And what better way to test my abilities than in a bite-sized, manageable format. Even in a small format, this was a daunting hurdle for me.

I’d written the script for the lead actor (Hilary Barraford) whom I knew through good friends, and I managed, with the help of other great friends, to assemble a crew and cast that could help me bring it to life. The script was rather ambitious, using eleven different locations. And my producer, Kamilla (Brenneysen), was even more ambitious, as we crammed all of that into three days of shooting, never exceeding a twelve-hour day… (well.. except the first day, we went to fourteen hours, but that was all with cast and crew consent). It was a whirlwind, but one of the most exhilarating experiences I’ve ever had.

It was so much fun for me to do. I don’t have any airs that I’ve created a genius masterwork. But I’d be really happy if you laughed, maybe got something more out of it than that, and didn’t feel like you’d lost seven minutes of your life. That’s a success for me.

The Hit with its humor to shed light on human connectivity and to discover the odds of finding true love. What was your favorite scene?

I’m so happy that you could see the theme of human connectivity. (Not that I was hiding it). My favorite scenes are between the two leads Marcy (Hilary Barraford) and Norman (Matthew Rocheleau), especially the last scene when the two are deeply in love. Marcy is so vulnerable in her confession and Norman is so sweet in his understanding, despite the fact that they’re both saying and doing very absurd things, humanity is there. And that’s all on the two actors. They gave me a lot.

In terms of cinematic language, my favorite scene is Norman walking down the street and we reveal Marcy surveilling him. I’d storyboarded almost the entire script, but this was a scene I’d had trouble with because I had to convey so much information. I’d come up with insert shots and P.O.V.’s through Marcy’s windshield. And all of that would have slowed the film down. I was trying to figure it out with my DP, Ilya (Chegodar), and he came up with the simple and elegant solution of an oner. It’s an example of a clean solution to an overly thought-out problem.

You purposefully manipulate some old visual effect tropes to resonate with the influence of the Golden Age of studio filmmaking. Why was this important?

There were fanciful reasons and, of course, practical ones. In the script, I definitely wanted an over the top feel to their falling in love. I think many folks get their ideas of what love is and what it’s supposed to look like from films and television, I know, as a kid, I did, especially from old movies. There’s wonderful fantasy in those films when the actors are on a set with a rear projection background on a giant studio soundstage. I love that… but I’m also aware of their earnestness. That atmosphere was something I wanted to recreate, as best I could, and parody. The poking fun is what they’re doing within the realm of this magical romance – which is, five-finger-discounting a blouse, jacking a car, skipping through fields of flowers (which I don’t know where that trope came from, but it still makes me laugh). In the post, my editor and I oversaturated the colors to contrast the dark coolness from the previous scenes, but also as an attempt to get the candy-look of Technicolor… I don’t know if we succeeded there, but we tried.

As I mentioned, the script was ambitious in its scope, but, practically, we couldn’t afford to add more locations and I knew my green screen effects were not going to be, say, MCU or ILM-quality, so I wanted to embrace their artifice. I added Kodachrome plates of old Los Angeles landmarks, like the May Company and the Brown Derby and then those lush shots of flowers which are clearly not even in the U.S. Again, it was my way of honoring the past, while also trampling it a bit.

Ultimately, all this was in service of laughs. When I wrote it in the script I laughed. When we shot it, I laughed. In the editing room, I did what I could to enhance the laughs, adding some lines of dialogue and the like. If it doesn’t garner a chuckle, then I made some big mistakes.

What did you enjoy the most while directing?

I loved the collaboration. It’s one thing to be the master of your own world on a computer in your room. But when you get something out and up on its feet and you have wonderfully talented people who want to contribute their time and creativity, it’s exciting and rewarding. And if you present yourself a certain way, everyone on the crew will want to contribute in the service of making a better film. I’d be lying if I said I don’t have an ego. But I don’t let that get in the way of making something better. I was pretty merciless on myself in terms of editing. If it wasn’t working I’d cut it out, despite some protestations from my producer and editor. But I don’t see any point in being precious. My rule of comedy is Shakespearean – “Brevity is the soul of wit.” Or in my words, if you can’t be funny, be brief.