Los Angeles, CA (The Hollywood Times) 11/27/2019 – Los Angeles-based Director, Gene Blalock, is known as much for his touching, heart-warming films as for his eccentric horror vignettes. Bringing a decidedly human perspective to each of his projects, Gene’s works reflect our common humanity — reflecting reality back as through a mirror of compassion — enabling us to examine and consider ourselves. In every genre, Gene’s work rings true in a thought-provoking way.

Gene Blalock: I’ve always had an affinity for the Arts. My father was very creative and would draw things for me when I was very young. In school, I had little interest in classes outside of art and literature. I was always drawing, painting, playing music, or doing something artistic. I taught myself and started editing videos for the skateboarding team I was on. That lead me to pursue production at school, but even that was in a round-about manner. Where I grew up, the Arts were not a career. It was assumed you would go to school, get married, get a job somewhere in town – You could do your art as a hobby on the weekend. That always sounded like such a miserable life… Somehow, I figured out early on that I would rather try and enjoy life even if that meant uncertainty and poverty. Luckily, I’ve been fortunate to be able to focus on music, art, and film for most of my life. And while I’ve had my share of struggles and poverty, things have generally worked out for the most part.

You are known as a Master Storyteller. Tell us about your vision for film and your eccentric horror vignettes.

Gene Blalock: I don’t know about that. I am certainly still learning how to tell stories. Filmmaking is a constant educational process. But for me, no matter the story, be it horror, drama or whatever, I focus on the human connection. As viewers, we need to connect with the characters in order to care about what happens to them. I just try to make my characters feel genuine. Sometimes they are a bit quirky, but they always need to be “real.”

What is it about horror that moves you?

Gene Blalock: I think fear is a primal emotion. It’s something everyone has felt at some point in their life, so it makes horror films relatable without having to give a lot of exposition. Growing up, there was a very strong sense of cataloging that happened and when you don’t fit into those societal category norms early on, you sort of ended up on the outside looking in. I was never interested in sports or school elections, so I found solace with the other misfits. I think that’s why I could relate to the monsters in the films I watched as an adolescent. They were the outcasts and oddities… I empathized with them.

That said, I don’t think I’m necessarily a traditional horror director… Most of my films tend to lean more toward drama with more of an emotional or psychological horror element. I prefer to leave viewers wondering whether something was real or simply imagined.

Gene Blalock: I’m not sure that I’ve gotten that break? I’ve just always had the incessant need to create, so that’s what I’ve done.

Are there recurring themes in your films?

Gene Blalock: Not consciously, no… maybe on a subconscious level? I’ve been told there is sort of a fairytale or surreal element to a lot of my films. But that’s life to me. It amazes me when people say things are “normal.” Nothing is normal. Life is strange.

Tell us about the Nightmare Gallery. What will the audience take away?

Gene Blalock: The Nightmare Gallery was brought to me by the writer/ producer… It was an ambitious script, perhaps a bit too ambitious for the budget. I was attracted to the psychological side of the story. How far into madness will you allow your obsession to take you… the pathos of one’s decaying mental sanity seemed like a truly interesting thing to explore in a film. Lovecraftian horror is tough to do on small budgets and it’s certainly a niche audience. I’m not sure the general horror-watching audience will enjoy the film as much as a more niche group. There are no jump scares or boogie men hiding under the bed. It’s a slow decline into self-prophesized lunacy. 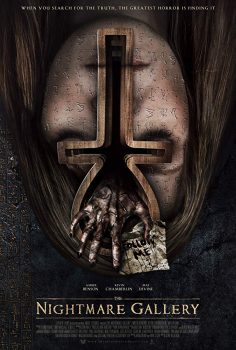 We were fortunate enough to work with a genuinely talented cast lead by Amber Benson (Buffy The Vampire Slayer). The Nightmare Gallery follows Amber’s character, Dr. Samantha Rand, a renowned anthropology professor whose life is turned upside-down by the sudden, suspicious disappearance of her protégé. Three years later she receives a strange package of artifacts that forces her to embark on an agonizing journey into a mystery that threatens her career, her wife, and her sanity. If anything the film might be a cautionary tale against obsession, but hopefully, the audience will leave with a sense of dark wonder.

Which genres interest you? Why?

Gene Blalock: If there is a good story with compelling and emotionally complex characters, genre doesn’t matter much to me. Films are tough to do unless you can personalize them in some way, so if I can connect to the story, I’m interested. I don’t think it would be much fun to be stuck in just one genre… it would become hard to expand or grow as an artist. That said, I’m not a huge fan of most American comedies. I don’t find them complex enough to enjoy. At the same time, I would enjoy directing a musical one day.

What makes you unique as a Director?

Gene Blalock: I am not sure, if I am doing anything revolutionary or groundbreaking as a director. I think everyone sees the world through their own emotions and experiences… I just apply my emotions, experiences, hopes, dreams, fears, and regrets to how I tell a story.

Tell us about Seraph Films. When did you launch your company?

Seraph started as a tag I just threw on my film projects at the University. I don’t think I had any real intent of it becoming anything. The Seraph moniker ended up becoming attached to most of my creative projects from that point forward, be it film, art, or music. After I moved to Los Angeles and got back into filmmaking, I would meet with a lot of people who had all these ideas and plans, but all they did was talk. I decided to make it official and start an independent film production company. So, with the help of my business partner, we filed the paperwork and started producing films and series.

Seraph is a bit different than other companies. I’ve never been one to have weekly meetings and set 10-year goals or the like. It’s meant as a creative outlet for indie filmmakers to be free and hopefully produce projects that would not get produced otherwise. We are still on the super-Indie side of things, but hopefully, we will continue to grow and evolve.

Share a few of your awards. What did they mean to you?

Gene Blalock: Awards are a bizarre beast… people like to slap laurels all over their posters and such, don’t they? Everyone is an “award-winning director or writer…” It’s always a bit unexpected when I am presented with any official accolade since most of my films are a bit left of center. It’s always nice to get recognition from your peers, but I’m not sure it  matters much. It doesn’t change the way I go about creating art. I am certainly not one for pomp and circumstance and awards ceremonies… but I am glad when people like what I do.

Where do you derive your inspiration for your films?

Gene Blalock: I think life is the biggest inspiration for any art. Early on I became fascinated with urban legends and local folklore, so a lot of my early short films drew inspirations from those handed down stories. Beyond this, I often see people who somehow intrigue me. Sometimes, I try to imagine what their stories might be.

What misnomers are there about being an Indie Filmmaker?

Gene Blalock: I think if you are on the outside of the industry, you see filmmaking as a glamorous thing; red carpets, celebs, ceremonies… and I certainly see a lot of people portraying it that way on social media. I don’t think many people understand just how hard it is to make a film, especially on the indie level. You end up wearing a lot of hats on smaller productions. There is so much that goes into pre-production alone… then you can have 12-hour days during production (ignoring all the prep-time off-set, reviewing the “dailies,” and other things that absolutely must get done each day). Then post-production begins. Honestly, it’s one of the most stressful and toughest things I’ve ever done. But that’s the beauty of the medium on the indie level. You build a strong team that becomes your family. You problem-solve together and support each other through the anxiety and deadlines. And then when it’s done, you look at one another and ask when does the next one begin.

Gene Blalock: As far as filmmakers, Tim Burton, Steven Spielberg, and David Lynch are all Directors I’ve admired over the years. I get to work with a lot of really talented filmmakers as it is, so I have not given this much thought.

Gene Blalock: I have a documentary called SEVEN DAYS IN MEXICO that is scheduled for release early in the new year. Currently, I am finishing up post-production on a dramatic feature called CARPE NOCTEM. That should be out sometime next year as well. As for my goals, I just hope to be fortunate enough to keep making films.