Palm Springs, CA (The Hollywood Times) 10/26/18 – The Dinah bills itself as “the largest and most famous girl party music festival in the world.”  And now the 5-day party and music festival is gearing up for its 2019 festivities in Palm Springs, to be held April 3rd-7th.  Organizers anticipate more than 20,000 participants, 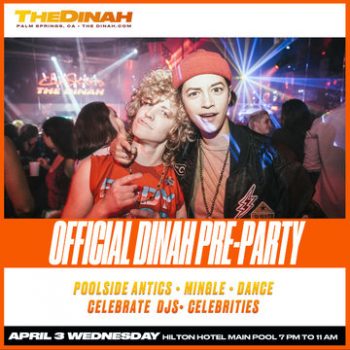 The Dinah Weekend begins with an official Opening Party, several pool parties, and a comedy house.  2019 will feature a Black and White Ball Friday, April 5th, a Hollywood Party Saturday, April 6th, and a closing party Sunday, April 7th to be held at Zelda’s Nightclub.   Locations for the other events will be announced in January, as the actual date draws closer.

The Dinah is named after iconic American singer, actress, and television personality Dinah Shore, and has grown in scope and prominence, with acts becoming more visible every year and raising the event’s profile.  The first event of its kind was held in 1986.  It’s official debut was in 1991.

Tickets for The Dinah can be purchased through EventBrite.  To learn more about the Official Dinah Weekend, visit www.thedinah.com.