Los Angeles, CA (The Hollywood Times) 12/14/21 – A tender, if rather sober, prison drama backed by a strong ensemble cast, The Inner Cage (Ariaferma, 2021) is the 3rd film of Neapolitan director Leonardo Di Costanzo, after his last feature, The Intruder. This film is featured as part of the American Cinematheque’s annual Cinema Italian Style series, available online. Starring Toni Servillo (The Great Beauty) as a kindhearted, non-nonsense officer presiding over a dozen inmates in a remote Italian correctional facility on the verge of shutting down, the movie has all the ingredients for a cutthroat escape thriller, with plenty of occasions for the prisoners to make their big break. Instead, Di Costanzo’s film veers in a more restrained direction, chronicling the thorny relationships among the bunch of men trapped behind bars, or just outside them, as if they were all stranded together on a desert island.

Servillo plays Gaetano, the captain of a half-dozen or so correctional officers guarding the fictional Mortana prison (actually in the mountains of Sardini), which has been more or less abandoned save for a group of inmates stuck waiting for a transfer that never seems to come. The raggedy crew of prisoners is headed by their self-appointed boss, Carmine Lagioia (Silvio Orlando, known from The Caiman), a nefarious mobster who’s been locked up for a long time and holds plenty of sway with his fellow prisoners, including the loud-mouthed Cacace (Salvatore Striano) and the quiet young newcomer Fantaccini (Pietro Giuliano).

Mortana, a 19th century (imaginary) prison in a remote and unspecified part of Italy, has been decommissioned for use. Due to some bureaucratic snafus, a handful of the prisoners must stay behind at the prison while their paperwork for transfers is sorted. A handful of guards must also stay behind, led by their captain, Gaetano (Servillo). All visits and activities are suspended, with an outside company delivering meals. However, the prisoners are intensely unhappy with the food being served, and in this suspended, uneasy atmosphere, engage in a hunger strike. To avoid issues with the commissioner, Gaetano consults the unofficial leader of the prisoners, an ex-mafia boss known as Lagioia (Silvio Orlando), who insists he cook all the meals for the remainder of the current situation. Gaetano relents, leading to relaxation in other various rules, allowing the men to develop more personable relationships.

The script, co-written by Di Costanzo, Bruno Oliviero, and Valia Santella, sets up what seems for half the running time, a situation where Lagioia may very likely outsmart Gaetano and find a way to sneak out, even if his sentence is almost up. Several red herrings are tossed our way, especially after the inmates protest the poor quality of the food and the head officer allows the aging capo to prepare collective meals for everyone, granting him access to the kitchen and its sharp cutlery. Later on, when a storm knocks out the electrical power, it looks like we are headed into Shawshank Redemption, but instead, we experience a communal supper with battery-operated lanterns in the main hall of the rotunda of the prison. What feels like the last supper scenario unfolds, guards breaking bread with inmates and even sharing a bottle of wine. By the time the narrative reaches this point, the film feels as if its wheels are spinning. Inevitably, this transitory period comes to an end, with prisoners pilfered off to their next destination, the guards eventually be assigned their next post.

More interested in how penal institutions weigh heavily on the people inside them, whether they serving out long prison terms or employed by Italy’s messy bureaucracy of a prison system, The Inner Cage reveals Di Costanzo’s roots as a documentary filmmaker who chronicled Neapolitan life in works like Cadenza D’Inganno (2011) and At School (2003). His approach here is more of a solemn character study than full-fledged drama, with Gaetano and Lagioia taking center stage as two men passed their prime who find out they may have more in common than imagined, even if they hardly say a word to each other. 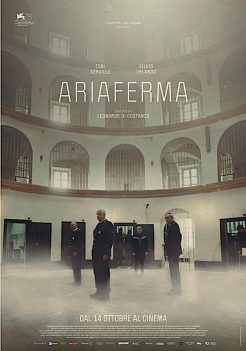 It’s refreshing to see a prison movie that doesn’t resort to the usual bouts of extreme violence or chaos, depicting a milieu that’s both more contained and more real, with a solemn tone marked by the plodding, daily grind of being in a place with nothing much to do. Both bands of men, law enforcement and criminals, will continue to exist in this limbo required by captivity. What we’re likely meant to feel is the exhausting futility of the judicial system, the rippling cost of humanity reaching beyond those destined for such punishment.

Shot by Sorrentino’s regular cinematographer, Luca Bigazzi, in stark colors illuminated with lots of top-light, the craft level here is above that of Di Costanzo’s other two features, which had more of a handheld naturalistic look. This especially goes for the decor: a massive, highly photogenic prison whose labyrinthine design recalls the drawings of Italian artist Giovanni Piranesi. At one point, the director has the camera slowly glide past a row of deserted cells, some of them filled with eerie signs – an empty chessboard, a dirty, turned-over bed – of the people who once lived there, and it reminds us how, for so many men over so many years, such a dank, forgotten place was what they called home.