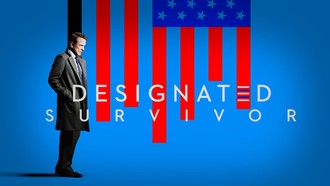 Beverly Hills, California (The Hollywood Times) 9/19/16 –  “I knew about the first designated survivor before I read the script, I knew about that policy.  I did not know that there was actually two.  There is a representative of each party, so in our scenario our party is democratic and I was a member of the cabinet and the republicans have a designated survivor as well.” Kiefer Sutherland told a group of journalists at the ABC after party at the Beverly Hills Hotel, which he was a part of the first panel at TCA a few weeks ago.

Kiefer Sutherland stars as Tom Kirkman, a lower-level cabinet member who is suddenly appointed President of the United States after a catastrophic attack on the U.S. Capitol during the State of the Union

Kiefer told THT, TCA and other journalists that he knew Mark for twenty years and when his daughter was born he would walk her in the carriage across the street from Mark and they became friends and they became friends. “I have huge respect for all the work that he has done.  Having said that, I had no intention of doing a TV show and I was very busy, and I had to explain with some intelligence why I couldn’t do it and I caught myself on page 22 and I never sank a ship. I had to go back and start from the beginning because it was shaping so beautifully and remember getting to the very end of the script and realizing that I was potentially holding the next ten years of my life in my hands.”

“I was so beautifully structured, it had the thriller aspect of trying to find absolute values it had a family draw and what happened overnight, you go from a very structured life to the life of the President of the United States and the First Lady and was has happened to your children. We need to have in the country in a rational way not so decisive.  I felt this script afforded every opportunity to create a landscape that was so vast that being able to do many years of a show would be possible and that was very exciting for me so that is how I came to be part of the show.”

Natascha McElhone was asked how are you doing to keep the family life as interesting of the terrorism?  “I’m hoping that being an integral part of the family she will turn out her own career maybe she ends up having to sacrifice but then the whole conflict of interest in that storyline, I think of other women that fact that at work.  I think she has invested an interest in his political life, they are political allies and his behavior now.

Kiefer was so poised when the many journalists put their recorders up to his face. He had a smile on his face when he  answered the many questions about his new show and without skipping a beat.  He told us that he had a million of questions once he read the script and he talked them over with Mark Gordon, executive producer.

The action in the show is going to be the investigation of the bombing, like the All the President’s Men.  His character has to learn to trust people and how to be a president.  That his character is not going to magically jump up and know how to fight better and be the President.

Kiefer spoke about the strong marriage he and the First Lady character played by Natascha McElhone, has, and that she studied Michele Obama on tape and that Natasha only had 35 seconds to realize she was now the First Lady of the United States.

When Kiefer was asked about his reference to FDR being his favorite president, he had this to say “There is something about  Franklin D Roosevelt and this is a personal choice of mine, he was a quieter man and not as an angry, LJB had a temper and I think my character has to find his way into being president.”

You come from a very political family, did they talk about this stuff when you were growing up in the past?

“It was at our dinner table every night.  My grandfather was the leader of the XEB and he was responsible for health care and form the time I was five years old I was learning about politics. My mom was an activist, not only here in the United States but in Canada as well.”

“Kal Penn is amazing. I can talk to you about Kal Penn as an actor for days.  The fact that he has lead as diverse a life as he has, and I am not simply just talking about working at the White House he is a PA and he has had different interest in things within the file industry as an actor, writer and one of the best story tellers I know.”

Kiefer Sutherland stars as Tom Kirkman, a lower-level cabinet member who is suddenly appointed President of the United States after a catastrophic attack on the US Capitol during the State of the Union, on the highly anticipated ABC series Designated Survivor. In this dramatic thriller, Kirkman will struggle to keep the country and his own family from falling apart, while navigating the highly-volatile political arena and while leading the search to find who is responsible for the attack.

Most recently, Sutherland starred in the critically acclaimed Fox drama “24,” for which he has won numerous awards, including a Golden Globe, Emmy and two SAG Awards for Best Actor in a Drama Series.  The show has also won an Emmy Award and a Golden Globe Award for Best Drama. The eighth and final season of “24” aired on FOX in January 2010. “24: Redemption,” a made-for-television movie that bridges season six and season seven of the television series, aired on November 23, 2008. The television movie was nominated for five Emmy awards, including one for Sutherland for “Best Actor in a Television Movie or Miniseries.”

Sutherland’s first major role was in the Canadian drama, “The Bay Boy,” which earned Sutherland and director Daniel Petrie, Genie award nominations for best actor and best director, respectively.  Following his success in “The Bay Boy,” Sutherland eventually moved to Los Angeles and landed television appearances in “The Mission,” an episode of “Amazing Stories” and in the telefilm “Trapped in Silence,” with Marsha Mason.

In 1992, Sutherland starred opposite Ray Liotta and Forest Whitaker in Orion Pictures’ “Article 99,” and in Castlerock’s military drama “A Few Good Men,” also starring Jack Nicholson and Tom Cruise.  Later, in 1994, he starred with Jeff Bridges and Nancy Travis in the American version of “The Vanishing” for 20th Century Fox.