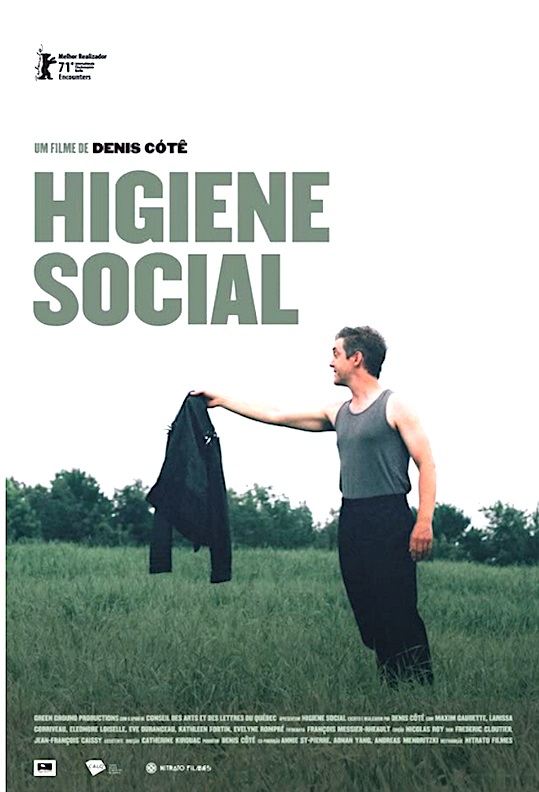 On Thursday, July 7, the itinerant Acropolis Cinema presented the Los Angeles premiere of Denis Côté’s Social Hygiene (Canada, in French, 2021) at the 2220 Arts & Archive Cultural Center on Beverly Blvd. in Los Angeles. If you’ve ever seen a Denis Côté film, you know about the writer-director’s penchant for experimenting with the cinematic form, jettisoning narrative conventions and challenging viewers to fill in the blanks.

Viewers will be immediately struck at the social distancing of the characters. Yet the film, as a project, pre-dates COVID-19 and the script mostly written by Côté in 2015 while he was staying in Sarajevo for a month after a film festival there. This somewhat quirky film with the actors talking at great distance from each other in a pastoral landscape was meant to be “a comment about social media today” and how the language of social media distances and distorts communication.

Côté’s favorite themes in his films are alienation and isolation, and here the isolation is depicted as social distancing. As Denis Côté explained in a Zoom interview prepared for this screening, “Social Hygiene was planned to be shot in giant landscapes with actors five meters from each other and suddenly five years later it fits perfectly to the rules of shooting in a pandemic. I was not planning to write a real narrative film. I was completely intoxicated with Swiss author Robert Walser, who was a drifter writer, he just walked around with a very ironic way of looking at things and wrote about his observations, I was completely intoxicated by his style and I was talking like him in my head.” The result is a series of dialogues that remind me of Diderot’s Jacques the Fatalist but also of the surrealist chatter in a Harold Pinter play.

When the film begins, a man stands in the center of a lush field, his slumped, fidgety body language bringing to mind a working schlub impatiently waiting for the evening train home. He’s joined some 20 to 30 feet away by a woman whose gaze he largely avoids. He talks at length about the pesky indignities of daily life and about a screenplay he’d like to write, while she sizes up his failings and delusions and offers counsel or recrimination. The wind blows and the birds sing, and a static camera captures it all from a healthy distance. This is Antonin (Maxim Gaudette) who is being berated by his sister, Solveig (Larissa Corriveau) for his idleness and, as we soon learn, his work as a petty thief on the street, in the train station and at the airport.

This is the dramatic setup that recurs, with some minor variation, eight times over the course of Denis Côté’s 75-minute Social Hygiene. In every case the man is Antonin (Maxim Gaudette), a philandering, philosophizing petty criminal who’s down on his luck, while the female role is occupied at different junctures by his sister, Solveig (Larissa Corriveau); his wife, Églantine (Evelyn Rompré); his mistress, Cassiopée (Eve Duranceau); his tax collector, Rose (Kathleen Fortin); and a victim of one of his robbery schemes, Aurore (Éléonore Loiselle). In their verbosity, simplicity of staging, and plein-air settings, these elongated tête-à-têtes suggest community theater, albeit with the snap and vigor of actors in full command of the comic and tragic turns in Côté’s material – a distinction that separates Social Hygiene from the amateur-driven and superficially similar work of Jean-Marie Straub and Danièle Huillet.

Antonin (Maxim Gaudette) is a bit of a dandy. He has a way with words that could have made him a famous writer, but instead mostly serves to get him out of trouble. Torn between twin urges to be part of society and also to escape it, his charm and wit are put to the test by five women who are about to lose their patience with his live and let live attitude: his sister, his wife, the woman he desires, a tax collector, and a victim of his mischief.

Marrying a contemporary setting with classical costuming and a narrative and dialogic mode that feels freshly-inked from the pen of Shakespeare or Chekhov, Social Hygiene marks one of the most playful responses to the severity of the pandemic that we have seen yet. Adhering to social distancing guidelines, Côté makes the interesting decision to use spatial separation and camera location to convey the physical intimacy and severances between malcontent Antonin and his many sources of woe.

Though these one-shot sequences comprise the majority of Côté’s film, there are also jarring detours from this established stylistic mode. In a handful of wordless scenes, well before she holds court with Antonin in Social Hygiene’s climactic exchange, Aurore is introduced wandering with seeming aimlessness through the woods. Unlike the rest of the ensemble, who wear gowns, suits, and other casual attire redolent of past eras, she’s dressed in blatantly contemporary clothing, and her crew-cut hair and penchant for dancing freely in the woods announce an unabashedly modern woman. Côté shoots these scenes with a handheld camera and employs more up-tempo editing, creating a formal disruption to match the one that Aurore will ultimately enact on Antonin’s sense of complacency.

There are references to Facebook, McDonald’s, and the Seoul Olympics, but everyone’s manner of speaking—so eloquent and musical—evokes Age of Enlightenment mores, and the verdant landscape shots recall those of Stanley Kubrick’s 18th-century-set Barry Lyndon, the margins of the frame often smeared as if to mimic the imperfections of a painting. That this classical backdrop is host to scenes in which women hold a man in check marks a distinct inversion of the power dynamics of the eras being invoked, and herein lies Côté’s satirical aim.

The modern world has, of course, done much to topple the straight white male off his ill-gotten perch, and Côté has a bit of fun imagining what it might have looked like had this social rebalancing occurred centuries earlier. In the film’s ambiguous, anachronistic flattening of time periods, Antonin’s very body language seems to sag under the contemptuous gazes of his female foils, his romantic gestures are as wilted as the rose he impotently offers to Cassiopée, and, when moved to challenge the only other man in the film to a duel, the two simply circle each other with fists raised instead of reaching for flintlock pistols.

Antonin’s run-ins with Dolores Umbridge, as the reminiscent creditor Rose (Kathleen Fortin), whom he dubs a “racist shrew’” as we learn our lead has some ethics to go with his few morals, and with Aurore (Éléonore Loiselle), the woman whose laptop and leather jacket he stole three nights prior, offer a little more tonal variance. Still, such is the film’s brevity that the lack of any real depth in these encounters is very much in keeping with the film’s DIY style. Watching Loiselle cavort around to “Kiss Me Until My Lips Fall Off” is about as kinetic as the piece ever gets but is a real highlight that promises to stick in the mind.

Ultimately, Social Hygiene makes no qualms in admitting what it is – a fun and fancy-free response to COVID restrictions, shot on a shoestring budget with a band of talented creatives who are game for a bit of cinematic theatre. Though the intrusive diegetic presence of noisy crows, moo’ing cows and passing traffic is part of the intended sound-scape. But what Côté and his collaborators have created here is an enjoyable and inventive distraction from current events.

Denis Côté’s Social Hygiene shared the Encounters Award for Best Director at the Berlin International Film Festival in 2021. He has directed 20 films in less than 17 years. It is best known for his documentary Bestiaire (2012), a picture book of mutual observation of animals and humans at a zoo, as well as his Vic & Flo Saw a Bear (2013), about two lesbian ex-cons trying to make a new life in the backwoods of Quebec. His largest budget film was Boris Without Béatrice (2016), about a man having an extramarital affair to deal with his emotional needs while caring for his terminally ill wife. Côté, who seems to make at least one film a year, considers his favorite filmmaker to be Rainer Werner Fassbinder, who made 44 movies in 16 years.