Los Angeles, CA (The Hollywood Times) 2/27/21 –  Often, science fiction provides a metaphor for how we understand the world around us. Debris stars Rainn Steele and Jonathan Tucker as two federal agents forced to come to terms with a paradigm shift that changes their world. Tucker explains, “We grow up thinking that when you drop something it lands, and that matter is not created or destroyed, all these basic understandings of how the natural sciences work. Then all of a sudden, something from outer space comes and changes that perspective. That’s very exciting and scary and dangerous and beautiful and makes us question who we are and who God is or isn’t. That’s a very existential journey to go on.” To examine these questions, Debris focuses on how individuals navigate a world with alien technology. Tucker continues, “one of the unique parts about the show is that week to week, a new piece of debris is discovered. And it allows us, as partners and the audience, to discover the unique capabilities that this debris has to offer, how it affects people and the world, and ultimately how it affects our own relationship and the people who discover it.” In the pilot, technology does multiple things: makes objects vanish, forces individuals to recall memories, and sometimes enables dead bodies to reanimate.

Debris’ pilot focuses on the two federal agents as they find what appear to be levitating dead bodies in the middle of a cornfield. To unravel the mystery, the agents follow a potential lead to a house, where they find another levitating body in the front yard. This leads to information about a dead boy, and the agents must solve the mystery of how this alien technology relates to this dead child.

Tucker describes, “I think what we do on the show and what the question asks is how does that answer reflect on who we are and how we experience our lives on Earth? I think that’s what’s kind of fun in terms of the differences between these two characters, that varying experience that they have as the debris reveals more and more about who we are as homo sapiens, but also as who we are as individuals.” During the course of the show, the characters explain their motives for collecting the “debris”, expanding on their personal histories while posing existential questions. 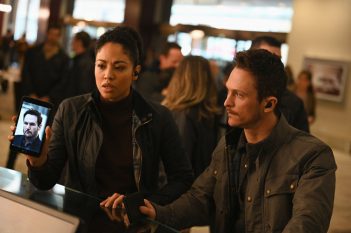 In particular, the characters explore grief as part of the human condition. Steele says, “I play Finola Jones. She is part of MI6, and she also joins the coalition from the UK side under Orbital. And Orbital was a creation of my father. You’re meeting Finola at a very particular point in her journey of grief. She’s just lost her mother and father, but, through duty, is taking on this challenge to continue his work. We follow her along this journey with her partner Bryan Beneventi and how, despite the issues, they find a way to trust each other.” Debris’ exposition presents a conversation between the two protagonists, Finola relating her experiences looking for alien technology to her father’s demise. Similarly, the character then unpacks her feelings and uses this to springboard a conversation with the sister of the dead boy. In another example, Finola finds a piece of alien technology that evokes memories of her dead mother. Thus, Finola’s character experiences grief, and, ultimately, provides an existential discussion about the human condition.