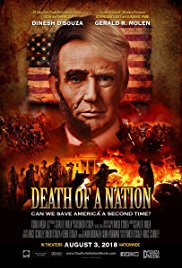 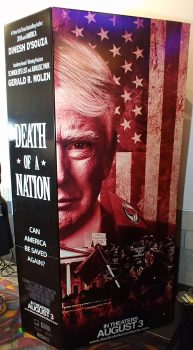 Death of a Nation

Written and Directed by Dinesh D’Souza

The premiere of Death of a Nation took place at the Regal theater at LA Live on July 31st.

This docudrama will certainly be a controversial event. D’Souza, who was pardoned by Donald Trump and is a big supporter, has created a film that is radically conservative and very unusual concerning the facts of the history of the United States. The film has the rhythm of a propaganda film made by the Germans in WW2.

As quoted in the material, “Not since 1860 have the Democrats so fanatically refused to accept the result of a free election. In 1860 the target was Abraham Lincoln. They went to war to defeat him and in the end, they assassinated him.”

The 2016 election and the turbulent events since inspired D’Souza to make Death of a Nation. He sees many similarities and situations faced by Trump and Lincoln. The film is D’Souza’s examination of fascism and racism at home and abroad.

He presents the idea that America has to be saved a 2nd time with the help of Trump and his version of the coming together of America. Through “historical” re-enactments and his examination of fascism and white supremacy, the film endeavors to expose “hidden truths.” The film will certainly be described as right-wing propaganda and to equate Donald Trump with Lincoln and Reagan is quite a stretch.

Artistically, the film is very poor. Rotten Tomatoes gave it a “0” rating which is the lowest score of any film in their history. Michael Moore’s films have fared much better. Trump is certainly no Nelson Mandela or Ghandi, as this film tries to make you believe that he is. The recreations are more satirical than believable re-enactments of history. Of course, there was no mention of the pardon for fraud that D’Souza received. Donald Trump Jr. will host the premiere in Washington DC.

One interesting line was the quote of Hitler saying that “if you tell a big lie frequently enough, it will be believed.” Very familiar. The film tries to make the case that the left is responsible for all of mankind’s atrocities. What is not mentioned is that slavery did not begin in America and has been a major part of the history of the world.

D’Souza puts himself in some of the actual locations where Hitler stood, which creates an almost strange impression that he supports the dictator. He tries to equate the KKK and Nazi party as based on Democratic Party doctrine. The basic impression of the film is one that is poorly made and hastily made with some interesting interviews and many ridiculous tourism scenes that just interrupt any proper rhythm to the film.

With a choral sequence at the end and another musical number with Debbie D’Souza singing very nicely, the results were ok but not necessary in the film. The musical numbers cheapen the message and act more as propaganda.

One person who was nice to meet at the premiere was conservative talk show host, Larry Elder. It would have been good to hear his opinion after the show. It was also interesting to meet Pavel Kriz who portrayed Hitler in the film. I asked if he was afraid of being typecast and received a big smile.  Hitler’s suicide opens the film.

With a little more effort and a balanced understanding, it could have been possible to present a cohesive argument for positive results from our currently strange President.

The fact that the economy is going fairly well and maybe some other positive results from this administration, he could have used this platform to suggest how Trump can stop acting like a foolish celebrity obsessed with the last election who is addicted to twitter, seeing and hearing his name in every other sentence and suggest a roadmap to be taken seriously instead.

This administration needs someone to teach them how to run a government competently and with serious, brilliant and talented people. Sadly, these people who we desperately need will not participate with this President and will join the list of the many people waiting for this chapter in our history to end. Sadly, the messenger is the problem and not necessarily all of the policies. One should at least be a student of history and well-read to hold the most important office in the world.

As D’Souza said at the end of the show to the audience, the major media stations, papers and networks will certainly not review this film or mention it. That is probably true and the main reason is the quality of the film.

Any real ideas were just distorted to an absurd degree to take the film seriously. There was a potential message to be made but it was totally overshadowed by the director’s prejudice. There will certainly be one great fan of the film who we all know.