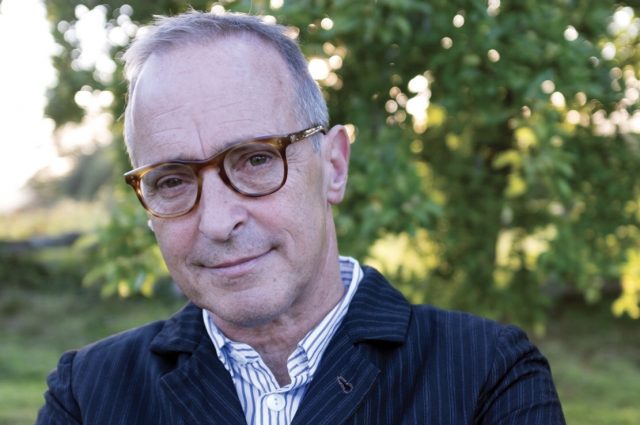 Westwood, CA (The Hollywood Times) 11/19/2018–When David Sedaris ambled purposefully onto the stage of Royce Hall last Friday brazenly sporting sparkling culottes, my reaction caught me off guard.  It was as though I were meeting an old friend for the first time.  It was emotional.

The brilliantly comforting work of Sedaris had been my constant companion during a difficult time in my past.  As I navigated personal tragedy and delved into matters I never imagined I’d face in childhood, I simultaneously delved into the books of Sedaris, one by one.  His essays are as unexpected as they are familiar.  He is a dynamic presence by any standard.

Sedaris, it seems, has unending stores of wisdom.  He understands confusion.  He’s seen sorrow.  And somehow, out of the ugliest parts of life, he is able to extrapolate a completely unique sense of hilarity.  His voice is gentle, almost timid.  All the better for the impact of words that are brutally unexpected for a comparatively diminutive presence.

Sedaris was just at the beginning of a relentless tour that will take him across the country, throughout 2019.  His most recent book, Calypso, is hailed as his “most personal and darkly hilarious” book yet.  For those familiar with his work, that’s quite a statement.  Sedaris seems born for the darkly hilarious, deftly navigating those grim corridors with razor sharp wit and a smug unwillingness to look back.

Sedaris is prolific—his works include The Book of Liz (with sister Amy Sedaris,) Theft By Finding,(a collection of journal entries), Let’s Explore Diabetes with Owls, Squirrel Seeks Chipmunk, When You Are Engulfed in Flames, Dress Your Family in Corduroy and Denim, Holidays on Ice, Naked, Barrel Fever, and my first Sedaris conquest, Me Talk Pretty One Day.

Through all his books, Sedaris’ voice is distinct.  He has the unnerving ability to ramble along with you pleasantly, as though you were taking a walk together, then so suddenly swerving into the traffic of the absurd, you’re not sure how it happened or how you got there.  And there he is, dancing joyfully among the vehicles, while you gasp with laughter, attempting to catch up with his dizzying intellect.

Maybe that doesn’t make sense.  If you’ve read Sedaris, or been to any of his shows, you’d understand.  It’s never a straight path, but it’s always a wildly entertaining one in its twists and turns.  The performance style is always the same.  A lectern, a single light shining down upon it, and Sedaris.  From this position can a voice made up of the satiric genius owned by the likes of Mark Twain, echo forth with great impact.

“Of course I’d give up my seat to a woman who’s visibly pregnant, or wounded” he said during the performance.  “But what if she has a swastika tattoo? In that situation, can’t I just look the other way?”

In this way does he weave in and out of the profoundly simple moments of life.  An accident with his elderly father and a clock.  The time he was given an honorary PHD, and he pondered if it was “necessarily better than the one he earned.”  His beach house, “The Sea Section.”  His love of puns and dislike of arrogant children.  The unappreciated joy of being beautiful and young.  The indecently seductive tone of a recorded voice in the airport.  These are the stolen bits of life he uses to connect with his audiences.  Snapshots into his existence.

I knew Sedaris would be a singular experience.  “I’ve seen him about ten times!” said Larry Fire of pop culture blog TheFireWire.  “You are going to have a blast and laugh till you pee.”  I heard that, but it didn’t really sink it until I found myself unable to breathe because of another blindsiding quip by this master humorist.  I’ve always known I loved him as a writer.  My regard for him has only deepened now that I’ve seen his droll performance skills in action.

As I left the theater, I heard somebody remark “I didn’t laugh at one single thing.”  And that’s when it hit me: I’m so convinced that Sedaris is one of the truly great satirists of this generation, that hearing someone admit they don’t understand his brand of humor made me automatically assume they were, well—stupid.  Or at least operating on a level of ignorance so profound, they can never truly appreciate a man of such understated brilliance.

And I’m OK with that.  As long as the writing of Sedaris is by my bedside, like a wise old friend, life will be a little more bearable, and my perspective a lot more interesting.