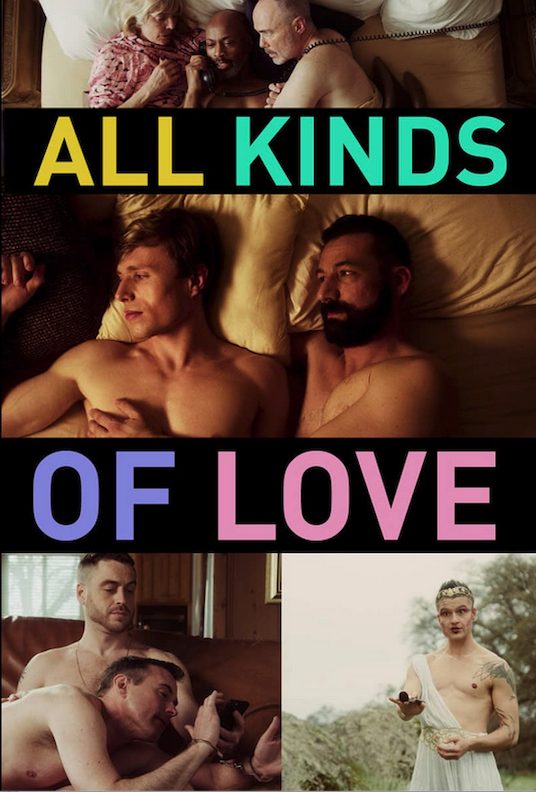 Los Angeles, CA (The Hollywood Times) 7/23/22 – On Saturday, July 23, 12:00 noon, there will be a screening of David Lewis’ All Kinds of Love (2022) at the Directors Guild of America. Set in 2015 against the backdrop of the Supreme Court’s upholding of Marriage Equality, a long-time gay couple divorce just as everyone else is getting married. After his commitment-phobic husband divorces him, Max, a stuck-in-his-ways gay man tries to start over. When he becomes accidental roommates with a younger hip nerd who is as romantically challenged as he is, it looks like there will be something new for Max. All Kinds of Love is a feel-good comedy about people trying to follow their hearts, whether it involves an inter-generational romance, a middle-aged interracial “throuple” or an artistic trans man looking for love in all the wrong places.

David Lewis and his crew pulled together a fun romantic comedy that is light and heart-warming. Some middle-aged viewers will probably relate to this film about being middle-aged and suddenly finding a boyfriend who is quite a bit younger. Any one on the heels of a divorce or the end of a long-term relationship can relate to Max, who has just turned 40. This movie doesn’t have anyone struggling to figure out who they are or how to be themselves in this world. Conrad (Cody Duke), the younger man, is very bright and clear-headed about what he wants with work, but a bit nerdy at times. Age is less a factor in some relationships than some of us think.

Being a gay rom-com, the situations are, of course, a bit over the top. The film opens with a male stripper at a Marriage Equality party in 2015 and for some reasons, Josh (Steve Callahan) decides it is an appropriate time to offer Max (Matthew Montgomery) a ring after they have been today as a couple for seven years already. Max seems less than thrilled. Suddenly, there is a time leap, and the couple is getting divorced and Max temporarily moves into one of the houses that Josh owns and rents out. Max comes home to find his now ex-husband Josh in bed with muscular guy named Pete (Spike Meyer) who meets Josh’s kinky cop fantasies and handcuffs him during sex. It turns out that this is the same guy who was a stripper at the Marriage Equality party. His gig as a stripper is a sidekick from his real job as a local policeman. Max responds angrily and leaves, figuring he has lost all interest in the man he used to love.

Max is on good terms with his parents, Ol’ Jimbo (Jerry McDaniel, Jr.) who is a fairly successful artist and his mother Lila (Molly O’Leary), both of whom seem to be from the 60s and the hippie generation, living together but never marrying. We are surprised that they have a happy, functioning relationship with a third wheel Drew (Mark Nordike), who was their accountant but is not a huge proponent of nude yoga. They are definitely free-thinkers not nearly as rigid in their approach to life as Max is. The three form an amusing distraction within the film’s approach to “all kinds of love.”

Max tries to follow his parents advice and their yoga coach Drew – and begins practicing nude yoga at the house where he is staying. Suddenly a young man arrives with a key and Conrad sees Max completely naked – and, of course, Max is embarrassed and tries to apologize. Conrad explains that he is leasing the house from Josh and Max realizes that he will need to pack up his belongings and leave.

It means returning to Josh’s house and sleeping on the sofa – something he is not very happy about doing because the cop/stripper is too often there with Josh. He can’t bear to stay with his parents, where he finds his father’s art projects with Drew a bit too crazy. Seemingly out of options, he asks young Conrad if he could stay at Conrad’s rented place for a few weeks. And there the story develops into a budding relationship between Conrad and Max.

Spoiler alert: You need to watch the film to appreciate the interesting chemistry between the characters and the way the plot develops. This is not a complex film and it was made with a very small budget. All the actors are professional except for Cody Duke who plays Conrad. What is most amusing at times is the differing view of love that the characters have in their heads and the way they tend to articulate their views. For Cody, things can be “very nuanced” or “brutal” – language markers appropriate to his age group, but quite different from those of Max and Josh, or even Max’s parents. The actors seem to have no issue with full front male nudity in a number of scenes, but it is not meant to be titillating but a natural response to their comfort with their own skin.

David Lewis is a writer and director, known for his previous films Redwoods (2009), Longhorns (2011), and Ranchlands (2019), several of which have been included in previous Outfest film festivals.  All Kinds of Love recently screened in San Francisco as part of Frameline.