The “Cool Kids” actor explains why he wasn’t interested in the ’90s flick. David also looks back at his years at school alongside Angela Bassett.

From running into Kirsten Dunst in the club ten years after costarring with her on “Jumanji” to Debra Messing’s sassy rock out, hear David Alan Grier spill all the tea!

“Alright, um. My manager sent me a script and she said, ‘I want you to read this.’ Uh, the lead character is a mentally challenged man. His best friend is mentally challenged. Now already I’m funky. I’m like, listen if I’m going to be playing a mentally challenged person, I got to be the lead, I can’t be no mentally challenged side kick. It was ‘Forrest Gump.’ So I read 20 pages and I said listen man, I’m not going in on this. He’s talking about shrimp the whole damn movie, no, nuh uh. I don’t get it. I don’t get it. So uh, she called me three times, she called me three times. She’s said, ‘The director loves you, Tom, everybody.’ So, oh, it gets worse. It gets worse. Cut to a year later, we’re in New York, same manager…Let’s go to a movie. We go to ‘Forrest Gump,’ 7 minutes in I’m like ‘Damn, he’s talking about shrimp. It’s in my soul, I feel it.’ And I was like, ‘Why didn’t you…’ She said, ‘Shut up. I sent you that script three times and you never went it in.’ So that was lesson learned, it was all on me, and I screwed that up.” – David Alan Grier on turning down the role of “Bubba Blue” in ‘Forrest Gump’

“Angela Bassett. Let me tell you something about Angela Bassett. We were, she was in undergrad there, so we were grad students and she was doing plays with us. She was excellent. We just needed bodies, you know, people, and she was an excellent actress. I remember I saw her do ‘Antigone’ in this little black box theatre, and she was Angela Bassett. Like, I should have gave her an Oscar that night. Trust me, it was all there.” – David Alan Grier on making out with the Oscar winning actress while they both attended Yale School of Drama

“One morning Debra Messing’s trailer was right next to mine and she was blasting ‘Les Mis,’ you know the Broadway cast. And she was standing in the trailer door with her hands on her hip and she was all sassy. I said, ‘Debra what’s up?’ She goes, ‘Sometimes David, I just need to rock out.’ It was…It was in history, this was the whitest, most Caucasian moment in the history of this planet. So she blasted it and she’s like, ‘I don’t even care.’ Wait, so this other white chick, who was like one of the PA’s, she walked by and she looked at Debra, she sucked her tea, she goes, ‘I swear to god, I went to acting school with a b*tch just like that.’ I fell out!” – David Alan Grier on working with Debra Messing

“She would bring Kirsten Dunst and the other little kids in her trailer and let them curse…She would say, ‘You guys can curse here and just don’t tell your moms and dads.’” – David Alan Grier on being on the set of ‘Jumanji’ with Bonnie Hunt

“Cut to about ten years later…I see her [Kirsten Dunst] in a club and she’s like ‘Oh my god, David Alan Grier. What are you doing here?’ And I was like, ‘I’m trying to sleep with your friends.’” – David Alan Grier on seeing Kirsten Dunst at age twenty two in a club, ten years after working together on ‘Jumanji’ 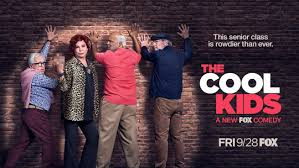 “But here’s what happens…They wrinkle up my eyes, I’m all old and dusty. As soon as there I’m like, ‘Oh, I think have to go to the bathroom.’…‘Guys cut! David, he’s an old man, he’s gotta, don’t let him pee himself. Get him to the bathroom!’ I was like ‘Okay, okay.’” – David Alan Grier on playing an older man in his new show, ‘The Cool Kids’

“You know people on the internet, social media, they ain’t got no chill. They’re like, ‘What happened to you, dog? That’s not funny, you old as hell. But he was young like ten days ago. What, what in your life is going on?’ And I was like, ‘Whatever.’” – David Alan Grier on posting a picture of himself in full hair and makeup from the set of ‘The Cool Kids’ on Instagram