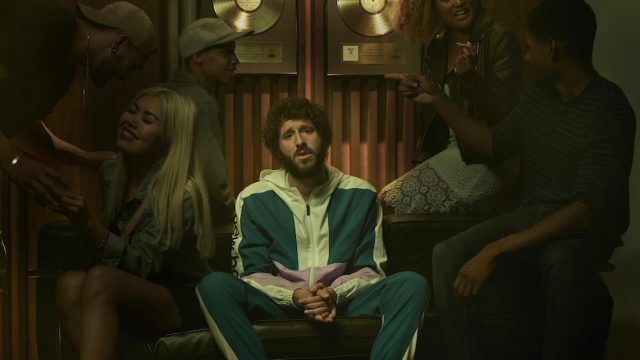 New Jersey (The Hollywood Times) 6/19/21 – David Burd aka Rapper Lil’ Dicky is the star of the tv show “Dave” which airs on FXX which has half hour episodes.  Dave is not for everybody and that is how I’ve seen others reviewing it.  This makes sense because even as a rapper Lil Dicky makes songs that aren’t for everybody. Yet he does make different songs for all different kinds of people.

I challenge you to check it out because it does a great job at developing its characters and telling a story each episode.  I cried at the end of the second episode and I wasn’t even sure why.  I appreciated the effort being given by the show to push boundaries.  I’d compare it to Curb Your Enthusiasm but Dave is way more elusive, less obvious, and even he is surprised at the feelings he uncovers within himself each episode.  The things that are said and the way people act seems so foreign yet so real.  Something that other artists will relate to in this situational dramatic comedy.

Dave breaks and makes the rules as an up and coming rapper who wants all the credit and at the same time none because he’s afraid he might not enjoy it.  He’s afraid he might not deserve it.  This is not unlike many Americans who suffer from fear of success.  Many of us who cannot finish writing a rap, can’t commit to studio time, can’t talk to the girl, or whatever other self deprecating feelings we have going on inside.  These are all things that Dave explores in a creative way where he occasionally uses a rap or song to breathe life into the art. This new season seems like it’s going to lead to more seasons of Dave!