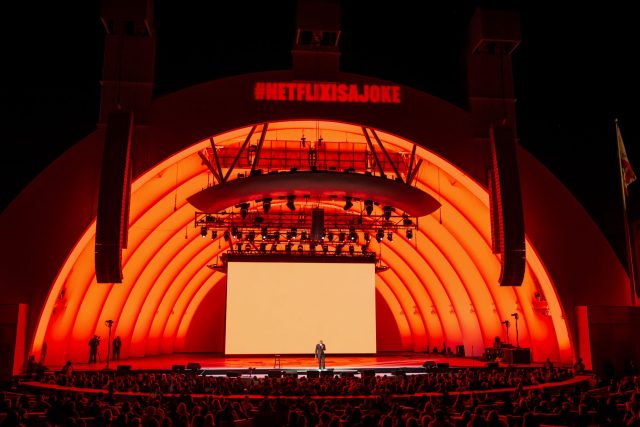 HOLLYWOOD (The Hollywood Times) 5/1/22 – It was the second of four sold-out nights for Dave Chappelle and Friends at the Hollywood Bowl, kicking off the 11-day Netflix is a Joke comedy festival in Los Angeles. How the streamer got 250 live shows in 30 venues from I-lost-count-how-many of the top comedians working today up and running this smoothly is a miracle, probably something to do with algorithms. Their video game is so tight that you’re tempted to just watch the huge hi-def screens that dwarf the performers, making the evening rather like watching a Netflix special in your living room with 17,500 guests (plus a sprinkle of rowdy drunks you wouldn’t bring home.)

If you haven’t been to the venerable Bowl since before Pandemic, it has changed a little. Parking is 50 bucks. They take your phone and lock it in a pouch provided by the Yondr company (founded in 2014 by a 27-year-old, and changing everything from doctors’ offices to Superior Courts), which makes it really weird for reporters who can’t so much as check the time.

Luckily I own a watch, so I can tell you that Chappelle did a 60-minute set, not a minute of which was wasted. Not for nothing did Chappelle win the Grammy Award for Best Comedy Album three years in a row, or the prestigious Mark Twain Prize for American Humor. He’s masterful.

We are so familiar with Chappelle as a personality, a newsmaker and controversial flashpoint that we sometimes forget what a skilled comedian he is. His writing is so smart, so tight; his delivery is so unforced. He can do accents. He can do impressions (his Chris Rock is spot on) and he can spin a meandering tale that cycles back around to a punchy callback, then turn it into a discourse on the human condition.

Does he step on third rails? Of course. But he only promised not to talk about certain things on TV, and this isn’t technically television. Plus, as he shrugged knowingly, “I’m already canceled.” So, why not? Looking like an escapee from the Rat Pack in a suit and tie and chain-smoking cigarettes, Chappelle touched on subjects ranging from the war in Ukraine to the infamous Slap to, unexpectedly, the aspirations of L’il Nas X.

The thing about Chappelle is that his humor is transgressive without being hateful. He exhibits a self-knowledge and empathy that many comedians simply can’t access. Take opener Donnell Rawlings — whose set lasted for a week and a half, but that is subjective — complaining about all those WAP ho’s who be only wanting a man’s money. That’s a world away from Chappelle’s old line, the sly wink “What could I possibly be saying that would make these bitches think I hate women.”

Where Chappelle does impressions, Rawlings makes fun of people’s accents. There’s a difference.

Guest comedian Bill Burr (each night features different Friends) also likes to stomp on a third rail or three, but he manages to say what people are afraid to say for fear of looking hateful… without looking hateful. Emcee Jeff Ross did a damn good job of doing crowd work with a crowd of seventeen thousand, which is quite a feat. Interstitial music was provided by DJ Trauma, who has been working with Chappelle since 2013.

The closing act, different each night, this night was veteran hip-hop artist Busta Rhymes. Much of the crowd, there for the jokes, filed out during the set. Walking past the Yondr crew, they grabbed their unlocked phones with the ferocity of a starving man grabbing a hamburger.

The Netflix is a Joke (https://www.netflixisajokefest.com) festival continues through May 8, and includes performances by everyone from Aziz Ansari to Michelle Wolf. (There might be a comedian whose name starts with Z, but I didn’t see it.) You’ve got Arsenio Hall at the Hollywood Roosevelt Hotel, Gabriel Iglesias at Dodger Stadium, Chelsea Handler at the Wiltern… we could keep going for pages. Plus there’s a boatload of free events outdoors at the Hollywood Palladium.

As Dave Chappelle points out, the trick is not to laugh at one another, but to laugh together.

NETFLIX IS A JOKE FEST

through May 8 at venues throughout Los Angeles