There’s no doubt celebrities help sell cars. Matthew McConaughey in a Lincoln, J Lo in a Fiat, Will Ferrel in a Dodge…but what happens when a famous rockstar’s daughter helps sell a new Bentley tricycle for kids? Enter 11 month old Violet Skye, the daughter of rocker Chris Clemence and his fiancé Tessa Knox.

Look out Dad; we have a new star in the family!

“I’m so proud of her”, says Clemence, “she’s not even a year old and already she’s killing it. She obtained an endorsement with Posh Baby and Kids for their new Bentley Tricycle and next thing we know she’s getting all this attention on social media. It quickly led to doing this commercial, and now she’s becoming a star in her own right. She just has that special something…she was born with it…the “it” factor. It was super cool to be featured with my family in this. Violet and Tessa are really the stars of this.

I’m excited for it to come out! We worked with an all-star team, having Jason Wisch direct.”

The ad, which will be premiering at the LA Fashion Festival at The Globe Theater, also teases a new upcoming track “Anything Is Possible” from Clemence’s band “Bad Blood”. The new record will be released on Extreme/SONY. Clemence is known for his previous hits “California Brain”, “Can You Feel It”, and “Let’s Go” which is the anthem for the NY sports teams in the NHL, NBA, and NFL.

There’s also a surprise twist at the end which is pretty funny. Was an on the spot decision that Jason (Wisch) came up with and I think it’s the perfect way to end the story”, said Clemence.

The Bentley tricycles were designed to exude a luxurious aesthetic with the world famous Bentley style in mind. Even the wheels on these tricycles are an exact replica of the Bentley car. The Bentley trike also innovatively transforms as toddlers grow from a stroller to a full tricycle that all children love driving by themselves once they are ready. 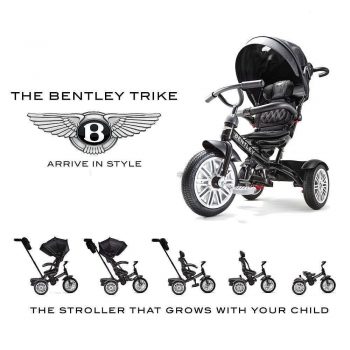 “I’m jealous of her trike, if I could fit in it, it would totally be my full time ride”, joked Clemence, “But seriously, I’m proud to have this tricycle for her. I wish I had one when I was a kid. I see how much Vi loves it and it makes me happy knowing she enjoys it so much. We constantly get stopped on the street by people asking where they can get one. Every friend we have who has a young child wants to ditch the stroller they have and get one of these. And I don’t blame them! Every kid deserves one of these.”

You can get your own Bentley trike today at www.bentleytrike.com