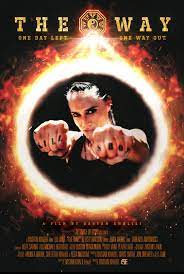 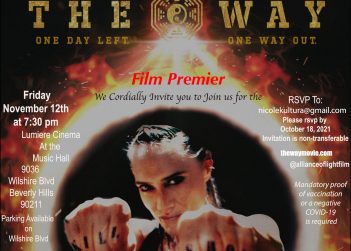 The Way is the story of Jane Arcs (Eli Jane), who thirteen years ago was condemned to death after brutally killing her opponent in an underground street fight. Now, in just 24 hours, Jane will be executed for her crime. During her years on Death Row, Jane has undergone a major evolution under the tutelage of a fellow inmate and Qi Gong Master Xin (Joan Wong/ the niece of Kung-Fu Master Wong Jack Man, who was best known for his controversial duel with Bruce Lee in 1964), learning the way of Qi Gong and ostensibly gaining supernatural abilities. As the day of her execution arrives, Jane embraces her punishment in the spirit of transformation. Max Stone (Kelcey Watson), Jane’s boyfriend as well as a correctional officer and part of the execution tie-down team, has very different ideas. He is willing to do anything to save Jane.

I was able to catch up with Dastan to speak in depth about his movie before the premiere. 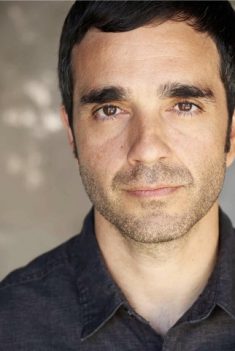 1. One of the statements you made in the press release was breaking down the gender boundaries. While the female MMA fighter lead is certainly masculine in her presentation, the movie explored a real feminine side of her: the fearless protection of those she loved, including her love interest. Can you go more in-depth on how those barriers were broken down in your movie?

My great desire in acknowledging the balance of masculine and feminine and the quality of the feminine, in general, comes from being raised by very strong women. In The Way, we follow a lead character who is a woman through all of the challenges and difficulties of her life, how she’s impacted by loss by grief by transformation and challenges using both the softness and the gentleness of the heart and the power of her mind and spirit. This is an acknowledgment of the feminine from the core of Mother Earth as being a feminine energy to our own very mothers. For me as a filmmaker it is supremely important to express and acknowledge this, and that in and of itself creates awareness and transcendence.

2. The multicultural angle is another good goal of your movie. I do want to question how you accomplished this. In a way, I felt that the Qigong Master Xin almost fell into somewhat frequently used stereotypes: the martial artist. What made this different, besides the gender of the “teacher”? 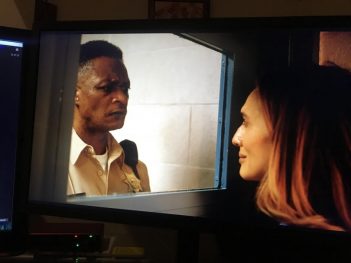 I have grown up in a multicultural life and a multicultural family so expressing that and that kind of general worldview is very important to me because the richness in the fabric of our planet and all the cultures within is one of the things that makes it so profound and compelling. In regard to the character of Master Xin, I actually spent the previous six years on a documentary film called Master which I wrote and directed. Master Zhou and the other masters with whom we spent time, informed the creation of the Master Xin character. Then through the rehearsal and creative process with Joan Wong, the actress who plays Master Xin, we ultimately developed what you see on screen.

3. I did enjoy your treatment of the romantic relationship between Jane Arcs and Max Stone, especially that of inmates and outsiders. Was there a real-life inspiration behind this, that made this so real and organic?

After completing the documentary Master and then coming across Victor Hugo’s short novel “The Last Day of a Condemned Man,” which is about capital punishment in the 18th century, I thought it would be incredibly fascinating to put a character in that position who also goes through the transformation of spirit. The performances and the intimacy that you see between our two actors were based on not only talent but a great deal of rehearsal working together and developing a level of trust that allowed that space to happen. Life experience in all of its facets can inform and elevate art in the most beautiful way.

4. What are your feelings about redemption? After 13 years, and your treatment of the personal evolution of Jane Arcs on death row, do you believe people can be changed?

I was raised with the model that anything is possible. If you are seeking redemption and your heart is pure, you will most certainly reach it. Transformation is inevitable, and people do change and transform in one way or another. What is very interesting and compelling to me especially in this particular story is taking total responsibility for that. Once that clarity is reached, then any potential is possible, any direction is possible and Jane is a cinematic example of that.

5. Similarly, we see the reasons why Jane Arcs was on death row. Do you think that it was justified for her to be there and to receive such a harsh sentence when it seems she really is no threat to society?

The society that we live in and the laws that govern it are one thing. Humanity, compassion, empathy, and forgiveness are another. There are certain cross-sections where these things go hand-in-hand but it is rare. The story of Jane is one that comes from a lower economic income part of society, and all of the burdens and judgments that go with that, so it was important to maintain a certain value of that truth within the impact and effect of what happens to her.

6. Winning film festival awards and honors, as well as this new acquisition, where do you see the film going, and what will be your promotional efforts going forward on this?

My intention for this film of course is for as many people as possible to see it. So all efforts will be geared towards making that happen. My father always quoted the famous Persian poet Rumi who said one person is like 1000 people. I want to share this story, this art, this experience, with as many individuals as possible and so all efforts are directed with that clarity of intention.

7. What kind of movies are ahead for you? I am interested in your background growing up in Iran. Will that come into play in future productions?

Thank you for taking the time Marc. I really appreciate your insightful questions and this interview. I’m currently on the third draft of my next film project. It will continue to maintain the dimension of spirit with the action of martial arts and is geared towards a story about two younger girls who are living on the road. They become friends and fall in with a secret society of thieves. It is a really interesting and fascinating story and I look forward to making it and sharing it with the world. I grew up both in Iran and in Hong Kong through my formative and teenage years, as well as in the United States. Traversing back-and-forth through all of these different cultures most definitely informs all that I do, think, see, and feel – the multiplicity of my experiences, the richness of my life, and what I have seen. I wish to share those aspects and those wonderful gifts that I received with as many people as possible through my art of filmmaking. Thank you so much.

Born in Tehran, Iran, Dastan Khalili moved permanently to the United States at age 9. He began his filmmaking career in 1995 after graduating with a Bachelor of Arts degree from the Pomona University Theater Academy. The award-winning director’s first feature Insomnia Manica garnered the best feature and best director at the NYC Independent Film Festival (NYCIFF) in 2005, and his documentary Earth Turns To Gold won the best documentary feature and best documentary director at NYCIFF 2010. In 2011, he was awarded best environmental documentary director at the New York Film Festival for his film Making Of A Dream. Khalili has a wide range of directing experience including features, documentaries, educational films, music videos, and theatre.  He is a member of the Director’s Guild of America.

Dastan can be found on social media @dastankhalili and on his website https://www.dastankhalili.com/