Los Angeles, CA (The Hollywood Times) 2/1/22 – There has never been a documentary quite like Daniel Roher’s Navalny (US, 2022), a late addition to the Sundance Film Festival’s 2022 US Documentary Competition, and by turns easily the category’s funniest and most bleak title. It’s safe to say that no one has ever captured moments like Daniel Roher and his crew does: A politician investigating their own poisoning, using that information to prank call the accomplices, and then watching him be arrested in his home country. It is not surprising that Navalny turned out to be the festival favorite and garnered the Audience Award for Best U.S. Documentary. It will be showing on CNN Films and HBO Max later this year. 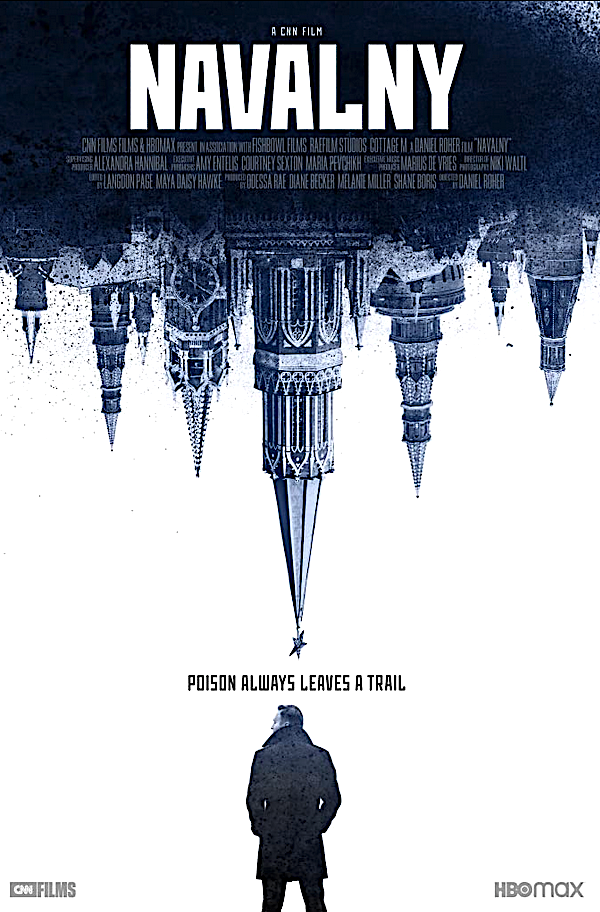 The hero of this documentary is none other than Alexei Navalny, a politician, political activist, and savvy media figure who has spoken out against Vladmir Putin in Russia in the past, and tried to run against him. The Kremlin hates him, clearly. Putin won’t even say his name during press conferences. Navalny was poisoned by the Kremlin in 2020, creating a type of media circus once the flight which he was on had to make an emergency landing. The conspiracy persisted, with medical officials whisking him away before eventually deciding to release him to his family where he could get medical attention in Germany.

For the Canadian filmmaker Roher, those circumstances make his film Navalny the most high-profile non-fiction close-up of a pivotal political figure. “The more his name is in the headlines, the more magazine covers he’s on, the more people this film reaches, the safer he will be,” Roher said in an interview last week. “It will be harder for the regime to murder him in prison if he is occupying space in the global conversation. I think that’s what our film seeks to do: To make sure his name is front and center.” When the film was first announced, Navalny posted on Instagram that he had hoped to attend the film’s premiere in a tuxedo and with a glass of champagne. “But I will spend it – as usual – in boots, a prison uniform and with a mug of tea,” said Navalny, who is serving 2 1/2 years in prison for violating the terms of a suspended sentence stemming from a 2014 fraud conviction. Just last week, the U.S. State Department called the terrorist designation of Navalny “troubling” and a “new low” in the government’s moves against opposition figures.

In August of 2020, the journalist-comic-dissident-politician Alexei Navalny noted how strange it was not to be hassled by police while campaigning in Siberia. He would find out why he received such gentle treatment on the way home, when he became violently ill. On the long flight from Siberia to Moscow, he would have died had the pilot not made an emergency landing and arranged for emergency life-saving measures at the nearest hospital. When his wife managed to get him to a hospital that wasn’t overrun with Russian agents, in Berlin, doctors declared that Navalny had been poisoned with Putin’s signature murder weapon: Novichok, a lethal chemical that can infect merely by touching the skin. Putin might as well have left a signed autograph on a knife before plunging it into Navalny’s back. “Murder,” says Navalny, “is a terrific way to solve problems. But once you’ve started killing, it’s hard to stop.”

At its most fascinating, Navalny takes us through the detective work of a Bulgarian ally named Christo Grozev, a data miner who blandly describes how he goes about obtaining flight manifests from a travel agent to whom he paid only 25 bucks’ worth of cryptocurrency. By gobbling up mountains of such data, Grozev was able to figure out the identities of the members of the assassination squad who traveled from Moscow to Siberia when Navalny did, and to run down their phone numbers. After he recovered from his murder attempt, Navalny began methodically calling each man in the crew to confront them about what they’d done: “I was hoping you could tell me why you wanted to kill me,” he’d ask, getting a dial tone in reply.

After Navalny published this call on the Internet, Putin made light of the whole situation at a press conference, answering questions about why there was no criminal investigation into the attempt on Navalny’s life with claims that his antagonist is a CIA asset, adding with a chuckle, “Who cares about him? If that was the intent, they would have finished him off.” Kudryavtsev, though, subsequently disappeared, indicating that the inadvertent confession to the attack was indeed important to Putin.

More fruitfully, we watch as Navalny assumes a fake identity as an intelligence bureaucrat and calls one of the scientists involved in producing the Novichok to get him to discuss how the chemical was planted on Navalny: in his underwear, at the crotch. “We did it just as planned,” pleads the scientist, Konstantin Kudryavtsev. “The way we rehearsed it many times.” Whenever Kudryavtsev avers that it isn’t appropriate to discuss such matters on a non-secure phone, Navalny keeps him talking anyway.

Navalny, who was in a coma for five weeks after the murder attempt, decided as soon as he woke up that he’d return to Russia and take whatever punishment Putin could dream up. The documentary vibrates with tense images of his nervy flight home, during which he was accompanied by a mob of journalists. We watch as Navalny strolls through the airport and up to the passport controllers – at which point we lose sight of him when the police say, “Come with us.”

Brief interviews with Navalny’s wife and college-aged daughter make it clear that the family respects and honors his wishes to continue fighting to liberate Russia from Putin’s grip, but you would think at some point, someone would convince Navalny that he won’t be able to make any kind of stand against Putin if he gets killed. After having been attacked with chemicals three times by the regime, Navalny might be wise to stop proving his courage and think more strategically.

Throughout the film, we meet Navalny at a bar, in what seems like modern time. He shares his perspective and attitude in a stark interview, showing his persistent sense of humor and lack of ego. It’s a glimmer of what Russia could look like under a warmer, down-to-earth leadership, all the more sobering when you realize it’s not the latest part of the film’s chronology.

This cinematic portrait of one of the bravest men on earth will burnish Navalny’s profile and slightly increase the pressure on Putin to let Navalny go free, or at least to let him live. Navalny is currently and indefinitely an inmate at Pokrov Penal Colony No. 2 (60 miles east of Moscow), locked up on spurious charges. He is the world’s leading political prisoner.