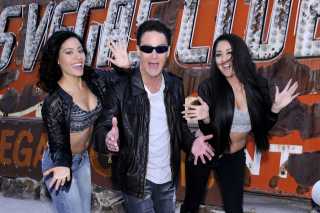 Pandemonium and Mayhem on the streets with the best in uncensored ad lib comedy skits with Jimmie Lee-The Jersey Outlaw and his wild and crazy comedy TV show.

LAS VEGAS, NV July 17, 2019 — Jimmie Lee-The Jersey Outlaw recently took his wild and crazy street comedy to Atlantic City to shoot for his hit comedy reality TV show, Dangerously Funny. The show is in Season 3 and rated one of the top comedy shows on reality TV.

Jimmie Lee has branded with a unique brand of street comedy that combines one liners, insults and zingers with an old school style and some Jersey attitude. The reason the show works so well is as Jimmie says, “We are doing 80’s style comedy that’s a mix of Rickles and Dangerfield, that people don’t do anymore, definitely politically incorrect and off the wall, very high energy and the fans love it cause it’s different.”

So away we go, as Jimmie hits the streets with his signature look, the leather jacket and dark sunglasses with security by his side, jostling and kibitzing with the crowds, as he performs ad lib street style comedy, creating a scene wherever he goes. Jimmies off the cuff delivery, coupled with his dynamic persona are trademarks that have made The Jersey Outlaw a big name in the comedy world! Nobody’s safe when Jimmie hits the streets. It’s pandemonium and mayhem, no holds barred, uncanny and most definitely unpredictable.

Jimmie Lee took Atlantic City by storm and everyone was ready for The Outlaw. Fans from all over the country were in town for the July 4th weekend and they all embraced the pranks and antics of The Outlaw. Chants of “Go Get Em, Jersey Outlaw” were heard throughout the day and several fans were involved in scenes for the TV show and thoroughly enjoyed the funnies.

Scott Cronick from the AC press caught up with Jimmie Lee and couldn’t believe the excitement and enthusiasm of the fans and their reaction to Jimmies schtick. Jimmie had this to say about the show, ” I’m so happy that the fans are so engaged and enjoying the style of comedy that I do, as its different and really over the top, it makes me feel good to make people laugh and be entertaining and I feel good about the show’s success.”

The show plans to shoot this summer in Rome and Paris and in the fall in Hollywood. Comedy is universal and Jimmie Lee is taking his comedy worldwide.

The Garden State can take pride to one outlaw of a good nature, That’s Jimmie Lee and he’s one of a kind.