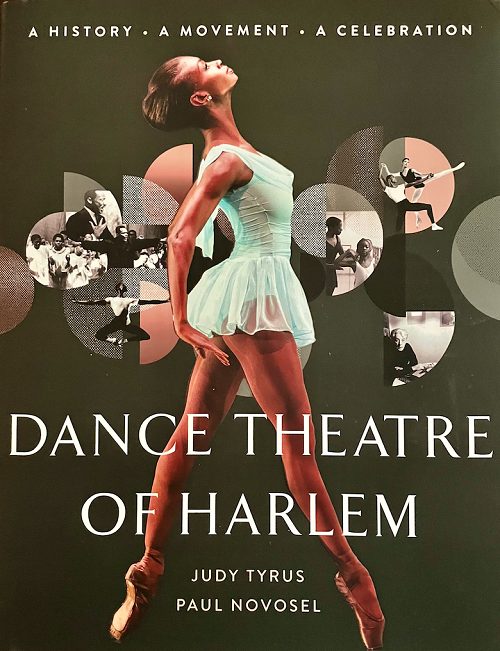 There is a new coffee-table sized book coming to bookstores in late October and it is Dance Theatre of Harlem: A History, A Movement, A Celebration (Kensington Press, 2021), by Judy Tyrus and Paul Novosel. I am delighted to have an early copy of this fine book ­– thanks to Michelle Addo and the people at Kensington Books. Filled with beautiful photographs, this book relates the story of the Dance Theatre of Harlem from its modest beginnings in the 1960s in a Harlem church basement, to its meteoric rise to international fame. The mantra of Dance Theatre of Harlem was a simple, revolutionary statement: ALL DO CAN BALLET.  Into the 21st century, as the world, and the country, continue their historical struggles and triumphs, the story of this haven for dancers of all colors and backgrounds resonates more than ever. Here, for the first time, is the definitive portrait of the one-of-a-kind community dance company that reflected – and shaped – our times, and whose enduring principle continues to inspire the future.

With exclusive backstage stories from its legendary dancers and staff, and unprecedented access to its archives, Dance Theatre of Harlem is a striking chronicle of the company’s amazing history, its fascinating daily workings, and the visionaries who made its legacy. Here you’ll discover how the company’s founders – African-American maestro Arthur Mitchell of George Balanchine’s New York City Ballet, and Nordic-American Karel Shook of The Dutch National Ballet – created timeless works that challenged Eurocentric mainstream ballet head-on – and used new techniques to examine ongoing issues of power, beauty, myth, and the ever-changing definition of art itself.

Arthur Mitchell was the first African-American principal dancer in a major ballet company, the New York City Ballet. Mitchell was sent to Brazil by the United States government to start up the National Ballet of Brazil. While on his way to the airport, he was shocked to hear news of the assassination of Martin Luther King, Jr. In conjunction with the civil rights movement, Dr. King’s death inspired Mitchell to forgo his plans in Brazil. Instead, he founded a classical ballet school for the children of Harlem, the poor and predominantly black New York neighborhood where he was raised.

Luckily, Karel Shook, the first ballet teacher and a former ballet master at Dutch National Ballet, agreed to join him in founding the school. At the time, Shook was the best and only teacher of European descent willing to train African Americans in classical technique. Shook believed that “the art of making a dancer is one of the most painstaking occupations in the world. It demands the precision of an architect

Initially founded only as a school, Dance Theatre of Harlem as a company of African American ballet dancers was born out of a necessity to match funds that had been contributed towards the school’s existence. The only way to accomplish this was by earning revenue through performances. The Dance Theatre of Harlem would soon become a haven for dancers of all colors and backgrounds. Following the original blueprints set forth by his mentor George Balanchine. Mitchell groomed the school’s top talent as a group of performers. Though officially incorporated in 1969, Dance Theatre of Harlem would make its official debut with a public performance on January 8, 1971, at New York Guggenheim Museum, with three chamber ballets choreographed by Mitchell. During that opening season, the company’s repertory was supplemented with several ballets by Balanchine and Jerome Robbins; in support of Mitchell’s vision and company’s future, Balanchine had given Mitchell access to all of his ballets.

The Dance Theatre of Harlem (DTH) made its European debut at the Spoleto Festival in 1971. The company produced its first full season in 1974. That same year, the company debuted at Sadler’s Wells Theatre.  In 1984, Dance Theatre of Harlem premiered its most famous work, Creole Giselle (restaged by Frederic Franklin), which was set in the 1840s Louisiana Bayou. In 1988 DTH embarked on a five-week tour of the USSR, playing sold-out performances in Moscow, Tbilisi, and Leningrad, where the company received a standing ovation at the famed Kirov Theatre. In 1992, the company toured to South Africa in the “Dancing Through Barriers” tour that gave birth to the outreach program of the same name that still continues to operate. In 2000, DTH made its inaugural tour to China performing in Beijing and Shanghai.

Gaining prominence in the 1970s and 80s with a succession of triumphs – including its spectacular season at the Metropolitan Opera House – the company also gained fans and supporters that included Nelson Mandela, Stevie Wonder, Cicely Tyson, Misty Copeland, Jessye Norman, and six American presidents (excluding Donald Trump). Dance Theatre of  Harlem details this momentous era as well as the company’s difficult years, its impressive recovery as it partnered with new media’s most brilliant creators – and, in the wake of its 50th anniversary, amid a global pandemic, its evolution into a worldwide virtual performance space. Sadly, in mid-2004 the Dance Theatre of Harlem Company was put on hiatus due to severe financial constraints within the organization. Both theatre and dance began to struggle against the rising tide of internet distraction.

Over the past five decades, the Company has traveled the world creating timeless works that challenge Eurocentric mainstream ballet head-on while examining ongoing issues of power, beauty, myth, and the ever-changing definition of art itself. Their groundbreaking vision for dance fueled DTH’s growth into one of the most influential and revolutionary American ballet Companies in modern history.

Inside the book, you will find photographs of the company’s quintessential dancers Lowell Smith, Stephanie Dabney, Ingrid Silva, Derek Brockington, Da’ Von Doane and Ashley Murphy – and certainly DTH’s founders Arthur Mitchell and Karel Shook. Alive with stunning photographs, including many from the legendary Marbeth and Martha Swope, this incomparable book is at home on a coffee table as well as a library bookshelf for any lover of history, art, or classical ballet.