Los Angeles, CA (The Hollywood Times) 1/10/22 – The Pit, a Latvian coming of age drama directed and co-written by Dace Puce with Jana Egle and Monta Gagane, arrives with the prestige of being Latvia’s submission for Best International Feature Film at the forthcoming 94th Academy Awards. Ten-year-old Markuss (Damir Onackis) struggles to adapt to a new life with his Grandmother Solveiga (Dace Eversa) in a small rural village, particularly after Emīlija, a neighbor’s daughter, makes unkind remarks about his father. In response, Markus decides to teach her a cruel lesson – but when his act is discovered, it has severe consequences which resonate throughout the village, deepening Markus’ hatred of the locals even further. The only person he can relate to is an older man named Juris living in the nearby woods, with whom he develops a mutual inspiration and trust to keep each other’s’ secrets. But only with an accidental turn of events, and a plot for revenge, will Markus’s reputation with the villagers change.

The Pit is based on three short stories from In the Light by Latvian poet and novelist Jana Egle, but Puce and Gagane seamlessly integrated them into one fluid, continuous narrative. As a result, it never feels episodic or patched together. This film is neither light nor easy, but the redemption it provides is deeply satisfying. This adaptation of Jana Egle’s short stories is sort of like a Latvian Short Cuts. It is also a coming-of-age story – a really dark one.

Markuss is a tough kid to love, but we come to understand just how unloved he feels in Dace Puce’s The Pit. The plot’s non-linear skips are suggestive of the town itself, where secrets and suppressions from the past begin to destabilize the present. We see this with the character of Sailor (Indra Burkovska), an older man whom Markuss subsequently befriends. Ostensibly a town loner whose lachrymose nature is initially suggested by this old sea dog unable to take to the waves, we eventually find out that Sailor is a trans man, who grew up recognized as a girl.

Sailor’s gender has never been accepted in this cold-hearted town. Initially Puce deliberately keeps the true nature of Sailor ambiguous, and we purposefully see him via Markuss’ standpoint: A shadowy adult, usually seen via the forced perspective of a neutral child. As it should be, of course, because what business is it of ours or anyone else’s who Sailor is? Director Puce takes care to develop the relationship between the ostracized characters, depicting with diligence the time they spend together as they construct a stained-glass mosaic. 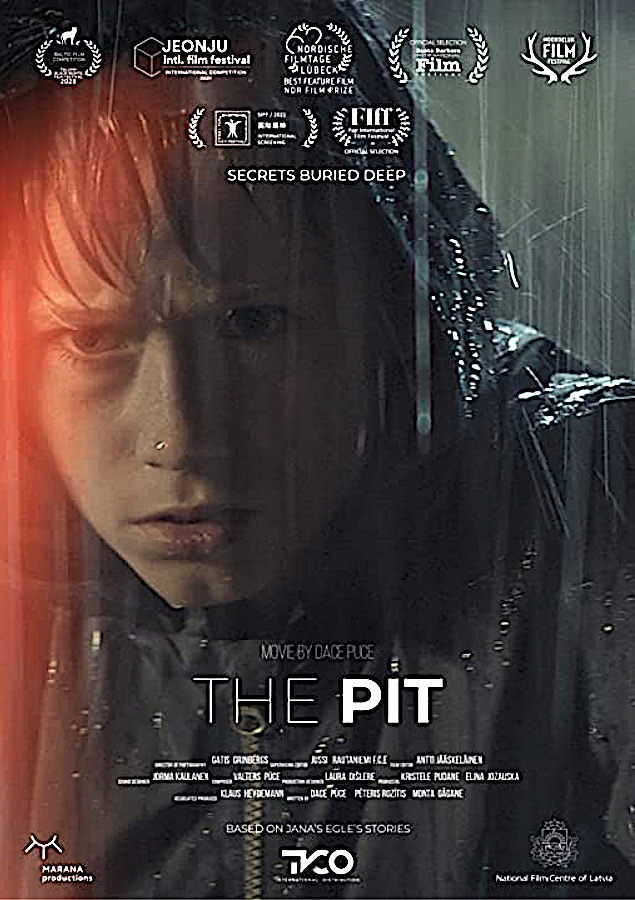 Viewers can also tell some things about how we’re supposed to feel about Markuss by the sheer amount of screen time dedicated to Roberts (Egons Dombrovskis), Markuss’s volatile uncle. Roberts beats his shy wife Smaida (Agata Buzek) and is also prone to emotional outbursts; Roberts is not very sensitive, but he does have enough of a temper to make you groan whenever he re-appears on-screen. And not just because Roberts is a less interesting character than Sailor, Solveiga, or Markuss, Roberts’ scenes reduce him to his all-caps behavior. Still, Roberts is an unfortunately characteristic part of Markuss’ world, which is also potentially revealing.

Markuss is in big trouble, because he lured Emilija, a snotty little princess in his new neighborhood, into a pit in the woods and left her there. He was already a pariah in this provincial town. Now he is considered a monster. His grandmother, who is reluctantly serving as his guardian, seems to openly resent his presence. The rest of his local kin treat him with cold disdain, but their dysfunctional and sometimes abusive behavior behind closed doors is not so very different. His only friend is Sailor, the town outcast, whom his grandmother helps to support, despite her obvious contempt.

Some of the revelations Puce and co-screenwriter Monta Gagane have in store for viewers are fairly logical (a nicer term than predictable, in this case), but the way they emerge organically as the film progresses is still quite potent. There are some flashbacks, but they are employed judiciously and cleanly. After ten minutes, viewers will despise Markuss, but after seventy minutes, hearts will ache for him. It is a drastic dramatic reversal, but it is well-earned.

It also helps that young Damir Onackis’ lead performance is remarkably powerful. He is raw and honest – quiet, but violent. This could very well be the best youthful performance of the year. Dace Eversa surprises us down the stretch as Grandma Solveiga, while the acutely human sadness of Indra Burkovaska’s Sailor is the perfect counterpoint to Markuss’s rage and confusion.

The complexity is extended to the townspeople, whose homophobia is depicted with a sad authenticity (and it is homophobia in this instance; their understanding is not even transphobia yet). Sailor is deemed a “faggot,” which is an ironic recognition of his gender). This is a depiction of a town afraid of itself, fatally suspicious of each other, and turning a blind eye to exactly the wrong sorts of social ills. They are a people confused, and repressed, and the sympathy which The Pit affords these villagers is far more valuable than a simple, blanket condemnation.

The Pit is not preoccupied with Latvia’s tragic Soviet history, but it still plays a role. A slight spoiler: Sailor went through puberty realizing he was transexual during the times of the Soviet Union’s control of Latvia until 1991. It turns out the Communists did not ask people their pronouns. They just threw the “confused” into mental hospitals, which were notoriously brutal. And apparently that was Sailor’s fate in the past.

The Pit was released in the USA on 12/17/2022 on Film Movement Plus: https://www.filmmovementplus.com/.  It is also included in the current virtual screenings of the Scandinavian Film Festival L.A. at https://www.sffla.net/