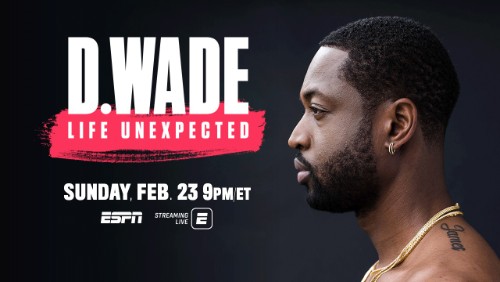 “D.WADE – Life Unexpected is a remarkable movie of a life truly unexpected. Dwayne Wade is fantastic basketball player, a respected man, a wonderful husband, a role model and an incredible father.”

“D. Wade: Life Unexpected,” a new feature documentary from ESPN Films and Imagine Documentaries, debuted on Sunday, February 23, at 9 p.m. ET on ESPN. The film, directed and executive produced by Wade’s long-time friend and cinematographer Bob Metelus, chronicles three-time NBA champion Dwyane Wade’s experience on and off the court as he enters into his final year in the league, and reflects on personal and professional victories and set-backs throughout his legendary career. The film includes scenes from hundreds of hours of never-before-seen home movies, exclusive video diaries, and all-access verité footage shot over the last decade. Imagine Documentaries’ President Justin Wilkes and EVP Sara Bernstein produced the film alongside Imagine Entertainment Chairmen Brian Grazer and Ron Howard, as well as with Academy-Award nominated and Emmy Winning producer, Sam Pollard.

Metelus has had unparalleled access to Wade’s life behind-the-scenes for years. With a tremendous archive, the film explores elements of Wade’s world through his dynamic basketball career and his personal journey, documenting his meteoric rise from Marquette student to global icon, 13-time NBA All-Star and Olympic champion. Through candid home movies and Metelus’ fly-on-the-wall verité footage, Wade takes the audience on a tour through his celebrated career, his deeply personal family struggles and his role as a husband and father all while navigating his final year in the league.

“Bob’s film is a raw, intimate and unfiltered look at not only a super-star athlete, but a father, son and husband who’s continuously risen above life’s challenges to create a better world for himself and those closest to him,” says Wilkes.

Beginning with intimate details about his life growing up in Chicago, continuing on through his emergence as a star at Marquette and then with the Miami Heat, the documentary covers every chapter of Wade’s path. From dealing with drug raids on his house as a young child; to becoming a father as a college sophomore; to the long and painful custody battle for his children years later; as well as his relationship with his wife, actress Gabrielle Union-Wade and the challenges they’ve encountered; and embracing his child Zion’s gender identity, the film does not shy away from the difficult topics. With exclusive behind-the-scenes basketball footage – including extensive coverage of the free agency drama of 2010 and the moment Wade learned LeBron James was joining the Heat – plus interviews with pivotal figures from his life and career including Carmelo Anthony, Chris Bosh, Udonis Haslem, Pat Riley, Gabrielle Union-Wade, the film is a memorable look back at one of the defining careers of this generation.

“I’m excited to share a side of myself with the world that not many people may know,” said Wade. “This deeply personal documentary will give fans a never-before seen look not only at the behind-the-scenes of my sixteen year career in the NBA, but will peel back the curtain on my personal life – the highs, the lows and everything in between –  showing how I created my own path to get to where I am today.”

“Having had the opportunity to bear witness to Dwyane’s career over the years has been a privilege, and I’m honored to have been granted access to capture these powerful moments on and off the court during his journey,” said Metelus. “This is an honest, raw depiction of a truly inspirational man, and I’m thrilled to be able to share Dwyane’s story as a three-time NBA Champion, but also as a father, husband, businessman, philanthropist, style icon and friend.”

ESPN Films has been an industry leader in documentary filmmaking since its inception in March 2008, producing more than 100 documentaries that have showcased some of the most compelling stories in sports. The high quality of storytelling, highlighted by the Peabody and Emmy Award-winning 30 for 30 series and the Academy-Award winning documentary “O.J.: Made in America,” has led to record viewership as well as multiple honors and critical acclaim. Additional projects from ESPN Films over the years have included 30 for 30 Shorts, Nine for IX and the SEC Storied series.

When he looks back on his childhood, it’s like talking about someone else’s story. When you’re growing up in the hood, you don’t have time to feel sorry for yourself. You got to keep moving.  Chicago was rough. His father and mother recall how poor they were. It was a pretty heavy time for them. Dwayne’s father and his mother broke up and got back together had Wade and broke up and she got caught up in her own foolishness.

Dwayne watched his mother shoot up and she didn’t compute it that she was shooting up right in front of her son.  Dwayne would get up with his grandmother while his mother was out in the streets. He watch her in pain and slowly kill herself. It was hard for him to understand. He found a way to deal with it. Bring it on… because there was nothing more painful than to watch someone he loved deal with her pain.  A lot of their clothes came from people leaving their clothes in the dryer. They used to sell drugs right across the street from where he and his sister lived. Their mother would open the doors to the house to the drug dealers.

The police would raid the place 2 – 3 times a year and when that happened, he and his sister would run upstairs and to hide with their grandmother’s. He would never forget the trauma of that experience. Wade’s sister felt that Wade didn’t need this. She took her brother to their father’s house.  They left and never went back. He had fun with his brother’s where his mother had his sisters. He started his own rap group called Real Fresh. He was like, 12 years old, Dwayne recounts this and raps one of the first verses to their first song while he was with his sister and father in 2010. His father made a basketball court in the front of the garage. His dad played with him and his friends making them grown-ass men. Went to crying, to fear, and became everything before it was his everything.

He loved being on the court and he started getting better and better and better and the potential grew.  He was more a defensive finesse player, his father recounts but then said, give him a couple years, he’ll get stronger.  All the papers started writing about him, he was getting known. He proceeded to score 90 pts in two games with his high school team. It was there he met, Soivaughan. His father’s drinking problem and his step mom’s arguments took a toll on the kids. He needed calm, and he left his father’s house at 16 years old and lived with his girlfriend’s family to be able to grow and focus.

He earned a scholarship at Marquette University.  He entered his freshman year in 2000. His first year he couldn’t pass his ACT but with hard work, he was able take a year and learn to become a the player and participate.  Then his girlfriend got pregnant. He cried on his coaches shoulder’s and he needed someone to tell him, it’s going to be alright and that was the best time of his life, Zaire was born. A son. Life was still struggles… Zaire followed in his father’s footsteps, playing basketball. Zaire Wade became Young Flash (his father’s name), his father wanted to give him his own name.

This is a phenomenal story and with Marquette never having a player like Dwayne, his fan-base grew and it was fun. He’s building a name for himself and his mom finally turns her life around. He recounts how his mother was getting out of jail and everyone was begging her probation officer to let her see her son play basketball.  She released her and she said all those people, t-shirts, signs, etc… She saw her baby’s name on those signs. His mother was at the championship game for Marquette. She was so proud. What an incredible life D.WADE had. Totally unexpected…

Now, is he ready to lead his own life.  The NBA Draft. The family goes to draft in 2003 to NY City and the number 5 pick for the Miami Heat is… Dwayne Wade!  They’re rich! He can take care of his family but didn’t know what he was getting into so, he just went with the flow, man.  Meet the man of the Miami Heat, Dwayne Wade all thirteen goddamn cavities and all…having never been to the dentist. This is a happy story. This is a story of inspiration and about a man.  It was the start of greatness. The start of responsibility and the trade was made to bring Shaq to the heat. Now, the relationship of the mentor and student begins!

Watching this film helps to make me realize how important life is with family and that me being a father to my son and a grandfather to my grandson is the most important thing in my life. Watching D.WADE making it through all his problems with his divorce, custody battles, who needs that. Just be a great parent and a great spouse. Nothing else matters! When I did the Dennis Rodman review and see the difference between these two men, is remarkable. Not to say that Dennis isn’t a good father, but Dwayne showed a complete difference. This is a story is a human story. A story about a man and his family and how he fought through his childhood to become the great man he truly is: The FLASH!