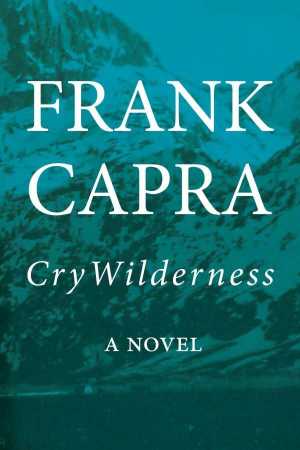 “Maybe there really wasn’t an America, it was only Frank Capra.” John Cassavetes

Los Angeles, CA (The Hollywood Times) February 13, 2019 – Before October 2018 Frank Capra’s Cry Wilderness had never been published. The novel written in 1966 by the legendary film director and his family is glad they came across some undiscovered works. Capra known for films like, You Can’t Take It with You, Lady for a Day, Mr. Smith Goes to Washington, and It’s a Wonderful Life) is an American icon and that word is used so easily but with him? It’s befitting.

Ron Howard writes a glowing forward in the book: “Cry Wilderness is a classic Capra tale we can all fall in love with and indicates in sharp relief that well past the suppose ‘peak’ of his professional directing career, Frank Capra was creating characters and scenes that were quintessentially his own. Once again Capra has brought pages to life with his undiminished and unparalleled humor involving an abundance of great characters and, in an ironic twist, includes himself. Cry Wilderness is genuine, intriguing, and wonderfully Capra-esque. Read it and enjoy! It is my sincere hope that you’ll be inspired by Frank Capra the same way I was.”

Released some 50 years after Capra’s never published novel about his favorite hideway – Silver Lake, nestled in the eastern Sierra Nevada’s was discovered Capra starts with:

“If you, too, feel like wandering, come along and help me unravel this odd tale―a tale full of half-truths, whole-truths, and no-truths at all.”

The story centers around his vacation home that he retreats to with his wife to go fishing in a very small town with smaller minds yet rich with schemes to get rich and get rid of the two local derelicts, Dry Rot and Bear Bait. They live off the land and don’t bother anyone. The locals are charitable, until a local deputy Sheriff is fired for leaving a dead deer behind (with Capra’s assistance) for the two vagrants they’ve come to like and in some ways, admire.

I love Frank Capra’s films and although his usual stand up for the little guy is one of his most redeeming and effective tools as a beloved director, in Cry Wildnerness Capra loses site of his story by taking us on long journeys to envision the scenery and wax poetic or politic on his vision of how the locals should play their roles as opposed to allowing them to be true to themselves.

The dialogue is dated and as are many of the thought processes. Capra is the narrator of the – is it truth or fiction? Both or neither he and seems to relish his time off from his Hollywood career when it was in stall mode – most unfortunate for us who love his movies. The lessons again are of Hollywood and the difference between the show and the biz or as one of my favorite movies constantly reminds us of, wag the dog. What you think is happening may or may not be as it appears…

With all the John Muir and Mark Twain quotes on top of the landscapes illustrations taking so long, the book is a good read for what it is. A book written by a man who was a brilliant film director and knew how to get to our hearts and our souls. In Cry Wilderness, he’s trying to find his way to do the same and succeeds to a degree but more importantly, I believe he shows us who he is as a man and human being. That experience alone, is worth reading the book.