Birmingham, AL (The Hollywood Times) 08/21/2018 – Admit it, you’ve always secretly desired a t-shirt depicting the Golden Girls as members of the Misfits with the slogan, “Thank You For Being A Fiend,” or maybe the Village People shown in the style of Kiss’ 1976 album, “Rock and Roll Over.” Thanks to Brooklyn, NY natives, Joey James Hernandez and Dagna Natoli, that desire can be shipped within 7-10 business days. Welcome to UnMetal. 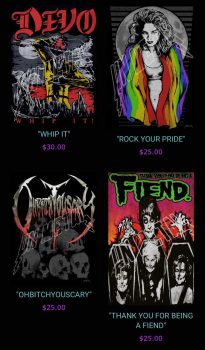 The idea began in August of 2013, following a joke regarding a design for a Marc Anthony t-shirt designed as a heavy metal album cover of sorts, and snowballed into an enterprise not only on the basis of blending genre designs such as Iron Maiden with Rick James, but also providing exclusive artwork for bands like Type O Negative, Sevendust and Stone Sour.

For co-creator, Dagna Natoli, her passion for music is a driving force in what makes UnMetal particularly special for her. Having a substantial background in business, along with a pragmatic approach when it comes to getting the UnMetal brand out in the open are key for success. Mingling with her favorite bands and musicians are just one of many perks. 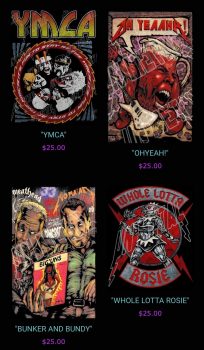 Natoli says,“Networking with people that I’ve idolized over the years through their music, and to see them sporting our original designs onstage in front of 10,000 or more people is beyond anything in our wildest dreams!”

Rockers such as Corey Taylor of Slipknot, Doc Coyle of Bad Wolves, and actress, Jessica Pimentel of Orange Is The New Black, have been spotted wearing official UnMetal designs, and bountifully smiling from ear to ear, which is a clear indicator of customer satisfaction of the highest caliber. In 2015, it was decided that UnMetal should be made available to the general public, via Facebook and Instagram, and also through an official webstore. Since then, UnMetal has amassed an impressive fanbase of musicians and fans alike, and only continues to thrive.

According to Natoli, it doesn’t get any better than connecting with people all over the world by providing humor through the medium of heavy metal. And quite honestly, there’s absolutely nothing more hysterical than something as tame as Hall & Oates’ “Maneater” fashioned as a Metallica album cover. 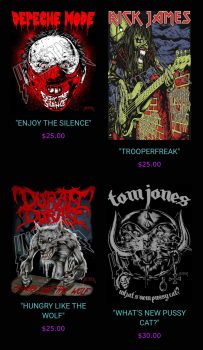 The official UnMetal merchandise website is a true one-stop shop for all of your twisted (pun intended) desires in rock and roll/pop culture crossover attire. Everything from T-shirts and hoodies, to coffee mugs and phone cases are available for purchase.