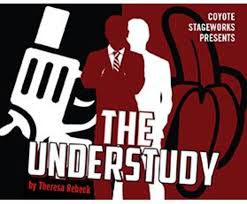 Palm Springs, CA (The Hollywood Times) 11/10/18 – “If there is one major takeaway from the play, it is that life will always throw you obstacles and what matters most is not your circumstances but how you navigate them,” – said actor/cast member Alex Best.

This is a play about a play, actors playing actors, based off the work of Franz Kafka. The cast strategically takes you through a wide range of emotions. The Comedic performance starts off simple, an empty stage with just a ghost light.

Harry, (played by David Youse,) is a working actor without a ton of opportunities. He works his way up to become the understudy’s understudy. He had some tricks up his sleeve to get that part—it turns out it’s all about who you know.

Jake, Played by Alex Best, is a newly minted action movie star is waiting to hear back from Paramount to take on a new role that will bring him out of action movies and into more serious roles. Until Jakes big breakthrough, he is playing opposite the even bigger movie star, Bruce, while also standing-by for him in case Bruce can’t go on.

Roxanne, played by Robin McAlpine, sets the stage as an actress who couldn’t make it big.  So in order to stay in the scene, and most importantly pay the bills, takes on the role of stage manager.

A once-void stage slowly takes on a comedic presence and the stage starts to bloom. Your typical rivalry amongst actors is nothing new, but a constant reality.

Roxanne keeps the audience on their toes when a twist regarding Harry and her prior wedding engagement fails to materialize. It’s refreshing to see both sides of what happens when a partner goes silent after calling it quits. The show explores the effect it has on both parties.

Going into an interview and being told he was perfect for the role, Jakes dreams quickly get torn away.

Certain opportunities arise, leaving all three powerless with no say over what happens to them.   As the show comes to a close and they find themselves out of work, they’re forced to also come to grips with that reality.

They portray reconciling, despite their best efforts. It doesn’t always go the way one wants, but the capacity of perseverance keeps them going despite life’s challenges.

“Are we still going to dance?” says harry. A bittersweet ending as Kafka intended.  The hilarious trio dances in the falling snow around them, finishing what they started.

The Understudy plays through November 11th at the Annenberg Theater at the Palm Springs Art Museum.  101 Museum Drive. By Theresa Rebeck – Produced & directed by Chuck Yates

Visit www.coyotestageworks.org for more information about the company and their performances.