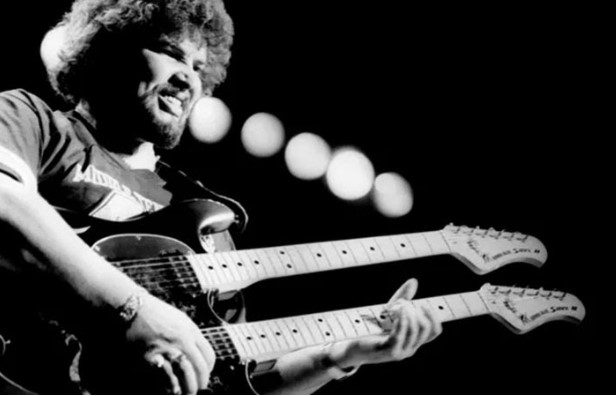 NASHVILLE, Tenn. – Country Music Hall of Fame member and co-founder of Alabama, Jeff Cook passed away Monday. He was 73.

A spokesperson for the group confirmed the news to The Tennessean, saying the guitarist died at his home in Destin, Florida.

Over the past ten years, Cook had suffered from Parkinson’s disease, a disorder of the nervous system that primarily affects a person’s movement.

With Alabama, Cook rose to prominence in the late ’70s and ’80s with a string of hits that include “Tennessee River,” “Dixieland Delight,” “Song Of The South,” “Mountain Music,” “Feels So Right” and more. The group amassed more than 41 No. 1 singles and 12 top 10 albums and is credited with selling more than 75 million records worldwide. With more than 200 awards from a variety of organizations, Alabama earned a slate of trophies that include three consecutive CMA Awards for Entertainer of the Year (1982-1984) and five ACM Awards for Entertainer of the Year (1982-1986). In 1989, Alabama was named Artist of the Decade by the ACM. In addition to his performance work, Cook founded Cook Sound Studios, Inc. in Fort Payne and established WQRX-AM in Valley Head, AL before selling the station. He was inducted into the Musicians Hall of Fame in 2019, and Alabama is a 2005 inductee to the Country Music Hall of Fame.

Arrangements for Cook’s celebration of life will be announced at a later date. In lieu of flowers, the family has requested donations be made to The Jeff And Lisa Cook Foundation (P.O. Box 680067, Fort Payne, AL 35968) or at the foundation website, thejeffandlisacookfoundation.org.

Fellow artists and friends mourn the loss of their friend and share memories of Jeff Cook:

“Jeff Cook was a long-time friend and brother as has been Randy and Teddy over all these times passing! This is a heartbreaking loss for all that knew Jeff. ALABAMA is in our prayers. Rest in Peace Jeff. Until the day…” – Joe Bonsall, Duane Allen, William Lee Golden, and Richard Sterban / The Oak Ridge Boys

“I have great memories of touring with Alabama for 2 years, a most important time in my career. Jeff’s talent and his life of being a great entertainer will never be forgotten.” – Janie Fricke

“We ran a lot of roads together back in the ’80s. I was proud to tour with Alabama for four years! Night after night I watched them create magic like I had never seen before. Jeff was a unique part of the group Alabama and a really good guitar player and fiddle player. We thought we were forever young. This one hits hard. Go rest high on that mountain, Jeff Cook.” – Lee Greenwood

“I’m so sorry and sad to hear the news of Jeff Cook’s passing. He was not only a delight to see and hear on stage, but was always a delight to just hang with. He definitely has left his mark in country music that will never be erased. R.I.P. my friend” – T.G. Sheppard

“So sorry to hear that Jeff has passed. He and Lisa always got Sheila and me to stay with them at “The Castle” and they were the most gracious hosts. He always had me laughing. Jeff contributed so very much to the music world. Alabama was the greatest country band in history and showed us all how to get it done. Condolences to Lisa, Randy, Teddy, and his legion of fans. Rest in peace, my brother.” – T. Graham Brown

“I was good friends with Jeff Cook and will miss him a lot. Praying for his family and friends. Rest easy, buddy.” – Johnny Lee

“In 1980 I heard my first Alabama song on the radio. I immediately fell in love with the harmonies, blazing guitar solos, and honest lyrics about being a country boy and growing up in the South. I was saddened to hear of the passing of Jeff Cook today. He told us that no matter what we do or how we play it needs to ‘come from the heart.’ Rest in Peace, Sir!” – Heath Wright of Ricochet

“Frizzell and West & Alabama worked a lot of shows together in the early ’80s. It was great working with these talented guys. So sorry to hear of Jeff Cook’s passing.” – David Frizzell

“The last time I played with Jeff Cook was on the 2020 Country Music Cruise. Alabama was one of the headliners that year, and even though Jeff performed several shows throughout the week with Randy and Teddy, he spent most of his nights with me and my dueling piano partner Chrissy Sparks. He sat around our pianos and helped us sing. He and I even played a few numbers together at the pianos. Twenty-seven #1 hits of his own, and Jeff was happy singing the classics. He simply loved the music! My condolences to his family and friends.” – Tim Atwood

“The group Alabama was one of my all-time favorites growing up! Was fortunate to meet Jeff Cook and the boys on a couple of different occasions. One of the best guitar pickers ever also! RIP to another legend! It’s a sad day.” – Shane Owens

“Prayers to the family of Jeff Cook. One of the founding members of Alabama – the highest-selling country band of all time. Their music traces back to my childhood and so many good times growing up! He was a staple of that country group and he helped put Ft. Payne on the map. I know he’s going to be missed tremendously. Prayers also to Randy and Teddy as they continue their legacy in Jeff’s honor.” – JD Shelburne

“I am saddened to hear of the passing of Jeff Cook. I grew up listening to the wonderful songs “Alabama” released and I still play them to this day. His playing will live on in this world and he will be dearly missed.” – Makenzie Phipps

“Jeff has played such a big part in music history for years and has a legacy that will live on for centuries, I’m sure! My thoughts & prayers are with his family & friends during this hard time.” – Paige King Johnson

“Saddened to hear about the passing of Jeff Cook. I have countless fond memories of my family and me dancing around and listening to his music. Sending my love and prayers to his family during this time. The legend of Jeff lives on in all of our hearts.” – Whitney Miller