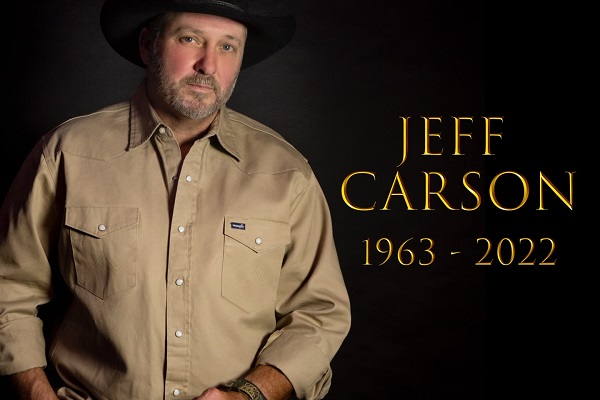 NASHVILLE, Tenn. – Country music hitmaker and Academy of Country Music award-winner Jeff Carson died of a heart attack at Williamson Medical Center in Franklin, Tennessee at the age of 58.

Carson was born in Tulsa, Oklahoma, and began his musical career early on singing in church. He recorded demos, including Tracy Byrd (“Walkin’ To Jerusalem”), Tracy Lawrence (“I See it Now”), Reba McEntire (“The Heart Is A Lonely Hunter”), Tim McGraw (“I Wouldn’t Want It Any Other Way”), Faith Hill (“It Matters To Me”), Mark Wills (“Places I’ve Never Been”), Diamond Rio (“Mirror Mirror”) among others. “Yeah Buddy,” was his first charting single and was followed up with ‘Not On Your Love,’ which went number one. The following single, ‘The Car,’ became a top-five hit, topping out at number two and won Carson his first Academy of Country Music award for “Video of the Year.” Carson had several other singles, including “Real Life (Was Never The Same Again)” from his album “Real Life.” In total, Carson’s career achieved 14 charted singles on the Billboard chart. Carson took a break from music to become a law enforcement officer with Franklin Police Department in Williamson County, Tennessee, where he remained on the police force.

Returning to music in 2019, he signed with Encore Music Group and has been in the studio with Buddy Hyatt recording a specialty album to be released later this year that included duets with Michael Ray, Darryl Worley, Mark Wills, and Craig Morgan. Jeff Carson is survived by his wife Kim Cooper Carson, son Dayton Grei Herndon Carson, mother Virginia Norton, brother Steve Herndon, sister Karen Spurlock, as well as aunts, uncles, nieces, and nephews.

Fellow artists and friends mourn the loss of their friend and share memories of a true mentor, Jeff Carson:

The Oak Ridge Boys are saddened by the loss of Jeff Carson. Yes, he had a bunch of charted singles but his heart belonged to the Franklin TN Police department where he served as a law enforcement officer since 2009. We didn’t know Jeff well but certainly admired him. Rest In Peace!” – Joe Bonsall / The Oak Ridge Boys

“I’ve tried being ok and thinking you’re in a better place but this doesn’t seem real! I hope you know getting to sing “The Car” with you will always be one of my most cherished moments. I love you, man. Watch out for us brother we’re gonna need it!” – Michael Ray

“Kim and I are shocked today to hear of the passing of Jeff Carson. What an awesome man and patriot! I will forever be thankful for his participation in my tribute concert a few months ago and was blown away by his talent. We are sending prayers to his family tonight. Jeff, thank you for serving our community of Franklin and for being a wonderful friend to so many including myself. Go rest high on the mountain my friend!” – Lee Greenwood

“I had the chance to work with him some time ago. What a kind man he was to everyone. My prayers go out to his family, friends & fans, and also the men and women in blue that he worked with. Gone but never forgotten.” – T.G. Sheppard

“Sheila and I are so sorry to hear about our friend, Jeff Carson! Gone too soon! He was an awesome musician and several years ago, he joined the Franklin, TN Police Department. To me, he was a hero for doing that! I had gotten to know him better over the last few years. We shared a dressing room (and a lot of laughs) when we did the Lee Greenwood 40 Years of Hits at the Von Braun Center in Huntsville, Alabama last fall. My band and I played the after-party and Jeff got up and sang a few songs. When he was through, he gave me a bear hug and had a big ‘ol’ grin on his face! That’s how I’ll always remember him! Our thoughts and prayers go out to his wife, son, family, brothers/sisters in blue, and fans. Rest in Peace, brother!” – T. Graham and Sheila Brown

“Jeff Carson was a wonderful singer and a true family man. He left his mark on country music and the entire Nashville community. Prayers to his family, friends, and police force during this sad time.” – Johnny Lee

“So saddened to hear of the passing of my friend Jeff Carson. He was a tremendous singer and one of the kindest people I’ve ever met. He also was a law enforcement officer who served his community bravely. He’ll be missed dearly. I’ll see you on the good side buddy.” – Bryan White

“Jeff was a friend. Always made me laugh. Always eager to serve. Once “arrested” me at a restaurant. Another time, he acted like he was buying drugs from me–in front of police officers. Will miss him.” – Stephen Mansfield

“I admire Jeff Carson for not only his music as a Country Music artist, but his dedication to family, and serving his community as a law officer. My love & prayers to his family.” – Rhonda Vincent

“I’m sorry to hear the sad news about Jeff. We all enjoyed working on the Lee Greenwood show, and I know he will be missed by his family and friends. Prayers for all those who knew him.” – Janie Fricke

“Jeff Carson was one of the most gifted singers in Country Music. He could rock you with songs like “Yeah Buddy”, but it was the soulful ballads like “Not On Your Love” where he would truly shine. His talent and love for this music was clear and showed every time he stepped up to the microphone. Later in life, he chose the honorable profession of law enforcement. Both of these vocations showed his big heart. Our condolences go out to his wife, Kim, son Dayton and the rest of his family, as well as the many friends and fans. Rest well.” – Dallas Wayne / SiriusXM Radio

“Shocked and saddened by this news. Rest in peace my friend.” – Terry McBride

“I’m so shocked and sad. My love goes out to his sweet family.” – Jamie O’Neal

“Never got the chance to know him personally, but it’s a terrible loss for the community. My heart goes out to his family and loved ones.” – Ian Flanigan

“Jeff was one of the nicest people I have ever met. He was a very talented man with a true country voice. Blessed to have known him and will cherish the memories we made together.” – Shane Owens

“I am shocked and saddened by the passing of Jeff Carson. I was a big fan of his music growing up and was excited to hear that he was making a comeback to the music scene. I had just recently heard him chat with Billy Cody on WSM Radio and could tell how excited he was to get music out and reconnect with the fans. He told a story about his old guitar that he was playing on the radio that day that made its way back to him from a fan. It was powerful. “The Car” is one of my favorite storytelling songs. He will be missed but his music will live on.” – JD Shelburne

“Jeff Carson left a mark on this world both through his music & his personality. He will truly be missed!” – Paige King Johnson

“I am saddened to hear about the passing of Jeff Carson. He was a man of many great songs and had a voice like no other. I admired his vocal skills and his true, classic country sound. Although he will be missed, his music will live on forever in the world of country music. May he Rest In Peace!” – Makenzie Phipps

“Although I never met Jeff Carson in person, I had an phone interview with him last year and it was a great conversation, as though we were close friends.  I was saddened when I heard of his passing and my prayers go out to his wife, Kim, son Dayton and the rest of his family.  I have included my article about his song/video, which includes our phone conversation.” Judy Shields, The Hollywood Times