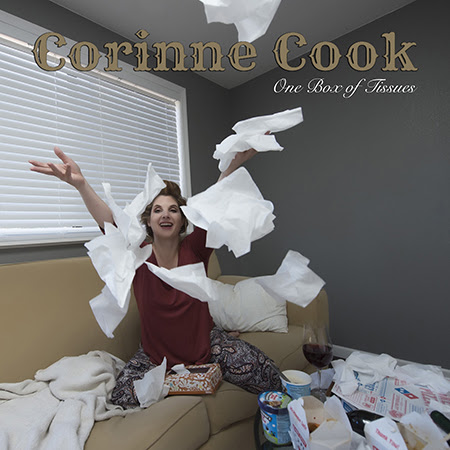 NASHVILLE, TN. – (May 14, 2019) – Emerging Country artist, Corinne Cook, has released a lyric video to support the success of her official video and radio single, “One Box of Tissues,” via YouTube and Facebook online streaming platforms. The lyric video is available for viewing here.

“I am thrilled to have had Corinne Cook record “One Box of Tissues.” When she approached me that she was looking for songs, I thought it would be a great fit for her,” recalls songwriter, Debbie Pascarella. “I was going through, let’s just say an unrequited love, and I made a meme on my Facebook page stating “I’ll give this one box of tissues and I’m done,” and a friend responded this would be a great song! I replied, “I know, I already wrote it,” and I hadn’t. My co-writer Dani Jamerson came into town a few days later and we wrote it.  So proud of the way Corinne took this concept and brought it to life.”

Corinne Cook reflects her thoughts on the song. “I decided to record “One Box of Tissues” because I loved how it transitioned from a seemingly melancholy ballad to an upbeat, light-hearted depiction of the grieving process after a break-up.”

Watch the official video here for “One Box Of Tissues,” which has been added to prominent regional (Video Diversity in Omaha, NE, California Music Channel, and Video Hits in Rochester NY, among others) and multi-market (Rain Music Network and H2O TV out of NY) networks all over the country, as well as top websites and blogs like Music-News.com. It’s also been added to RX Music, an on-demand outlet that services retail, hotel, and nightlife outlets such as Hard Rock Café and Hotel, Bar Louie, Four Seasons hotels, The Cheesecake Factory, TopGolf, and Samsung.

“Here’s an artist that’s impossible not to root for! Corinne Cook’s latest music video ‘One Box Of Tissues’ is an optimistic look at how to get over an untimely, unexpected break-up,” said Andy Gesner, Hip Promo Video “It’s a superbly crafted video with an easily relatable story, so it’s no wonder that music video programmers across the programming spectrum and all over the world have been eager to share this with their viewers!”

About Corinne Cook:
Corinne Cook has enjoyed a handful of accolades for her previous albums. “I Don’t” from her 2015 release Dressed Up For Goodbye which won a Nashville Industry Music Award (NIMA) for Song of the Year in 2016. Her debut album I’m Not Shy included two tracks that reached the Top 5 on the Inside Country chart; #1 hit “Uninvited Guest” and the title track, which reached #4. Cook’s current project, Yes I Can, marks an important breakthrough for Cook as a songwriter of great storytelling skill and depth. Corinne’s music journey became a reality after her return from serving in the military when she won a singing competition in Riverbank, CA. The prize was supposed to be a pro recording contract, but instead the host of the contest, Leon Womack, became her manager who funded a trip to Nashville to record songs that ultimately led to her first album. Reconnecting with her passion for singing and performing, Corinne began singing at festivals in Northern California and worked part time as a radio DJ for the classic country station 93.9 “The Ranch” in Ripon, CA. Fully committing to the dreams that are now coming to fruition, Corinne moved to Nashville, to focus on developing her career as a singer and songwriter.