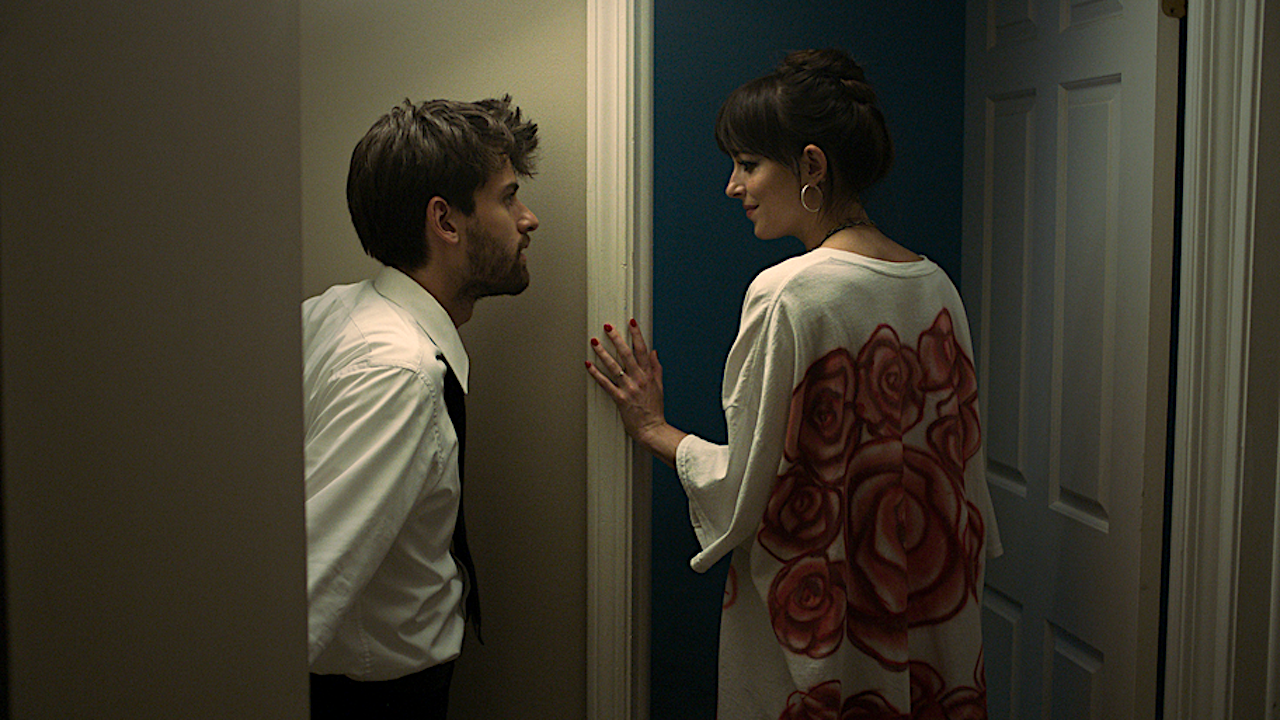 Los Angeles, CA (The Hollywood Times) 2/1/22 – Premiering at Sundance 2022 this past week has been Cooper Raiff’s Cha Cha Real Smooth (USA, 2022), a more confident and funny film than his indie comedy hit Shithouse, which garnered the Grand Jury Prize at SXSW Film Festival 2020. Cha Cha Real Smooth is another story of those often-aimless years after college but one that’s told in a buoyant, easily likable manner. Raiff’s films capture the uncertainty of youth in a way that feels vulnerable and relatable. While it sometimes feels like he’s trying to cram a few too many messages into Cha Cha Real Smooth, it’s incredibly easy to dance along. Fresh out of college – but now what? Higher education failed to provide 22-year-old Andrew with a clear life path going forward, so he’s stuck back at home with his family in New Jersey. But if college did teach him one thing, it’s drinking and partying – skills that make him the perfect candidate for a job party-starting at the bar and bat mitzvahs of his younger brother’s classmates. When Andrew befriends a local mom, Domino, and her daughter, Lola, he finally discovers a future he wants, even if it might not be his own.

Cha Cha Real Smooth stars Raiff himself as an aimless college grad who finds more satisfaction in making older women smile than he does in making anything of himself. He finds a perfect vessel for his predilection in the form of a beautiful 29-year-old mom named Domino (Dakota Johnson) with an autistic 12-year-old daughter Lola (newcomer Vanessa Burghardt), both of whom could use a measure of the warmth and grace Raiff’s character is so eager to provide.

Early in Cooper Raiff’s Cha Cha Real Smooth, Andrew (Raiff) walks around the bar mitzvah of one of his little brother David’s (Evan Assante) classmates, convincing guests to get on the dance floor. At one point, he approaches an autistic girl, Lola (Vanessa Burghardt), whose mother, Domino (Dakota Johnson), assures him that she won’t dance, offering him $300 if he manages to persuade her. Within a minute, the impossibly charming Andrew has gotten Lola up out of her chair and the girl has the time of her life.

Andrew truly believes in his ability to charm the pants off of everyone and his need to have us fall for his recent college grad’s charisma. Andrew is, in fact, so successful as the unprompted, self-professed life of the party that he’s even recruited by several mothers to work as a “party starter” at upcoming bar and bat mitzvahs. Aside from giving Andrew a platform to flaunt his alluring personality, this allows him the chance to further bond with Domino and Lola, who also frequently attend these ceremonies.

Andrew’s life isn’t exactly perfect: While his girlfriend is studying in Barcelona on a Fulbright scholarship, he’s working a dead-end job at a mall restaurant and living at home with his warmhearted mother (Leslie Mann) and dull, crabby step-dad (Brad Garrett), who Andrew thinks isn’t good enough for her. But rather than take a page from Whit Stillman’s The Last Days of Disco or Terry Zwigoff’s Ghost and thoughtfully reflect on post-collegiate ennui and disillusionment, Raiff instead erects a monument to Andrew’s awesomeness. Perhaps this is the danger of writing, directing and starring in one’s own film.

Throughout Cha Cha Real Smooth, Raiff doesn’t subject Andrew’s neediness and weird insistence on sticking his nose into other people’s business to much scrutiny. And since Domino and his mother’s partners are presented as mostly lifeless beings ­­– as well as inattentive in the case of Domino’s fiancé, Joseph (Raúl Castillo) – Andrew’s intrusions are presented as, if not exactly necessary, then more than a little gallant.

Especially when it comes to Domino, Andrew’s unbelievably profound kindness, such as the way that he endears himself to Lola and repeatedly plays the white knight for her and her mother, feels less like a natural extension of the character than a self-conscious put-on on Raiff’s part. At one point, when Domino tells Andrew, “You look like the sweetest person ever,” it’s clear that we’re all supposed to be nodding along in agreement.

The struggles of these characters are ultimately explored only as a means to prop up Andrew’s seemingly boundless altruism, solidifying his role as a healer and compassionate listener. Cha Cha Real Smooth may not provide the proverbial happy ending with regard to Andrew and Domino, but even in the film’s final moments, it’s difficult to shake how a certain revelation about Domino and Joseph’s relationship is revealed so as to maximize emotional impact.

In an interview, Raiff explained some of his influences: “The Duplass Brothers, for sure. I’m close with Jay, who helped me make Shithouse. Growing up, they were the guys; I watched all their movies and fell deeply in love with everything they were doing. I just watched Jay’s pilot, Somebody Somewhere for HBO.”

Cha Cha Real Smooth was a crowd pleaser at Sundance. Apple just paid $15 million for the pleasure of sharing it with Ted Lasso fans. So, it will be available online with Apple at some unspecified date this spring.