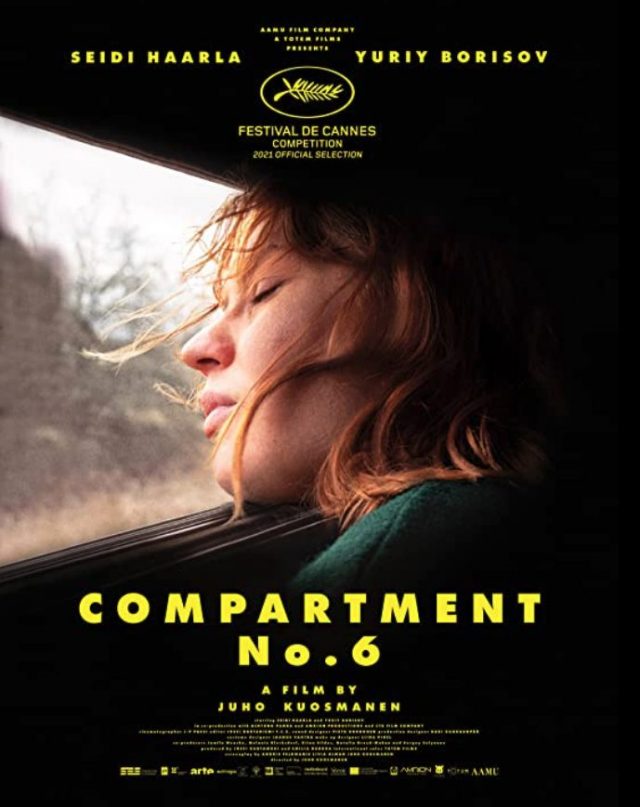 Los Angeles, CA (The Hollywood Times) 11/22/21 – Another film that was included in the lineup for the 2021 AFI Film Festival and currently screening at the Laemmle Theatres is Juho Kuosmanen’s Compartment No. 6 (Finland, 2021), a film in Russian & Finland, with English subtitles. An offbeat romantic story of strangers on a train, Compartment No. 6 takes place mainly on a train from Moscow to Murmansk in Russia’s remote northwest near the White Sea and the Arctic. This new film is adapted from a novel of the same name by Finnish artist and author Rosa Liksom, and concerns a young Finnish student of archaeology, Laura (Seidi Haarla) who is in Moscow sometime in the early 1990s. Laura has begun an impulsive affair with her professor, Irina (Dirana Drukarova). Under Irina’s tutelage, with her encouragement, and perhaps because this older woman does not care to have Laura hanging around much longer, Laura has resolved to make the tough rail journey up to Murmansk where she wants to view the ancient petroglyphs there. These petroglyphs which date back to at least 4,000 BC are mysterious rock drawings that were only discovered in the 1990s. Compartment No.6 is Finland’s submission for Best International Feature Film for the 94th Academic Awards in 2022.

I have a personal fondness for road movies, especially ones on trains in remote places – having traveled many times on Russian trains in the former Soviet Union and through Russia afterward. Travel through remote parts of Russia by train is an unforgettable experience and I found this film a marvelous reminder of some of my own experiences on Russian trains. Kuosmanen, and his genius “Olli Maki” production design collaborator Kari Kankaanpää pull off the feat of re-creating the retro-by-western-standards milieu of late-’90s Russia so completely that at times you might swear you can smell the images, and feel the cold drafts rattle in through the decrepit carriage doors.

Between Moscow and Murmansk, Laura (Seidi Haarla), a Finnish archaeology student at the dwindling end of a love affair with worldly Muscovite Irina (Dinara Drukarova), must share her second-class bunk compartment with tough-looking Russian guy Ljoha (Yuriy Borisov, who also appears in Kirill Serebrennikov’s Competition film Petrov’s Flu). First impressions aren’t great: Ljoha, taut and glowering as an energy coil, scatters sparks from his cigarette across the cluttered table and alternates swigs of generic vodka with bites of a sausage the color of a blocked artery. Ljoha is a boorish, drunk young guy who is on his way to get a job in a coal mine in Murmansk and is openly abusive, misogynistic, and philistine about Laura’s plans. And her phone calls back to Moscow reveal that Irina isn’t exactly pining for her.

Of course, the relationship between Ljoha and Laura is going to eventually thaw. The romance that flowers between these two young people is in parallel with the romance of a long rail journey. It will remind some of the plot of Richard Linklater’s Before Sunrise (1996). A journey composed less of long deep conversations with attractive Interrailers and more of unwashed hair and the awkwardness of bulky backpacks in narrow corridors, and of the dawning realization that hey-ho, no matter where you go, there you are – that was the stuff of travel in Russia in the 1990s when this story is placed. We see Laura trying to capture elements of her experience on her very 90s Camcorder.

Ljoha’s scowling face and shaven, bullet head make him look a tough guy at first, but it isn’t long before we see him as a vulnerable little boy, never more so than when with Laura welcomes another Finnish guy to share their carriage – a self-admiringly sensitive type who insists on singing and playing his guitar. Ljoha is fiercely skeptical and resentful of this preening interloper, and he is right to be. Laura is on a quixotic mission to see some rare petroglyphs (rock paintings) in the Murmansk region and spends much of the first leg of her journey trying unsuccessfully to get away from Ljoha. But that changes during one overnight stopover in a snow-covered Russian town when Laura agrees to visit his babushka during an overnight stop. After that and not because of any particular revelation, they wake up as friends.   Laura reluctantly opens herself to the sobered-up Ljoha’s overtures of friendship,

In loosely adapting Rosa Liksom’s novel of the same name, Kuosmanen changed the era from the end of Soviet Russia to a decade later (given away more by a slightly incongruous reference to Titanic than by the film’s fab soundtrack, in which Desireless’ Euro-banger “Voyage Voyage” becomes the perfect recurring refrain.) But the sense of period is less about a particular year than a particular phase, and with this shift, Kuosmanen has cleverly substituted one period of the late 20th century in time for another. This may be the last gap of analog technology with the Camcorder before the digital revolution put a cellphone in every pocket. In the 1990s, one could still be truly alone and experience a special kind of loneliness and see love as its cure

As for the actual petroglyphs near Murmansk in northeastern Russia, scientists have not yet been able to ascertain why the prehistoric inhabitants of the North made these rock carvings. Earlier they thought they were a depiction of scenes from everyday life. However, recently another theory has been gaining currency: that the petroglyphs had a spiritual character. “The carvings may depict the rituals of prehistoric people,” says Likhachev. “The locations where there are many engravings may have been ancient open-air shrines.” The petroglyphs may have been used to communicate with the spirits of ancestors or in healing rituals. Archeologists are now collecting data to try and recreate what may have been an ancient religious system. Currently, the Russian government is building a wood and glass shelter over them and there are pricey helicopter tours to visit them. They do remain almost impossible to visit in the winter – although, in Compartment No. 6, that is what Laura wants to do.