Los Angeles, CA (The Hollywood Times) 12/12/21 – Semih Kaplanoğlu is one of Turkey’s most interesting filmmakers today. His most recent film Commitment Hasan (Baglilik Hasan, 2021) premiered at the 2021 Canned Film Festival and has been selected at the Turkish entry for Best International Feature Film for the 94th Academy Awards. It is the story of an ordinary man who makes his living from his father’s fruit garden and is forced to deal with the power company that wants to put an electricity tower in the middle of his land. Many of Kaplanoğlu’s films are what I call “quiet films” which captures pastoral life in Turkey with natural sounds and no intrusive musical score. Commitment Hasan is the second film of his Commitment trilogy – a series that shows Kaplanoğlu’s ethical sensibilities and pronounced interest in family dynamics played out on a rural canvas. What is especially interesting in this slow-burning morality tale is how Kaplanoğlu explores the mindsets of people in predominantly Muslim Turkish society to better understand the daily lives of a husband and wife as they reflect on their past in preparation for a pilgrimage to Mecca.

In the early moments of Commitment Hasan, one could mistake the titular character Hasan for a weak, vulnerable individual others routinely walk all over. Portrayed with a quiet sense of stealth by Umut Karadag, Hasan is a fairly prosperous farmer and gardener tending to the family land he inherited from his father, a windswept, fecund place of tomato fields and apple orchards. In the opening sequence, he puts up a silent and losing fight against an arrogant engineer who drops by his plot unannounced and informs Hasan that an electrical pylon would soon be erected right in the middle of his field as part of the government’s plan to enhance the region’s power grid. Hasan sheepishly protests: Why wouldn’t they reroute the expansion and choose the vacant neighboring field instead? Predictably, his objections fall on deaf ears. 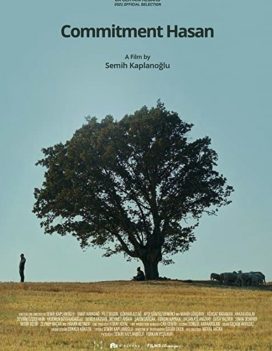 Soon though, Kaplanoğlu’s drawn-out script crawls through different shades of Hasan, revealing a slyly conniving, often unfair manipulator gifted at safeguarding his interests at the expense of others. This is someone who knows his way around the taxing Kafkaesque bureaucracy he has to face. Not only has he been there before, but he’s also put others through the wringer in similar fashions, cheaply cutting corners for unjust personal advantage and to make a few thousand Turkish lira.

Özgür Eken’s lush cinematography of pastoral textures allows us to dwell in the rural spaces at a lethargic pace. Kaplanoğlu builds these complex facets of Hasan’s world in subtle detail, forming an indistinct prototype of the predominantly Muslim Turkish society where greed and self-centered pursuits are habitually at odds with the teachings of Islamic faith. In that regard, Hasan quickly finds that the pylon that would compromise the fertility of his soil is no big burden compared to the ethical threat his upcoming pilgrimage to Mecca would pose on his conscience. When he and his equally calculating wife Emine (Filiz Bozok) get an out-of-the-blue approval for the hajj, a mandatory religious duty in Islam, the couple obligatorily examine their troubling past acts, just so they can make amends in due course and embark on their spiritual journey with a clean slate.

On one hand, Commitment Hasan closely resembles a Nuri Bilge Ceylan movie (Once Upon a Time in Anatolia) through its patient cinematography and graceful visuals that allow both the nature and the people that inhabit it ample space to move at their own speed – dewy bushes, carefree wildlife, expansive prairies and so on. On the other hand, it did not delve deeply into the human psyche in a way that Ceylan’s cinema effortlessly possesses. Karadag and Bozok. especially deliver a pair of layered performances as a married duo perfectly matched in their self-centered worldview, with the film’s strongest scenes underscoring the pair’s deceitful nature. In one of them – the movie’s most memorable thanks to Bozok’s crafty interpretation of Emine’s nonchalant greed – Emine tries to stiff a local needlewoman she’s ordered a custom piece from. In another, Hasan contemptibly attempts to seize a neighbor’s foreclosed land far under value. Consequently, Kaplanoğlu unearths some dark humor in the scenes that follow as the couple practice the ins and outs of their upcoming pilgrimage in a communal class and go on a performative goodwill spree, not because of genuine remorse but due to the demands of Islamic customs.

It is not until the very end of the two-and-half-long film that we finally discover the full story about the land that Hasan has inherited along with his estranged brother. Without being a spoiler alert, it is significant that in seeking to clear his conscience of past misdeeds, Hasan finally goes to visit his brother – only to discover that his brother no longer recognizes him. Forgiveness is not always possible. Personal and religious virtue are not necessarily rewarded.