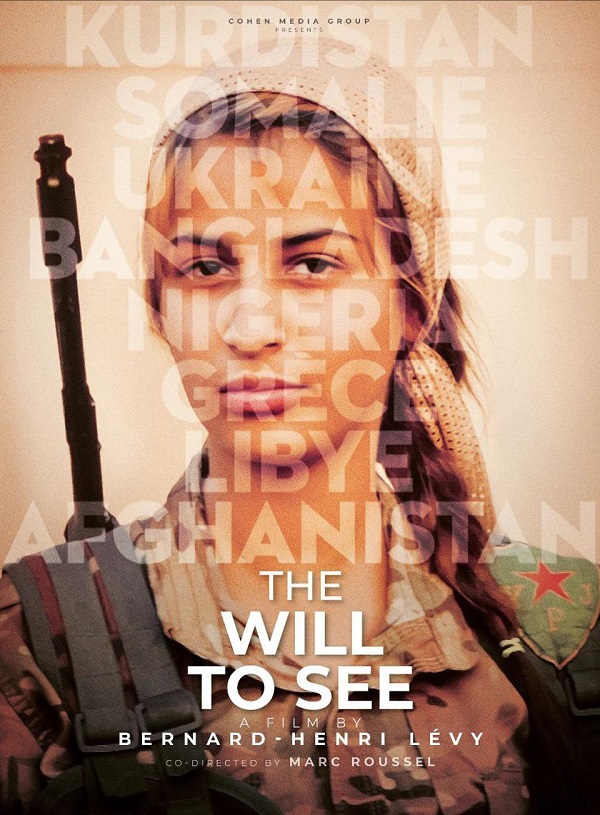 “But first, go on the ground.”–Bernard-Henri Lévy, THE WILL TO SEE.

Famed French director Bernard-Henri Lévy (aka BHL) has created and narrated a new 94-minute documentary called THE WILL TO SEE that takes an in-depth look at today’s global hotspots of conflict and the resultant humanitarian crises.  Lévy just returned from war-torn Ukraine after meeting with many civilians, military personnel, and public officials including Mayor Vitali Klitschko of Kyiv and former President Petro Poroshenko.

THE WILL TO SEE will be released in Los Angeles on Friday, April 29th, 2022 at the Landmark Westwood Theater.  Lévy will appear in person on Saturday, April 30th for a q & a following the 7 p.m. screening.  The film, which was co-directed by Marc Roussel and produced by Kristina Larsen, will also be released in Boston, New York, San Francisco, and Washington, DC  on the 29th.

The 73-year-old Lévy, who is regarded as one of the world’s most daring political reporters, was fighting for justice on the front lines while most of us were locked down under quarantine.  In 2020 he was sent by a group of newspapers (THE WALL STREET JOURNAL, LA REPUBLICA, and PARIS MATCH among others) to document the world’s most urgent geopolitical disasters.  He has one message: pay attention and care for common humanity.

Lévy has authored over 45 books and directed six documentaries on tense international topics taking him to far-flung regions such as Afghanistan, Bangladesh, Bosnia and Herzegovina, Georgia, Greece, Nigeria, Somalia, Libya, Syria, and Iraq.  Three of these films were Official Selections for the Cannes Film Festival.  Lévy is a leading French intellectual who co-founded the “New Philosophers” movement and is known for his opposition to authoritarianism in all of its manifold forms.

While the dreadful events revealed in the film could make one lose hope for humankind, the extraordinary life of its director offers a ray of light.  His eternal vigilance in the face of unthinkable horror offers a way out of the abyss. 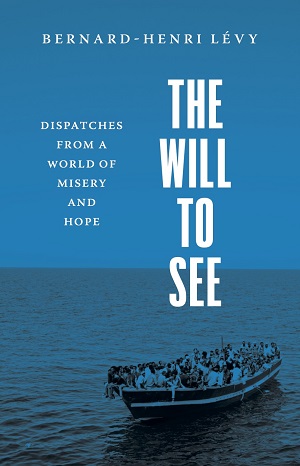 Those interested in the film might also like to read the book upon which it is based!  Published by Yale University Press, it is now available on Amazon: The Will to See: Dispatches from a World of Misery and Hope: Levy, Bernard-Henri: 9780300260557: Amazon.com: Books

This reporter was beyond delighted to intersect online with Mr. Lévy for a brief background interview that appears below.

THT: Of the many international crises you have addressed over the years, the breakup of the former Yugoslavia is closest to my heart since I did relief work for Bosnian survivors in the 1990s through Women for Women International.  You drew parallels between the genocide in Yugoslavia and the Holocaust when you called for European and American intervention.  Please expand upon this.

BHL: Gladly. My thesis, one I’ve harped on for 40 years, is that the Holocaust is unique; that it’s a sort of standard of absolute evil. One has a perfect right, even a duty, to invoke it when a tragedy occurs that takes humanity down a comparable path.

That is what I did during the siege of Sarajevo.  That is what President Izetbegović, a Muslim, was doing when he asked me to deliver a message to President Mitterrand in which he compared the residents of his city to those of the Warsaw Ghetto.  And it is that, the specter of the Holocaust, the feeling of a possible return of the worst, that got me started on Bosnia!, which was my first film.

THT: What are your prognostications for the Russian war in Ukraine now being carried out by Vladimir Putin?  Do you have any practical suggestions for those wishing to offer support to citizens of Ukraine?

BHL: We need to keep up the pressure on our leaders.  We must not make Putin a present of our fatigue and lack of concern.  We must pressure our mayors, representatives, and presidents unrelentingly to keep up the flow of humanitarian and military assistance.

I saw this war coming; I predict it in the film.  But no one wanted to hear it.  Now the film is here.  With, in particular, images of Donbas that I believe to be unique. 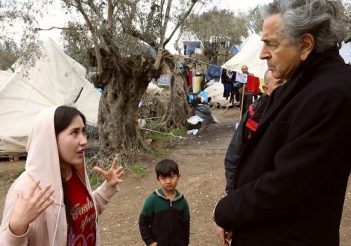 The men and women you see in it, whom Marc Roussel and I filmed, are now seeking shelter from the steel storms of Putin’s cannons.  They are the ones we need to support.

THT: What are your fondest hopes for your new film THE WILL TO SEE?  Do you think American audiences will be able to connect with very intense and complex incidents in faraway countries?

BHL: I hope so.  And national distribution is the best thing that could happen to this film, into which I poured my heart and soul as well as every ounce of my strength.  The conflict is far away but not very complex.

In Washington, I am meeting with senators, representatives, and opinion-makers of all stripes who, believe me, understand right away what I’m talking about and why America’s interests are in the crosshairs.  It doesn’t matter whether they’re Republicans or Democrats.  The film is for them.  They know it.

THT: Do you have any concrete plans for more books or films, or are you waiting to see where the world will take you next?

I’m working on a film about Ukraine, from which I’ve just returned.  World peace hangs in the balance.

THT: What would be your message to the world after witnessing so many senseless and tragic incidents over the years?

Don’t give up hope.  Work tirelessly for peace.