Los Angeles, CA (The Hollywood Times) 2/21/22 – Sunday, February 20 was a screening of restored print of Coming Out Under Fire (USA, 1994), an award-winning documentary film directed by Arthur Dong and based on the book by the same name by historian Allan Bérubé. This important film is a historical account of military policy regarding gays and lesbians during World War II. By focusing on undaunted homosexuals who served as soldiers in World War II, the film provides some context for understanding why in 1993, President Bill Clinton decided to lift the ban on gays in the military and the ongoing national debate. This fascinating documentary is based on the acclaimed 1990 book Coming Out Under Fire: The History of Gay Men and Women in World War II, by Allan Bérubé, who served here as historian and co-writer. Director and co-writer Dong masterfully interweaves the tales of nine courageous men and women, all sharing in detail their personal memories of daily military life.

Coming Out Under Fire screen at the UCLA Hammer Museum (Billy Wilder Theatre) as the second in a month-long retrospective Pioneers of Queer Cinema, co-sponsored by the UCLA Film & Television Archive and Outfest Los Angeles. After the screening of Coming Out Under Fire, director Arthur Dong, who was present, provided his insights into the making of the film in a conversation with Brandan Lucas, the Outfest Legacy Project Manager, who is overseeing the entire series. It is worth noting that Outfest L.A. began more than 40 years ago as a gay film festival at UCLA in 1979 and renamed itself Outfest in 1994. The Outfest UCLA Legacy Project has built the largest publicly accessible and comprehensive collection of LGBTQ moving images in the world.

Coming Out Under Fire features nine gay and lesbian veterans who recount how they joined the patriotic war against fascism in the 1940s only to find themselves fighting two battles: one for their country and another for their right to serve. They first remember warm and entertaining stories of finding each other in a compulsory heterosexual environment and reminisce over tales of first love and deep friendships. Their good times were short-lived, however, as they became targets of newly created anti-homosexual policies which called for witch hunts, dehumanizing interrogations, involuntary psychiatric treatments, and the incarceration of suspected homosexuals into “queer stockades.” The final humiliation was a dishonorable discharge which stripped a soldier of all veterans benefits as well as being officially branded a “sex pervert” for life. 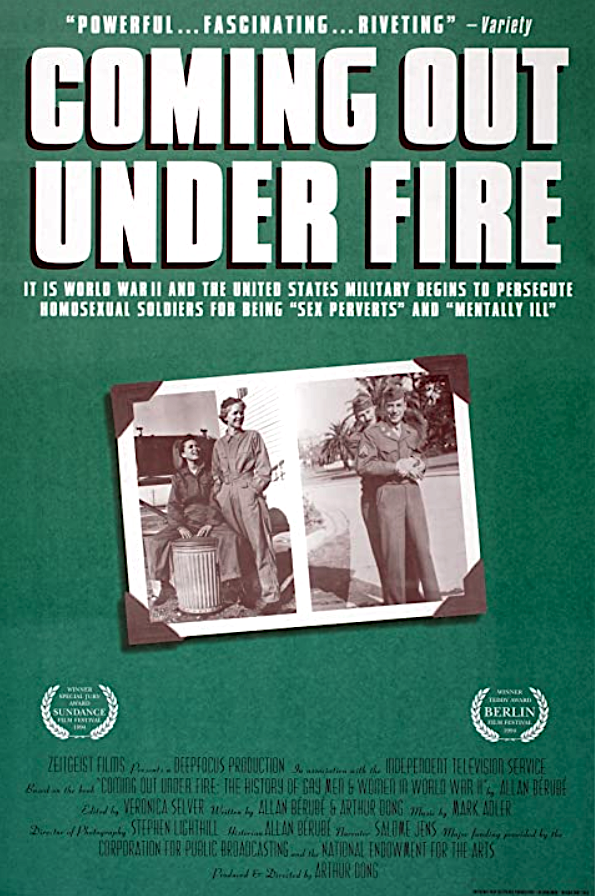 “They made you lie,” says one gay man who served during World War II. “They made you live an invisible life.” Indeed, “don’t ask, don’t tell” became by necessity the motto of patriotic homosexuals. Despite their varied backgrounds, motivations to join the war effort and military careers, the stories are united by the individuals’ strength and willingness to serve the country in the face of oppression and humiliating treatment. The film shows that the military proved most resourceful in its methods, subjecting known gays and lesbians to dehumanizing interrogations, medical examinations, incarceration in “queer stockades” and hospitals for the criminal and mentally insane, and stigmatization as “sex perverts.”

Coming Out Under Fire integrates compelling on-camera interviews with declassified military documents and archival footage on sex education, mental health, prison compounds, and court martial hearings. It probes the origins of the military’s anti-homosexual policy to document how pseudo-psychiatry, erroneous medical theory, and misplaced ethics masked a policy based on nothing short of prejudice.

Though the film’s overall tone is serious and investigative, it also contains compelling personal stories that make it riveting and entertaining. Some talk about how they devised subtle ways to identify other gays and communicate through newsletters that used campy Dorothy Parker lingo; one publication was called Myrtle Bitch; a former WAC fondly recalls her infatuation and first romance with another woman. Being black and gay was a “double whammy,” one member mournfully testifies.

Framing the documentary are dramatic scenes from the 1993 Senate hearings, which expose how the American government continues to perpetuate and reaffirm its ideology – and practice – of discriminating against homosexual soldiers. This contemporary evidence lends greater poignancy to the numerous cases of dishonorable discharge of valiant homosexuals.

Coming Out Under Fire concludes with riveting scenes from 1993 U.S. Senate hearings which expose how the American government continued to justify and reaffirm its 50-year-old system for persecuting homosexual service personnel. After the nationally-televised hearings in 1993, a compromise was reached with Congress deciding on a mandated “Don’t Ask, Don’t Tell” policy. As is well known, this only served to perpetuate the real problem – bigotry and the continued violation of gay and lesbian civil rights. It was not until 2011, that this law was tossed into the dustbin with President Obama signing the bill that repealed “Don’t Ask, Don’t Tell.”

At the Q&A, director Arthur Dong explains how he managed to get major funding for Coming Out Under Fire provided by the Corporation for Public Broadcasting through the Independent Television Service. Additional funding was provided by the National Endowment for the Arts, the Los Angeles Cultural Affairs Department and the Edelman Family Fund. He promoted the film project as an historical film and not as a “gay” film. The archival footage and images for the documentary cost more than $200,000 to access.