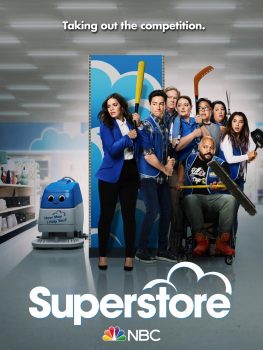 America Ferrera (“Ugly Betty”) and Ben Feldman (“Mad Men,” “A to Z”) star on the hilarious workplace comedy “Superstore,” about a unique family of employees at a super-sized megastore. “Superstore” centers around Amy (Ferrera), the store’s most stalwart employee as well as the glue holding the place together, and Jonah (Feldman), a dreamer determined to prove work doesn’t have to be boring. Their fellow associates include the sardonic Garrett (Colton Dunn, “Key & Peele”), sweet teenager Cheyenne (Nichole Bloom, “Shameless”), and the ambitious Mateo (Nico Santos, “Crazy Rich Asians”), who has recently learned he is undocumented. Overseeing the store is Glenn (Mark McKinney, “The Kids in the Hall”), the store’s affable, clueless store manager, and Dina (Lauren Ash, “Super Fun Night”), the aggressive assistant manager who enforces Cloud 9 policy with an iron fist.

From the bright-eyed newbies and the seen-it-all veterans to the clueless seasonal hires and the in-it-for-life managers, together they tackle the day-to-day grind of rabid bargain hunters, riot-causing sales and nap-worthy training sessions. “Superstore” was created by Justin Spitzer (“The Office”), who serves as an executive producer with director Ruben Fleischer (“Gangster Squad”), David Bernad (“Enlightened”), Gabe Miller & Jonathan Green (“The Office”) and Jackie Clarke (“Marry Me”).

“Superstore” is produced by Universal Television, Spitzer Holding Company and The District. 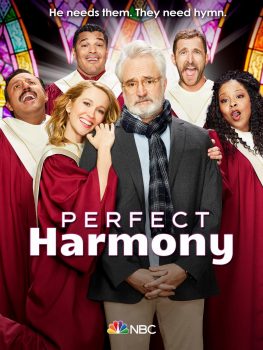 Bradley Whitford stars in this comedy about finding inspiration in the most unlikely places. When former Princeton music professor Arthur Cochran unexpectedly stumbles into choir practice at a small-town church, he finds a group of singers who are out of tune in more ways than one. Despite the ultimate clash of sensibilities, Arthur and his newfound cohorts may just be the perfect mix of individuals to help each other reinvent and rediscover a little happiness, just when they all need it most. 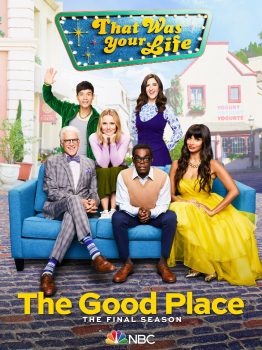 From creator Michael Schur (“Brooklyn Nine-Nine,” “Parks and Recreation” and “Master of None”) comes a unique comedy about what makes a good person. The show follows Eleanor Shellstrop (Kristen Bell, “House of Lies,” “Veronica Mars”), an ordinary woman who enters the afterlife, and thanks to some kind of error, is sent to the Good Place instead of the Bad Place (which is definitely where she belongs). While hiding in plain sight from Good Place Architect Michael (Ted Danson – “Cheers,” “CSI” – in an Emmy Award-nominated performance), she’s determined to shed her old way of living and earn her spot.

The first two seasons featured surprise after surprise and twist after twist, including a world-upending Season 1 finale that threw everything up in the air. At the end of Season 2, Michael appeared in front of the Judge (Maya Rudolph, also Emmy nominated) to argue that the humans may have been judged unfairly and deserve a second chance. With a snap of her fingers, the Judge sent the humans back to Earth, in a new timeline where they never died.

Also seeking redemption, along with Eleanor, are Senegalese philosopher Chidi Anagonye (William Jackson Harper, “Paterson”), who is tortured by decision-making; elegant Pakistani-British socialite Tahani Al-Jamil (Jameela Jamil, “Playing It Straight”); and dance-obsessed Floridian Jason Mendoza (Manny Jacinto, “The Romeo Section”). Michael is aided by Janet (D’Arcy Carden, “Broad City”), a human-esque repository for all of the knowledge in the universe. 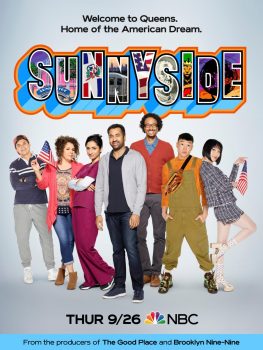 Season Premieres on 09/26/2019 09:30 PM
Garrett Modi was living the American Dream. As the youngest New York City Councilman ever, he was rubbing elbows with the political elite, attending star-studded parties and was the pride of Queens. But instead of spending his time in ofﬁce helping the people that got him elected, he lost his way amidst the power and glamour of politics. When his downward spiral got him busted for public intoxication (and downright stupidity), it was all caught on tape and ended his career. Now, Garrett’s crashing with his sister, Mallory, and wondering where it all went wrong. That is, until he’s hired by a diverse group of hopefuls who dream of becoming American citizens and believe he can help – giving him a new sense of purpose and a chance for redemption, as long as he remembers where he came from.

“Sunnyside” is produced by Universal Television in association with Fremulon and 3 Arts Entertainment.