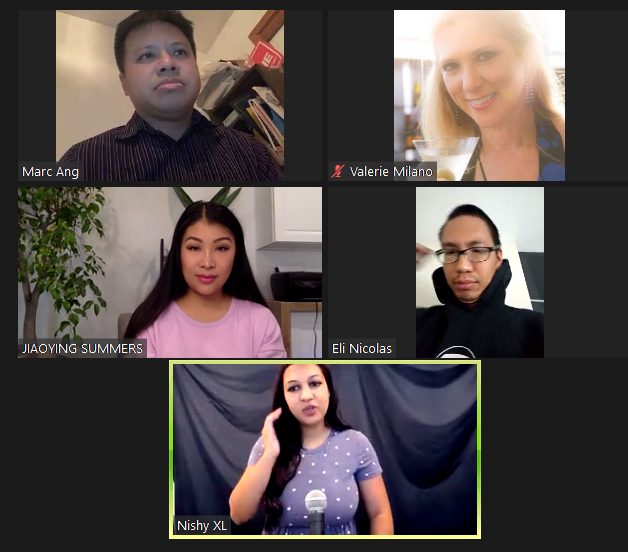 A few days before this weekend’s InvAsian comedy show, I got to catch up with three of the comedians, a nice cross section that included half Indian half Pakistani, Nishy XL, former Chinese beauty queen Jiaoying Summers, and Thai skateboarder comedian Eli Nicolas.

Watch the Hollywood Times’ exclusive interview with the three comedians here. We chatted about everything from their individual projects, busting stereotypes, parental expectations and the groundbreaking work for Asians in entertainment.

I was amazed at Jiaoying Summers’ entrepreneurialism, as she is the owner of two comedy clubs in Hollywood and Pasadena. You can tell she lives and breathes comedy. Jiaoying impressed me with her ability to chat about stereotypes and real talk about how Asian men are constantly left out of Hollywood, standing up for a group many don’t talk about or choose to ignore. Exploring tiger moms, helicopter moms and the funny things Chinese parents say to their kids, I could totally relate and celebrate.

Nishy XL made me laugh out loud several times, as she explored the way Indian Americans are most typecast and stereotyped, as she dug deep in her own unique background coming from Kashmir, a disputed region between India and Pakistan. Extremely articulate, she is a natural leader for the group she is starting to empower international women in comedy.

As an Asian American myself, the content and the “why” of these comedians stirred my emotions and made me so proud. They were verbalizing things I hardly discuss with others and yet, the experience, while personal, is also relatable across racial lines. That is where the Asian American diaspora in comedy is going to make an imprint on the greater culture, as comedians like the Filipino American Jo Koy are already doing.

Stay tuned as these comedians do great things in the future, and your first chance is to see them this coming weekend.

The comedy show will be taped live on Saturday, August 28th and Sunday, August 29th in Los Angeles’ historic Little Tokyo, at the Japanese American Museum, each with 30 minute sets from breakout comedians.

Executive producers Koji Steven Sakai (Little Nalu Pictures), Victor Elizalde (Viva Pictures), along with Quentin Lee of Margin Films backed up the second installment of Comedy InvAsian. The first installment, Season 1, had its world premiere on Hulu in 2018. “Global audiences are demanding diversity and Comedy InvAsian is proving to be one of those outlets without compromising quality”, said Victor Elizalde, President of Viva Pictures, as well as producer and distributor of Entre Nos, the leading Hispanic standup comedy show on HBO currently in its 5th season.

Comedy InvAsian 2.0 will feature original music created by The Slants, the legendary all Asian-American dance rock band who took on the supreme court and won the right to their name in a landmark case. The Slants’ founder Simon Tam and Quentin Lee are developing a scripted limited series about the band’s battle against the US Government to trademark their name.

Tickets are for sale at ComedyInvasian.com