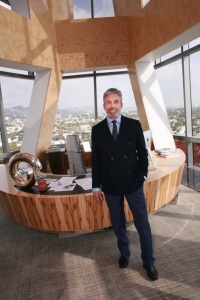 Story and photos by Jimmy Steinfeldt

Los Angeles, CA – Pacific Design Center (The Hollywood Times) 1/11/17 – I arrived early for the press conference. As I waited in the lobby the Chairman and CEO of Cohen Media Group, Mr. Charles S. Cohen came right up to me and introduced himself. Later, during the press conference, he noticed that one of the light bulbs in the building was not working and he immediately advised his staff. This attention to detail explains why he has been successful in both the entertainment and real estate fields.

Mr. Cohen is a real estate developer who has been a movie fanatic since the age of three when his mom took him to see Cinderella.  He grew up watching movies on television programs like Million Dollar Movies. He said his generation was about making the great American film while previous generations were about writing the great American novel. He made films as a teenager and won a Kodak award for his work. He often went to the public library, and the Gotham Book Mart on W. 47th St. where he bought publications on foreign films. He said there was no video back then and there weren’t any film schools around. 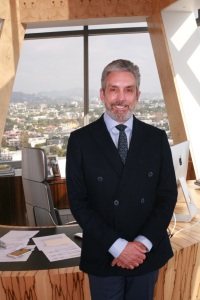 Later he wrote film criticism during his time at NYU, and he reviewed concerts, plays, and films while at Tufts University. He even interviewed Stanley Kramer. Eventually he went to law school and planned to be an entertainment attorney.

He joined his family’s real estate business and it so happened one of their tenants was a publisher. The publisher owned the largest privately held publishing company in the country and had sold a popular series of joke books. Mr. Cohen told the publisher he had an idea for a book about trivia. The publisher said that was a ridiculous idea and Mr. Cohen should stick to real estate. Six months later the publisher called Mr. Cohen and invited him to play a new game called Trivial Pursuit. The publisher wanted Cohen to write a bunch of books on trivia: movies, television, sports, history, and current events. Cohen said he’d do a book on movies,1000 questions and answers. They paid Cohen a $13,000 advance. It was published in 1985 and sold 185,000 copies. The publisher asked Cohen to do a sequel and Cohen said “I don’t do sequels.” The publisher said OK but we want you to know your trivia book on movies sold more copies than Mark Twain sold in his entire lifetime!

Eventually Cohen bought the Pacific Design Center in Los Angeles in 1999. He felt it was a place where the entertainment, design, business, and charitable communities could have art and film experiences, and hold lectures.  He bought the D & D building in New York in 1996 for similar reasons.

Cohen Media Group (CMG) began in 2007 when it licensed the film Frozen River through Sony Pictures Classics. The film won at Sundance. In 2010 CMG distributed Outside The Law, which was licensed from Studio Canal. It was nominated for the Oscar for Best Foreign Language Film. CMG has been to the Oscars three times with five nominations in total. CMG released My Afternoons with Margueritte and eventually licensed and released 63 films plus about 40 more from their library titles. CMG also bought Merchant Ivory Productions and had a great re-release of Howards End. The film Maurice with Hugh Grant is coming out in the spring of 2017.

CMG is releasing The Salesmen in a joint venture with Amazon Studios. Death of A Salesman is woven into the film. Cohen hopes The Salesman will be an Academy Award nominee. It already won the National Board of Review and the Broadcast Film Critics Association awards and it opens on January 27 at both the Angelika Lincoln Plaza in New York and Laemmle’s Royal Theatre in Los Angeles. The Salesman was directed by Asghar Farhadi who directed A Separation which won the Academy Award in 2012 for Best Foreign Language Film.

CMG purchased the Rohauer Library with 500 classic feature films and 200 classic shorts. These include films made from 1917 to 1972 including British, French, Avant Garde and more. Since 2011 CMG has been restoring films and one of the first was Buster Keaton’s The General which premiered at Cannes. CMG owns all but one of the Buster Keaton films and Keaton’s life story and image. CMG restored Alfred Hitchcock’s last British film (before Hitchcock came to the United States) Jamaica Inn and re-released it. Every film restored receives a theatrical release. That is followed by the other methods of release: streaming, broadcast, cruise ships, airlines, college campuses , Hulu, Itunes, FilmStruck, TCM, and of course KCET.

Cohen always wanted to own a theater or chain of theaters so he bought the Quad Cinema in New York, which will open in April 2017 after a massive renovation. Kevin Smith and Chris Wells are programming the theater. Cohen will be opening a theater in Palm Beach, Florida which Smith and Wells will also program. Cohen is looking at doing a theater in Los Angeles in the Silver Lake neighborhood. Cohen said “There are people who collect art. I like to tell people I collect art films. I think it is important to preserve and restore important films.”

The reason for this particular press conference was to learn about the schedule of films CMG is going to telecast through KCET. Cohen said KCET plays an important role in the fabric of Southern California, He’s a huge fan of KCET and he’s excited to present these films through KCET. The first film will be telecast on January 27 and is called What Is Cinema? by Chuck Workman. It’s a documentary featuring interviews with Kurosawa, Hitchcock, Altman, Bresson, Michael Moore and others. The February through March KCET telecast schedule is:

2-24-17 Fire Over England from 1937 by William K. Howard with Vivien Leigh and Laurence Olivier

I had the opportunity to ask Mr. Cohen a few questions. Since his list of movies includes Alfred Hitchcock’s Jamaica Inn and I’m writing the book Hitchcock’s Shadow-Conversations With the Great Directors, I asked what was the first Hitchcock film Cohen ever saw. He said it was The Birds, televised on the east coast on Saturday Night At The Movies. He saw Psycho much later.

I also asked Cohen about his vintage movie poster collection. He said he has been collecting film posters for twenty years including an unused Vertigo three-sheet designed by Saul Bass. His collection also includes  lobby cards from North By Northwest and posters from the early James Bond movies as well as The Godfather and Rosemary’s Baby. He also talked about his magnificent collection of 1950s and 1960s Italian movie posters which are displayed on the second floor of the blue building at the Pacific Design Center.