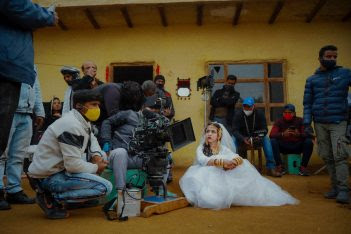 By Dr. Laura Wilhelm
Los Angeles, CA (The Hollywood Times) 5/29/22 – Coffined at 15 by emerging American female filmmaker Gayatri Kumar will have its world premiere at Dances With Films at 5 p.m. on Sunday, June 12th at the TCL Chinese Theatres in Hollywood.  The film was inspired by Kumar’s conversation with a child bride in Afghanistan.
Tickets are available now at:
https://danceswithfilms.com/coffined-at-15/
Shot in Noida, India, the film is set in present-day Afghanistan – one of the most dangerous places for women today.  Fifteen-year-old Rihana is put into a coffin at the hands of her father to be sold off to an old Taliban soldier.
The wedding is a cocktail of tears and laughter.  Rihana calls for help, but no one answers.  Then she remembers her God.
With a cast consisting of Afghan refugees, this short film showcases real tears and fears from those who have been victims at the hands of the Taliban.  Ms. Kumar was kind enough to discuss Coffined at 15 and other projects in the following online interview.
1-Is the coffin ceremony in this film an actual wedding ritual in Afghanistan?  Why are brides sold so young there?
The coffin ceremony is entirely symbolic.  There is no such ritual that takes place in Afghanistan.  Cinematic filmmaking is a true test of creativity where you can depict reality and intangible realms in a very graceful manner.  That is why we used this elegantly decorated coffin as a symbol of a girl’s early death in Afghanistan. In my conversations with Afghan women who were themselves child brides, I’ve heard them say over and over that they never saw happiness after marriage.  This coffin was painted red because it is bleeding with the girl who lies inside of it.
The coffin was by far the most emotional prop on the set.  Everyone from our actors to our makeup artist broke into tears looking at this prop.  It is also the prop that our team of female Afghan refugees could relate to the most, sadly.
Most of the time, an Afghan girl will be sold into marriage at a young age for money.  Either there is already a financial crisis that her father needs to get out of to feed his family, or he is looking to make more money.  Sometimes a father will accumulate some sort of debt after taking a loan, and because he can’t repay the loan he will give his daughter in marriage as a type of payment. 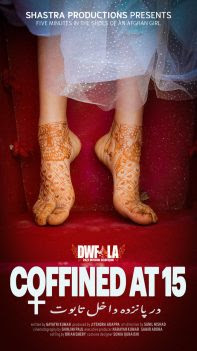 2-Our group at the French Riviera Film Festival judges short-form content, which we all think is especially powerful.  What is your philosophy about making short films like Coffined at 15?
Earthquakes, tornadoes, lightning, volcanic eruptions—what’s common among all these things?  They happen in the blink of an eye.  Anything that is truly powerful happens instantly.
Short films, too, hold that very advantage over features.  There are some movies that are more than an hour long but don’t stay in our minds for even fifteen minutes.  Then there are movies that are less than five minutes long but stay in our minds for many years.
That’s the shelf life of Coffined at 15.  It doesn’t take long to frame someone’s perspective, but your message must be clear. You should know the answer to the question: why am I making this?
3-I have actually seen true crime shows on Hulu about child brides in the United States.  Are you aware of this issue?
As a woman, I can tell you that wherever women exist on this Earth—there you are bound to find atrocities.  The issue of child brides specifically should have a lot of space on our streaming platforms and TV channels because it is such a massive issue.
I welcome those people who have made crime shows about child brides in the US and congratulate them for taking the initiative to make shows on such sensitive issues.  My respect for Hulu has gone up knowing they are giving space to such content on their platform.  I hope they will give even more space in the future.  Thank you for informing me about this.
4-What is the value of using real-life individuals like refugees as actors in a film like this?
I want to change how cinema operates within the next decade.  I am taking a bold step in that direction by practicing ‘democratic filmmaking’ which has nothing to do with politics, but everything to do with sharing the filmmaking journey with those who inspired your film.  Most movies you see profit from the stories of the poor, the marginalized, etc.
By casting refugees, I am making sure that they keep ownership over their tears and stories as much as possible and that the profits go to them.  There’s no one that can do what they do because no one has gone through what they have gone through.
This was the first time in their lives, as they told me, that these refugees in my film were treated with such respect.  They said those were the happiest days of their life.  As a director, I wouldn’t be able to get the same type of satisfaction if I had worked with professional actors.
5-What do you hope to accomplish by screening your film in the US?
When you’re talking about the US, you’re talking about a place where parents will knock on their children’s door before entering. There’s so much respect for privacy, and parenting has been crafted for generations to become like this.  If kids do anything wrong, they are punished by being ‘grounded’ over the weekends.
To show a country like the US that there is a hell here on Earth and that you are actually living in heaven is very important because it implies a responsibility to help your neighbors.  That is why this film is heavily targeted toward American parents and their children.
We’ve developed such a beautiful society over the generations where today space is given to people of all backgrounds, believers and non-believers.  I believe it is our responsibility to acknowledge that privilege, that we do live in heaven, and help those in need, who are living in hell.
6-I understand you are also working on a limited series about the crisis in Ukraine.  Please let our THT readers know more about this.
I can say that I am truly blessed in this lifetime to know about someone like Ukraine’s President Zelensky.  So many presidents of countries in the past have fled during crises—but President Zelensky has promised to fight until his dying breath on his land, not leaving his people.
I have such high respect for bravery and am eternally grateful that I have now seen an actual hero in 2022.  We make movies about Avengers and Thor.  Why do we need to when we have someone like Zelensky?
The mini-series I’m writing looks at stories of bravery in Ukraine during this crisis.  They are not your ‘traditional’ displays of bravery.  I can’t divulge any more information right now, but it is crazy emotional.
In a New York Times post I read some anecdotes from people in Ukraine about their time there.  One family was watching Narnia while hiding out in the basement, and their daughter asked, “Why isn’t there anything made for us that we can relate to?”  That really pushed me to make something for that girl and country.
As a filmmaker, I’m always looking to fill society’s void—giving people the medicine they need.  That’s why I focus on present-day issues.  There’s too much happening in the world right now for us to go back to something that happened in the 1920’s or 60s.