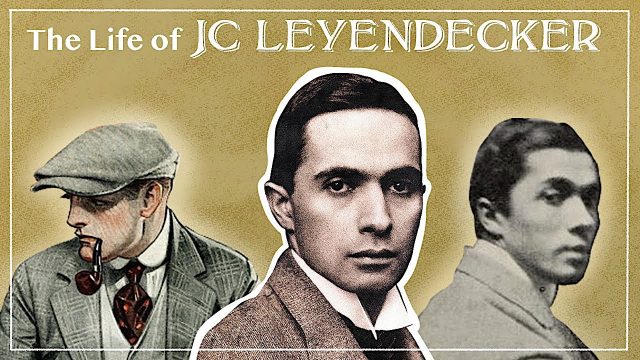 Los Angeles, CA (The Hollywood Times) 11/18/21 – Wednesday October 18 at the Melrose Rooftop Theatre in West Hollywood was a screening of a new short film by Ryan White entitled Coded: The Hidden Love of J.C. Leyendecker. This 29-minute short film had its West Coast premiere at the 2021 AFI Film Festival as part of their Meet the Press series and was nominated for a jury prize for short documentary. Earlier in June 2021, Coded picked up the award for Best Documentary Short Film at the Tribeca Film Festival. J.C. Leyendecker (1874 – 1951) was a German-American illustrator, considered to be one of the preeminent American illustrators of the early 20th century. He is best known for his poster, book and advertising illustrations, the trade character known as The Arrow Collar Man and his numerous covers for The Saturday Evening Post. Leyendecker’s work influenced how illustrators approached advertising and magazine art. He was an early inspiration for Norman Rockwell. But, more importantly, Leyendecker was a gay man whose lover Charles Beach was the primary model for his work. His art is coded with homoerotic imagery that was both subtle and subversive. 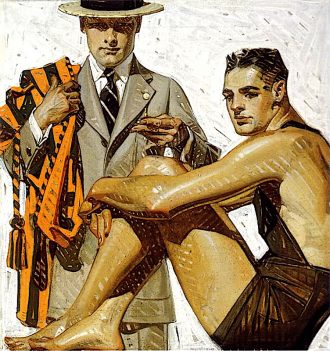 Between 1896 and 1950, Leyendecker painted more than 400 magazine covers. During the Golden Age of American Illustration, for The Saturday Evening Post alone, J. C. Leyendecker produced 322 covers, as well as many advertisement illustrations for its interior pages. No other artist, until the arrival of Norman Rockwell two decades later, was solidly identified with one publication. Leyendecker virtually invented the whole idea of modern magazine design. He has been overshadowed by his younger peer, Norman Rockwell, and his tame version of Americana. Former CUNY Literature Professor Alfredo Villanueva-Collado has pointed out elsewhere: “Norman Rockwell worshipped Leyendecker, but bad-mouthed him to death in his own biography. He was especially cruel to Beach, whom everybody seemed to hate because he was too good-looking, too prepossessing.”

Leyendecker’s most important commission was when he was hired to develop a series of images of the Arrow brand of shirt collars. Leyendecker’s Arrow Collar Man, as well as the images he later created for Kuppenheimer Suits and Interwoven Socks, came to define the fashionable American male during the early decades of the twentieth century.  Leyendecker often used his favorite model and life partner, Charles Beach (1881–1954). There is little question that J.C. Leyendecker’s homosexual identity is apparent in the homoerotic aesthetic of his work. Without question, Leyendecker excelled at depicting male homosocial spaces (locker rooms, clubhouses, tailoring shops) and extraordinarily handsome young men in curious poses or exchanging glances. 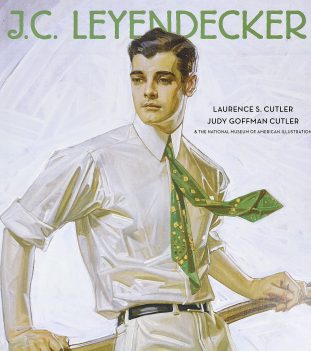 The subject of Ryan White’s film Coded is the way that J.C. Leyendecker’s illustration and how he defined the image of the American male in the early and mid-20th century. Alfredo Villaneuva-Collado, a former CUNY literature professor and collector of Leyendecker’s work, has explained that the research he has done into the gay artist and illustrator’s past. Especially interesting is Leyendecker’s relationship with the Arrow Collar Man, Charles Beach, who in 1914 moved into Leyendecker’s large home art studio in New Rochelle, New York, where J. C. would reside for the remainder of his life.

After studying drawing and anatomy under at the Chicago Art Institute, J. C. and younger brother Frank enrolled in the Académie Julian in Paris for a year, where they were exposed to the work of Toulouse-Lautrec, Jules Chéret, and also Alphonse Mucha, a leader in the French Art Nouveau movement.  The 1920s were in many ways the apex of Leyendecker’s career, with some of his most recognizable work being completed during this time. Modern advertising had come into its own, with Leyendecker widely regarded as among the preeminent American commercial artists. This popularity extended beyond the commercial, and into Leyendecker’s personal life, where he and Charles Beach hosted large galas attended by people of consequence from all sectors. The parties they hosted at their New Rochelle home/studio were important social and celebrity making events. 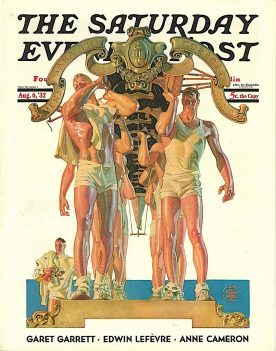 Due to his fame as an illustrator, Leyendecker was able to indulge in a very luxurious lifestyle which in many ways embodied the mood of the Roaring Twenties. However, when commissions began to wane in the 1930s, he was forced to curtail spending considerably. One person who is quite knowledgeable about Leyendecker is former CUNY Professor, Alfredo Villaneuva-Collado, who says: “I found it extremely interesting that there were three brothers – of which both Frank and J.C. turned out gay – and a sister, Augusta, who never married.” “Leyendecker had a fascination with asses, with muscles, and it was so evident. I kept wondering, how come nobody else says this? It’s right in your face, for heaven’s sake,” Villanueva-Collado explains.

The Arrow Collar industry seriously declined after 1921. During this time, the always shy Leyendecker became more and more reclusive, rarely speaking with people outside of his sister Mary Augusta and Charles (His brother Frank had died in 1924 as a result of an addiction-riddled lifestyle). While Charles Beach often organized the famous gala-like social gatherings that Leyendecker was known for in the 1920s, he apparently also contributed largely to Leyendecker’s social isolation in his later years. Beach reportedly forbade outside contact with the artist in the last months of his life. 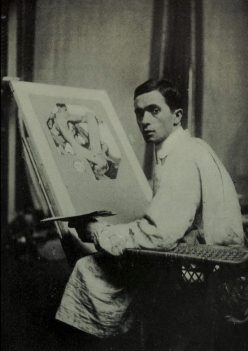 Directed by Ryan White, Coded: The Hidden Love of J.C. Leyendecker is a fascinating portrait of a lesser known LGBTQ icon. The documentary explores his work, his long-term relationship with his partner/model Charles Beach and the many ways he influenced advertising and popular culture through art. The film includes interviews, examples of his art and animated sequences – using actor Neil Patrick Harris as J.C. Leyendecker in some scenes. Coded is a 29-minute-long short and probably needs to be expanded into a feature length documentary to offer more biographical details and historical context. Ryan White is known as a documentary director/producer for The Case against 8 (2014), Good Ol’ Freda (2013), and Ask Dr. Ruth (2019).