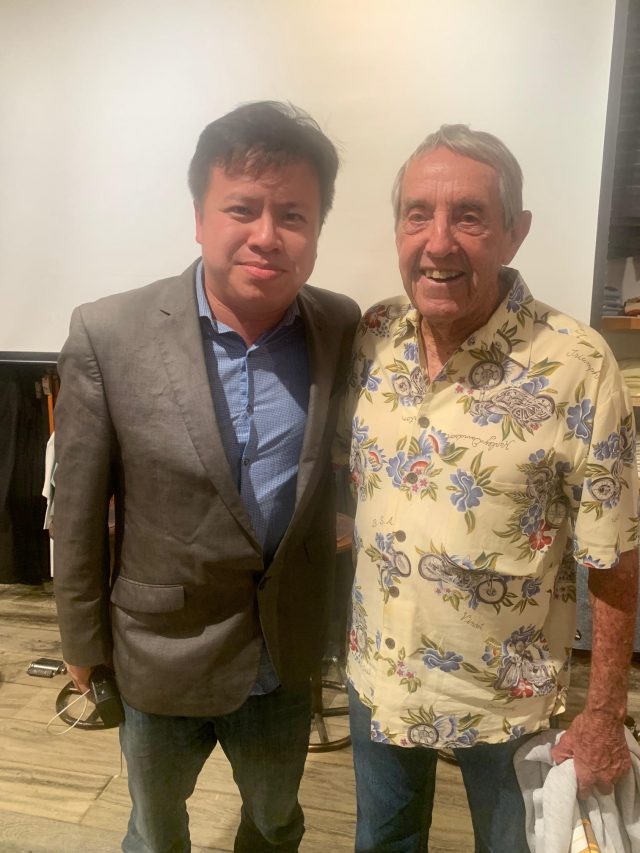 Los Angeles, CA (The Hollywood Times) 11/12/21 – Not many film festival openings are set at a surf shop but Coast Film Festival is clearly in a league of its own. Since its inception in 2019, CFF has showcased over one hundred best-in-class adventure and outdoor films including several premiers. Additionally, the interactive multi-day format and coastal location attract celebrated athletes and Academy-Award nominated directors who come together to network and discuss the art of storytelling and important social and environmental topics. So Hobie Surf Shop in downtown Laguna Beach was the venue chosen for the kickoff. 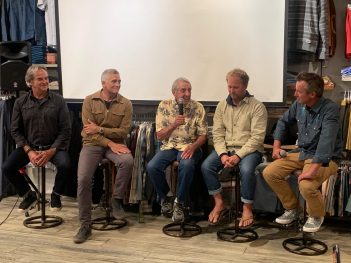 Almost everyone in attendance was a hardcore surfer or enthusiast. Presented by Vissla, the evening included a screening of the recently completed “The Birth of Endless Summer: Discovery of Cape St Francis”, the kickoff for the 3rd Annual Coast Film Festival. The film was followed by a Q&A panel with Laguna Beach locals, Director Richard Yelland and the 92-year old Dick Metz, an early pioneer of surfing, who stole the show.  It wasn’t just his great stories but Dick commanded the room, as people celebrated his legacy: one that changed surfing and pop culture forever, with his roots in Laguna Beach.

“Birth” tells the never-been-told-before story behind one of the most beloved and watched documentaries of all time, Bruce Brown’s The Endless Summer– a travel adventure that captured the hearts and imaginations of surfers and non-surfers alike and did $20 million in box office receipts, no small sum in the 1960’s and spawned two sequels and a generation of vagabond surfers traveling the world in search of waves and a good time, specifically women, Dick admitted in the Q&A. 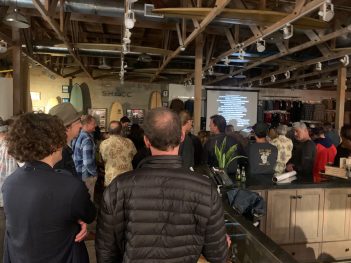 This film iteration follows Dick Metz, as he travels the globe from 1958-1961. Metz’s train-jumping, steamship-hopping tour led to his discovery of “the perfect wave” at Cape St. Francis, South Africa. Dick’s travels not only inspired his friend, Bruce Brown, and his making of the film The Endless Summer but also paved the way for the sport of modern surfing, as we know it.

Throughout the panel, which lasted over an hour, Dick frequently went back to the theme of following your heart’s passions and to figure out yourself and to soul search on what makes you stay dedicated to something. For him, it was the surfing, the girls and the sense of adventure. Some of the audience commented on how young spirited he was, clearly an inspiration to many. 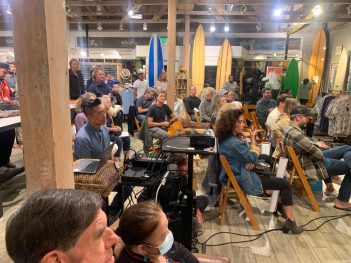 Despite being a free spirit, he believes in a strong work ethic that was ingrained into him since he was a young boy delivering newspapers in the rain. “If you’re passionate about something, it’s not work.” Dick was willing to rough it including sleeping under a truck in Africa. But that is what endeared him to the locals. “I never wore a watch.” It allowed him to relate on a human level.

Saturday evening will be a screening of “Waterman”, the story of a five-time Olympic medalist and Native Hawaiian Duke Paoa Kahanamoku, who shattered records and brought surfing to the world while overcoming a lifetime of personal challenges. Waterman explores his journey and legacy as a legendary swimmer, trailblazer, and the undisputed father of modern-day surfing, following the sport’s first-time inclusion in this year’s Games – a fitting tribute to his work promoting the sport around the globe.

The 3rd Annual Coast Film Festival (CFF) runs from November 10th – 14th at The Festival of the Arts in Laguna Beach, California.  CFF’s multi-screen indoor and outdoor theaters will show more than 50 premier surf, snow, skate, mountain biking, climbing and other action sports, outdoor, and environmental feature films and documentaries. Festival-goers will also have full access to watch lively post-screening panel discussions co-hosted by Outside TV’s Pat Parnell and TV personality Ariel Tweto, stroll through the festival’s art exhibition, and for the kids, film, art and environmental programs are scheduled throughout the weekend.

“As a community united by a shared love for the outdoors, the films, stories, and art we are presenting are inspirational and motivating that will hopefully create a spark for deeper conversations about the current health of our planet and actions to take for future generations,” said Ben Warner, Founder and Executive Producer of Coast Film Festival.

Tickets go on sale Friday, October 15th, and range from $25 for daytime general admission, $35 for evening general admission, $55 for an all-day pass, $95 for an all-day VIP pass, and $375 for an all-festival VIP pass. CFF is also presenting a wide variety of films and panel discussions virtually with a Video-On-Demand format from Tuesday, November 16th to Sunday, November 28th.  The online programming will be accessed through an easy-to-use digital platform built into the CFF website.

CFF is a proud member of 1% for the Planet and pledges a portion of proceeds to support these non-profit organizations Laguna Canyon Foundation, Surfrider OC, Protect Our Winters, and the Coast Film Emerging Filmmaker Scholarship. To learn more, visit www.coastfilmfestival.com or direct questions to info@coastfilmfestival.com.

You can view the full panel video of Dick Metz and friends here.