Indio, CA (The Hollywood Times) 5/12/22 – Of all the places to find yourself at Coachella, the DoLab should always be your number one. That’s what we discovered when the outfit set us up with backstage credentials, interviews, drinks, food, fans and misters to keep cool, and giveaways.  The DoLab, for the uninitiated, is a safe space for relaxation to, as they put it, “escape the heat as well as to catch some amazing music and surprise guests.”

And boy, did they deliver. Our time at the DoLab was the way we kept cool, collected, and organized during the beautiful chaos that is the world’s most recognized music festival. The small stage and village functions almost as its own smaller festival. The first weekend, they featured 18-year-old Utah sensation Ford, as well as DJ Seinfeld and Dombresky. Weekend two, they welcomed house music 29 Palms, Mary Droppinz, Sonny Fodera, and ESCAPADE (WALKER & ROYCE + ARDALAN), whose futuristic tracks melded with dance beats were unforgettable. To read more on Mary Droppinz https://thehollywoodtimes.today/mary-droppinz-drops-in-at-coachella-music-festival/

The Coachella mainstay is known for housing itself under a huge, artistically conceived structure in line with the festival’s traditions. This year’s structure, spanning out over the horizon at Indio, was called the Beacon – a pointed structure with shades spanning out for festival lovers seeking reprieve from the hot sun. 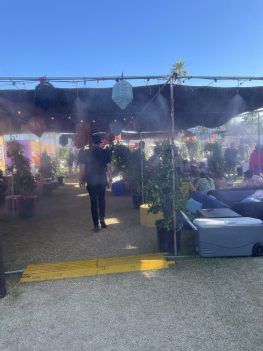 So, if what you’re asking is, will we visit the DoLab again, the answer is yes. The Hollywood Times will be back at Coachella, and the legendary DoLab is our place to crash, laugh, and vibe at the world’s most famous music festival. Every year from here on out.