Indio, CA (The Hollywood Times) 4/17/22 – Day 2 of Coachella brought an exuberant calm that can only be explained by its absence over the last two years. It’s as if fans are afraid that if they jump in with too much of the volatile excitement that has defined festivals past, it might dry and disappear again. There’s respect for the privilege of being here.

The million-dollar boho looks are back, the incredible sets, the gorgeous unpredictability of guest appearances. Nicki Nicole finally debuted on US stages at the Sonora. Pablo Vittar also made history as the first drag queen to officially perform at the world famous music festival. 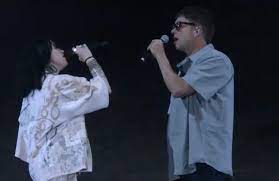 And the ever-beloved Billie Eilish graced Coachella as the event’s youngest ever headline act. As the festival matured into its second night, it became apparent that once again, surprise guests would be a defining part of the action. Khalid jumped onstage with Eilish, as did Damon Albarn of Gorillaz and Posdnuos.

Appealing to the crowds’ more aged demographic, alt singer Beck joined Flume, creating even more depth to the ever-deepening versatility of the festival. It was truly a day for firsts, and a day to remind the world that this festival truly is a festival for all ages. 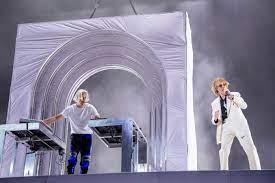 “I never imagined that so many people would come watch my first show in the U.S,” said Nicole, who seemed to echo the sentiments of so many of the festival’s Covid-weary patrons, who may well have never imagined finally being back at their favorite festival.

As the night deepened, Megan Thee Stallion took the stage for her highly anticipated set, performing “WAP” and “Savage” in a seriously strappy silver ensemble and bolstered by her seriously athletic backup dancers.

And rather than feeling like the weekend winding down, it all felt rather like we’re just getting started–on music, on euphoria, on life itself. We can’t wait for more.

To see the full lineup of Saturday’s acts, click here. We’ll be covering the entire festival. Check out our social media for more information, and read our daily coverage here.