Matoma has been receiving worldwide news coverage for his charity efforts from outlets like The Independent, MSN, Yahoo News, and Metro UK, and the billboards are still up now through Weekend 2.

In light of recent world events, inspirational Norwegian DJ and producer Matoma has decided to use this culturally impactful gathering as the platform for a truly meaningful cause. Below is a picture of Matoma’s billboards on i-10 to Coachella – originally intended for promoting his new music but with the tragic war continuing in Ukraine he’s decided to put them towards raising funds and awareness for Ukraine humanitarian aid organization Music Saves UA. You can see what the billboards look like via a drone flyover HERE also. 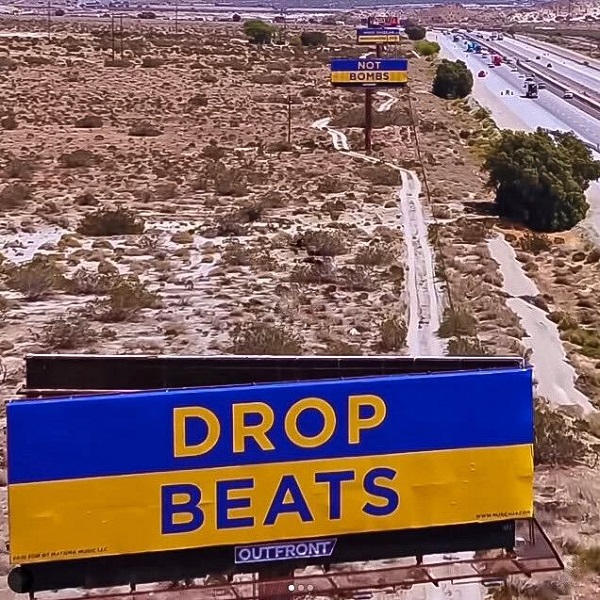 Music Saves UA is an organization providing humanitarian aid for those who need it most in Ukraine, started in part by organizers of another music festival – Atlas Festival – whom Matoma performed for in 2019. In response to the needs of the time, their nightclub is now converted into a humanitarian headquarters providing much needed supplies to those most affected by the war.

Best known for songs like “All Night” with The Vamps and “I Don’t Dance” with Enrique Iglesias, Matoma is also recognized globally for his charity work behind the music. He recently headlined Gravity Festival in partnership with EDM-juggernaut Proximity, using his performance to raise money for the Red Cross’ Ukraine Crisis Appeal, and matched the donations personally. His livestream broke past records for the festival and raised $10,000.00 USD in just 45 minutes.

As Tom (Matoma) says “Only a few years ago, I played at a festival called Atlas in Ukraine to a beautiful crowd of people, just like those attending Coachella this year. Those days of freedom are sadly gone for them, and now bombs rain down on their cities. These same people from Atlas Festival have converted their nightclub to a humanitarian centre, providing supplies and care for those who need their help. This is one of the most inspiring things I’ve seen and gives me much needed hope. This club was once filled with free, happy people, and now driven with a true purpose of goodness it rises to a new, greater purpose. This is the power of music and love.”

Matoma recently teamed up with electronic dance-pop trio A R I Z O N A to release their heartwarming collaborative single, “Heart So Big,” written with A R I Z O N A’s longtime collaborator PJ Bianco as a love letter to his son with autism, which will also have an accompanying charity component related to Autism Awareness Month.

Since making his debut in 2015, Matoma has joined the ranks of electronics’ most popular and innovative new stars, prompting Rolling Stone to declare him the “leader of tropical house’s next big wave.” Born Tom Lagergren, Matoma scored a breakout success in 2015 with his RIAA gold-certified single, Matoma & The Notorious B.I.G’s “Old Thing Back (feat. Ja Rule & Ralph Trevisant),” featured on the groundbreaking 2015 debut album project, Hakuna Matoma. Since then, Matoma has made waves with life-affirming originals (including the smash “Running Out”) alongside cross-genre collaborations with the likes of Jason Derulo, Jennifer Lopez, Dua Lipa, and The Vamps as well as a dazzling array of remixes for artists as varied as Coldplay, One Direction, Snoop Dogg, Eminem, and Sean Paul, among others.

Matoma’s journey reached a landmark moment with the release of 2018’s acclaimed debut album, One In A Million, which has garnered over 1 billion streams worldwide. Hailed by Billboard as “a fresh collection of varied dance-pop compositions…heavy with feels from start to finish…(and) poised for pop-crossover success with some stirringly emotional moments and dance floor feelings,” the album includes a quartet of worldwide hit singles, including “False Alarm (Feat. Becky Hill),” “Lonely (feat. MAX),” “Slow (feat. Noah Cyrus),” and “All Night (feat. The Vamps),” all of which have now amassed over a billion total streams and counting.