Indio, CA (The Hollywood Times) 5/1/22 – Our first year at Coachella truly lived up to expectations, and went a little beyond. We knew we’d be star-dazzled, but weren’t quite prepared for the stunning art installations, intimate access to world-famous acts, and incredible feeling of connection.

The festival started out with Kanye West pulling out at the last minute – but Swedish House Mafia and The Weeknd had no problem replacing him as nothing short of iconic headliners. We couldn’t believe when we caught wind that Justin Bieber would hit the stage as a surprise guest, indeed he did, giving a dynamic performance alongside Daniel Caesar on night one.

Stunningly talented soul-pop band Lawrence made their Coachella debut on April 15, and hit the stage again at the Mojave tent on April 22 with an electric set. Already seeming veterans of the festival, they seemed almost excessively comfortable at the massive festival. The eight-piece soul-pop band, led by sibling duo Clyde & Gracie, hit it big with their single “Don’t Lose Sight” – a song about perseverance and determination. Clyde’s been a hit songmaker since age 5, and Grace is an accomplished actress. They are, in fact, “The brother/sister musical phenomenon you need to hear,” according to Affinity. We agree.

The sensational band preaches the importance of staying strong and ignoring the haters, which seem to proliferate with the pervasiveness of the internet. The song is co-produced by Jon Bellion & Jorgen Odegard and written by the band, and the high energy single is all about vigorous vocals and big melodies. Simply put, the song makes you want to get up and dance. The acoustic version quickly went viral with over 4.3 million views on TikTok in its first week. 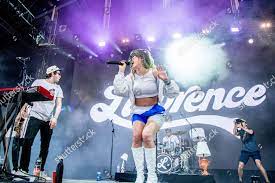 The band’s 3rd album, HOTEL TV,  dropped July 23rd of last year. The album features incredibly catchy Bellion-produced singles including  “False Alarms,” “Casualty,” “It’s Not All About You,” “The Weather,” and “Freckles.” Not surprisingly, the band’s efforts have garnered tens of millions of streams across all platforms. Read Lawrence’s BIO for their full story including Clyde’s success as a songwriter (from the age of 5) and Gracie’s career as an accomplished actress. 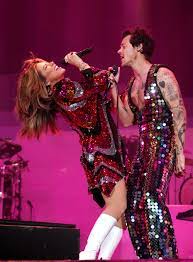 Harry Styles brought Shania Twain onstage, putting his crowd into fits, and performed “Man, I Feel Like a Woman.” The two brought so much sparkle to the stage, we thought we might be blinded. Billie Eilish made history, in the same vein as Beyonce, as the festival’s youngest ever headliner. “Sorry I’m not Beyonce” Eilish joked to her crowd on Saturday, “I love you!”

The fashions were literally to die for. Doja Cat and Anitta wore custom Roberto Cavalli. YouTube broadcast the action. You’ll never have an excuse for missing Coachella again, and the streaming show was attended by a massive overflow of online viewers.

Weekend 2 brought the magic of Karol G., who told THT that she was “very happy” with her debut performance at the legendary festival. Nathy Paluso performed on April 24 and re-posted a snap from our interview to her stories, literally blowing up our Instagram.

Harry Styles returned, this time to bring Lizzo to the Stage. Conan Gray wore a legendary hot pink jumpsuit, LP Giobbi showed up unannounced (although we got the inside scoop early) at the DOLab, and Anitta planted a kiss on her backup dancer for all the world to see. Nicki Nicole also gave us an exclusive interview. Hayley Williams joined Billie Eilish for her second set, and Kendrick Lamar showed up and shocked the festival, rocking the schedule with an (of course) amazing performance. And we’ve barely scratched the surface on the celebrity access we enjoyed; we’ll be publishing more interviews in the weeks to come. 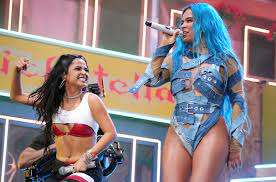 All of it showcased the thing Coachella is known best for – connection. Something Karol G spoke about in our exclusive interview with her. “Do you know, that’s my favorite part in the world,” she told THT. 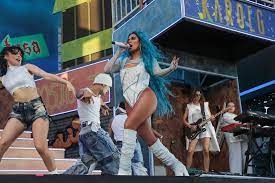 “Like from what I do, it’s like to be onstage and to get the opportunity to connect with new people, because when you’re on tour, you know, they’re there for you because they’re paying to see you and they’re there for you. But when you are in these different festivals, you know, you have the challenge to conquer these new people and to show your music and make them feel the connection…So for me, that’s amazing.” 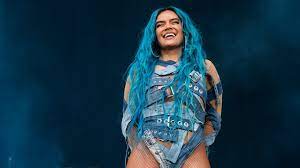 Karol indicated she might be back next year. We hope “Queen of Coachella” Vanessa Hudgens will be again. And we know we will be.