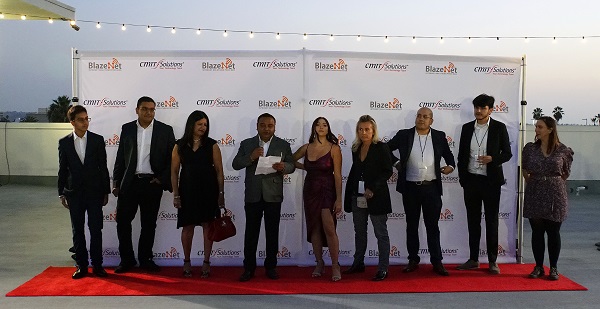 The first inkling that this wasn’t your standard IT debut party was the 30’s jazz band. Marquis Howell and the Hollywood Howlers tore up the classic “After You’ve Gone” as the first guests arrived.

The stunning display at the Peterson Automotive Museum – vintage Ferraris, Lamborghinis and the like – provided a luxurious start to the official opening of CMIT Solutions offices in Beverly Hills and Westwood. And it was quite a splash. The vintage cars indoors gave way to a wild outdoor setting that included tasty roasted donut-burgers from the wild folks at Gastro Garage, freezing nitrogen-popped popcorn, a DJ blasting 70’s and 80’s funk chestnuts, and the rebirth of 70’s roller girls with a modern twist. It was an eye-popping setting that belied a far more serious message about cybersecurity.

CMIT Solutions provides “essential IT services – cybersecurity, remote work support, and IT support” to small and midsized business clients. The company is seriously expanding its presence in and commitment to the US market with these new Los Angeles offices. They have been ranked number one in its category in Entrepreneur Magazine’s Franchise 500 list for the last seven consecutive years.

CMIT CEO, Sharad Varia, was intent on making a big splash – after all, the millionaire businessman has made mega-successful strides in this line of work in his native India with his company Blazenet, which will also now run out of Los Angeles alongside CMIT. Mr. Varia and his team also developed Blazenet into a market leader in the Middle East. The theme of the evening was a serious one – if you have a business, who is protecting you from ill-intentioned hackers? Is your data stored in a way that no one can reach it? As computers and data-handling have become the cornerstone of modern business, the secure protection of that data has become more critical than ever. Mr. Varia and his guests, like author/ethical-hacker Ted Harrington, came to speak to the sizable crowd about the critical need for data protection.

When we asked Mr. Varia his thoughts on the US market, he responded “When I was here in 1992 at Ohio University, my friend and I connected via modem to the first ISP in the US – that was Prodigy. After getting my degree in industrial engineering, I went back to India in 1995. I studied the ISP business and started up in India, but policy problems – really so many different problems – arose. We just kept going and survived for 22 years. Now we have 32 offices in India, and an office in Beverly Hills that will grow.” By his own account, Mr. Varia is not a public speaker – he is a doer and a family man with a top-notch team and a strong traditional business sense which he applies to modern technologies. “There is always room for good work, if you do your work properly. If someone is not doing their work properly, good people will come and take their place. We have the technology, we know the technology, we study hard, we work hard, and we provide great service protecting our clients.”

As he surveyed the crowd – which appeared to include many seasoned IT workers and influencers – he stated “I have not gone home to India in 6 months. My whole team is taking care of business there, and it’s still growing. People will know about us. The thing about my company – sometimes we approach a customer today. But they are not in the market [for our support], they are not facing any problems, or they are happy with their services. But eventually, a time will come, and they will face a problem. [If we network and present strongly] they will know where to go.” This was spoken with the ease of a jovially confident man who has seen this particular chain of events – non-interest, then a concern-sparking event, then eventually becoming a client – time and time again.

Another compelling speaker this evening was author and ethical hacker Ted Harrington, who wrote the #1 Amazon best-selling book Hackable: How to Do Application Security Right. CMIT invited him to speak on the strength of his background. He’s not just a compelling speaker and author, but the guy whose company first hacked the iPhone, amongst other milestone achievements in the hacker world. He stressed that “hacking” is not a bad word – he “hacks” as a way to find flaws in security systems in such a way that companies can fix them before the bad hackers find these weaknesses. As his company ISE (Independent Security Evaluators) is working in the same cyberspace as companies like CMIT, it was a great fit to invite him to the event to speak. In our conversation, he lauded companies like Tesla (who was a partner in the evening’s event) and Apple for their commitment to finding flaws in their systems to better address potential security risks, saying “my ears perk up any time I hear someone talking about tech that changes the way we access information. Tesla is a great example, where you are now accessing driver location, vehicle to vehicle communication, autonomous driving. These are all new types of information; thus they are the gateway for a possibly bad-intentioned hacker to create huge problems. So, when I hear stuff like that, I’m drawn to the gunfire – that’s where the battle is and that’s where I want to go.” I took the opportunity to ask Mr. Harrington about specific people who inform his views, and he responded “I’m in a unique position in that I employ the people that I get all my advice from, so everyday I’m learning from those people.” He also went on to recommend the following books and authors to get more in-depth information in this critically important emerging field:

Spam Nation by Brian Krebs, as well as his website, the eye-opening https://krebsonsecurity.com – for the curious, I will say not a website to read in the evening as you nod off to sleep – let’s just say bad actors in cyberspace are always on the prowl, and journalist Krebs soberly documents such alarming developments.

As the evening wound down, it was interesting to consider the party atmosphere convened to raise awareness on such a serious issue. I appreciated Mr. Varia’s idea of “bringing folks into the fold” and educating them on his services without necessarily banging away on his concepts. Those that understood the very high stakes filed away the information to speak to him at a later date – the rest just enjoyed a dazzling “only-in-LA” type of evening courtesy of CMIT Solutions.