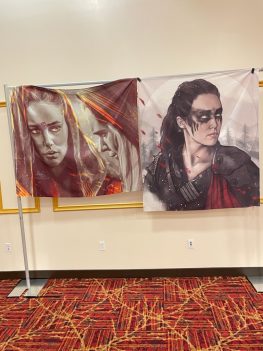 Las Vegas, NV The Hollywood Times) 10/9/21 – On October 8th through the 11th, ClexaCon held its convention in Las Vegas, Nevada at the Tropicana. This convention centers lesbian, trans, nonbinary identities in entertainment, content creation, and fandom. This event is one of the first events ClexaCon had in-person after its virtual convention in April. Its main goal is to connect and empower those within LGBTQ+ communities. ClexaCon provides an overall space that is inclusive, where, as Warrior Nun’s actress Toya Turner, puts it, “. . . all the pronouns that I’m seeing. That is one my favorite things that I like.”.

We had some time to catch up with some of the celebrities and they updated us on their latest projects. Maddie Philips and Devon Hales from Teenage Bounty Hunters and “it is a not only a your classic coming of age story about two twin sisters, it’s also about young people discovering who they are in a conservative environment which causes a lot of tension and really makes them think about who they want to be despite what pressures of society and people around them would want for them . . . .”.  ClexaCon focuses on queer communities and their stories; yet, these stories take ideas from the real world. When describing how some of her favorite stars are the ones who “make a lot of noise and destroy a lot of shit,” Turner describes her personal relationship with her project, Warrior Nun, especially as it deals with faith, “I went to Catholic school, Christian school, and Lutheran school. I’m religious for sure . . .I’m more spiritual now . . . I think it just made me appreciate being faithful and hopeful. “Being on the show pushed me to deepen my spiritual practice and better appreciate the meaning of community.”

Thus, even though Turner mentions her edgy side, Turner has a deep spiritual connection to her faith and a show that focuses on faith-based themes. 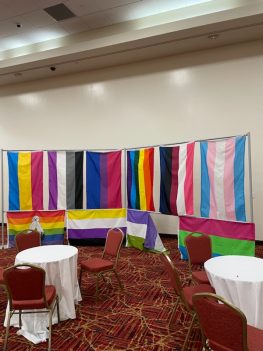 ClexaCon will continue to showcase both the edgy, the avant-garde, and the familiar to reach audiences within queer communities and outside of these communities as well.