‘Xena: Warrior Princess’ Was a ‘Template of What a Mentor Should Be,’ Say Panelists

By: Valerie Milano and Barry Garron 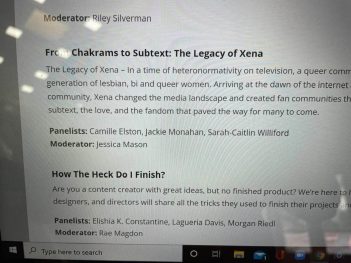 Las Vegas, NV (The Hollywood Times) 10/13/21 – You might not see a connection between a kickboxer, a standup comedian, a creative director, and an author who writes about binge viewing the supernatural. At least not unless you attended the Clexacon convention over the weekend in Las Vegas — and sat in on the panel about the legacy of Xena, warrior princess.

Virtually everyone on stage, and in the audience of 50, spoke of the series that starred Lucy Lawless with unabashed admiration and affection. The cult favorite ran in syndication from 1995 through 2001.

Author Jessica Mason can recall the first time she saw Xena. Mason was in eighth grade and puzzling over gender identity. “Maybe I felt about girls the way Xena (and companion Gabrielle) do,” she thought.

Comedian Jackie Monahan started wearing her hair the way Xena did. “We would [pretend we were lesbians. I kind of fell in love. I didn’t know if I wanted to be like her or with her,” Monahan said.

Sarah-Caitlin Williford, a professional kickboxer, knew at eight or nine years old that Xena was her role model. “She was my template of what a mentor should be.” Now seeing Xena through adult eyes, she realizes she bonded with the character.

Camille Elston used to name her stuffed animals after characters on the show. Later, when she was in college, she binge watched the show on Netflix, she said.

They find other ways to relate to one of their all-time favorite characters.

“I had a bad abusive father,” Monahan revealed at the convention. “Xena was bad at the beginning but then she makes up for it by fighting for everything that’s good. It taught me to try to do what’s right.”

To some extent, Xena was both ahead of and a product of her times,” Mason added. “It would be explicitly queer to look at it now but they did the most they could at the time. I love how weird the show got. I loved how Xena leaned into the camp,” she explained.

Even small details gave rise to complicated discussions, such as whether Gabrielle looked better with short or long hair or which weapon is most preferred (most said it was the staff.) 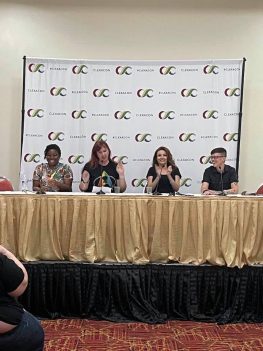 So fervently are the characters adored that Mason said many fans are asking themselves ‘what would Xena do?’ instead of ‘what would Jesus do?’ In other words, WWXD? Has become a “thing.”

Even after 25 years, the show is so powerful that its message still resonates, Elston said. “It’s okay to be different. Just figure out what your own path is.”

Added Williford: “The show instilled in me a good moral compass. You always use violence as a last resort.”

According to Looper, you can actually now watch all of Xena, free of charge, on The Roku Channel or Tubi.

Various purchase options for the series are also available through Amazon Prime Video and Google Play.