By Kimberly Sanchez and Valerie Milano 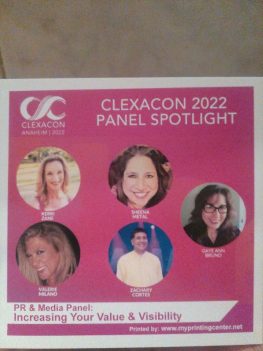 Anaheim, CA (The Hollywood Times) 8/30/22 – ClexaCon returned this past weekend, and The Hollywood Times was there as a media partner to cover the action. Senior editor Valerie Milano even sat on the Media & PR panel as a guest – “this is one of our most important yearly events” says Milano. But more on that later. Here’s our rundown of events, from the panels to the social events and everything in between!

First off, when checking into the event, they were Covid safe asking for proof of vaccinations, otherwise you would have to miss out.  The festivities, which included virtual options, began with the “pool takeover” on Friday, which you definitely didn’t want to miss if you had friends attending the convention. Since plenty of the convention-goers were staying at the Anaheim Marriott Hotel, they were able to enjoy the fun there and then change for the next events – speed friending and game night, complete with board games! Friday night wrapped up with the final events, Drunk Lesbians Watch and the “A League of Their Own” watch party. Some, like THT reporters, decided to head out with a bunch of ClexaCon guests to the Theme Parks ie. Disneyland and California Adventure – what a blast complete with a scavenger hunt. The host hotel, the Anaheim Marriott was the place to be.  The bar, the delicious food, the ballrooms, vendor rooms, and hotel rooms, were typical of the excellence of the Marriott family of fine hotels.

Saturday’s special events included a special appearance by Boi Band, the riotous Queerly Beloved Revue with cosplay contest, burlesque (which was more of a classy strip show), and Queer Karaoke. A trip to Disneyland rounded it all out and solidified ClexaCon as THE place to be over the weekend. But those were just the highlights. The “meat and potatoes” of the convention, the part that we took with us into our professional lives, included informative and entertaining panels that highlighted some of the most elite players in the industry.

The Casting For Film & Television panel featured Jen Pirante, Beth Ryne, Kayleen Casey, and Giovannie Espiritu. Especially notable was Jane Clark, award winning filmmaker of Elena Undone (as producer,) Meth Head, and Crazy Bitches, as well as an impressive 8 shorts and 2 seasons of the short form TV series Crazy Bitches. She appeared on multiple panels, showcasing her vast knowledge, including Creating Queer Fantasy, Horror and Sci-fi worlds, and The Reality Behind The Illusion of a Love Scene. She’s worked with Tom Sizemore, Lukas Haas, and Wilson Cruz, among others, so hearing her perspectives, particularly on casting, was extremely fascinating.

Also notable, and a dear friend of THT was Marina Rice Bader, who founded Soul Kiss Films in 2009, an independent company dedicated to producing compelling narrative features with a unique focus on the female experience. She worked with Jane on Elena Undone, and was also an executive producer on A Perfect Ending. She also went on to write/direct and produce Anatomy of a Love Seen, Raven’s Touch and Ava’s Impossible Things. She was responsible for the web series Dating in Place, released during COVID in 2020.

Overall, this panel was one of the most dynamic and certainly most informative, as we learned so much about the nuances that go into the art of casting both film and television roles, straight from top experts in the field.

The Creating Community panel also stood out, as it focused on how people create events that bring people together and into part of a larger community through queer events. We learned what inspired them to get involved, what their challenges and rewards have been as they’ve carved out safe spaces for the LGBTQ community. Anna Goodman sat on the panel as the moderator, she produces and hosts Open Dyke Night, Hidden Hearts, and is the former Director of Programming for JQ International”.  Goodman told THT “It was such a pleasure to connect with other community organizers and share our experiences and advice with one another. I find it so meaningful to see more folks stepping up and creating niche spaces for our lesbian queer community, especially with the huge lack of lesbian bars that exist today. The more we work together and support one another, the larger our overall impact is and that is really special”.  Nik Kacy of NiK Kacy Footwear and Equality Fashion Week was also on the panel, and another media partner and friend of THT,  provided a unique perspective as an  L.A.-based entrepreneur/designer/ and event producer.

Our favorite panel, naturally, was the PR & Media: Increasing Your Value & Visibility panel. Our Senior editor Valerie Milano was a featured speaker, alongside Zachary Cortes, Kerri Zane, and Sheena Metal, Gaye Ann Bruno, (host and producer of between the sheets podcast) moderated this lively discussion, which sought to explore how public relations and media tie directly together, and how to increase value and visibility. Gaye Ann mentioned to THT “I was honored to be asked to be the moderator on such an insightful panel.  It’s so wonderful to be part of a team that is so experienced and knowledgeable and it’s a wonderful feeling  to educate people and give back to our amazing community. ”

We immensely enjoyed the panel: That’s So Funny: Positive LGBTQ+ Representation in Comedy, and especially notable were personal friends and stand up comedians Renee Santos and Jackie Monahan, who lit up the panel with their sharp commentary, knowledge, and of course, incredible sense of humor.

The panel The Reality Behind The Illusion of a Love Scene–well, you can imagine. Fascinating, titillating, and yet surprisingly technical, this panel took guests behind the scenes of what happens during a love scene. Experts Marina Rice Bader and Jane Clark took us behind the curtain, using real life examples from their work. From the emotional to the technical and beyond, we loved hearing them speak on this topic.

Finally, we loved the panel: Building Fictional Worlds When the Real World is Crumbling. Col. Julie Tizard stood out as an award winning author and a retired professional United Airlines pilot, speaking about her newest novel, “Free Fall at Angel Creek.”  Tizard told THT “ClexaCon was outstanding! As an author, I loved the opportunity to collaborate with other creative people in the film/TV industry. I will definitely attend this amazing event again.”

Next year will undoubtedly include so many of the same dear friends and stimulating conversation. But for now, we’re still glowing from the 2022. To learn more about ClexaCon, visit their official site here.