Inspiring Positive Change for the Planet

Los Angeles, Calif. – PBS SoCal and KCET, Southern California’s flagship PBS stations, along with national satellite network Link TV, announced the episode lineup for the new season of Link TV’s acclaimed original environmental series EARTH FOCUS in partnership with the Thomson Reuters Foundation. In addition, the annual EARTH FOCUS ENVIRONMENTAL FILM FESTIVAL, the only festival of its kind in Los Angeles, will return virtually for a fourth year from April 24-29.

Launched in 2007 on Link TV, EARTH FOCUS is the longest-running investigative environmental news program on U.S. television. This season, co-produced by the Thomson Reuters Foundation and from presenting sponsor Hasa International, examines the social and environmental determinants of health affecting a wide range of populations living in the United States, including farmers suffering the effects of rural isolation, warehouse workers breathing polluted air, and uninsured families dealing with the stress of paying for health care. Since its inception, the series has provided audiences with urgent local and global environmental coverage that spotlights in-depth reports on key issues such as endangered species, climate change, environmental health and sustainable practices. The new season of EARTH FOCUS will air as follows (*schedule subject to change):

Through the stories of the patients and doctors of AltaMed, this episode exposes the socio-environmental determinants of health in the city of South Gate, California. 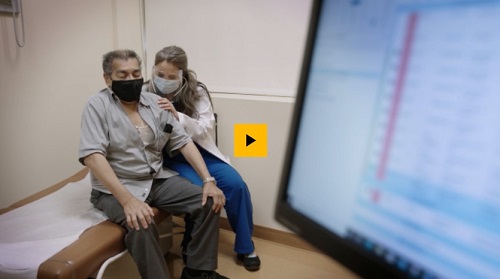 This episode explores how climate change has taken a toll on the mental health and well-being of farmers and homesteaders in Northern California, Arizona and Wisconsin. 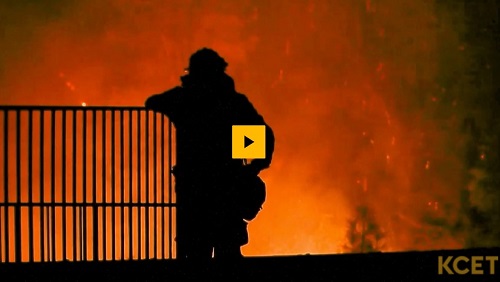 Everyday people are standing up against the e-commerce giants polluting the Inland Empire.

Following the opening night screening, the Festival will transition to virtual screenings for the next five days with Q&A discussions following each screening encouraging a better understanding of and dialogue on environmental issues. The virtual 2022 film festival extends public media’s mission of strengthening communities through education with this year’s mission aiming to inspire positive change and engage viewers of all ages while raising funds to support public media’s future environmental programming.

General admission tickets for the EARTH FOCUS ENVIRONMENTAL FILM FESTIVAL are available starting today. Ticket options include a $45 all-access pass to attend all of the virtual film screenings April 25-29 and post screening discussions taking place on the Eventive platform. Alternatively, $15 individual screenings can be purchased at  https://efeff2022.eventive.org/welcome

Festival schedule is as follows (*subject to change):

In this uplifting documentary film from director, editor and producer Thomas Verrette, a diverse group of middle school students in the heart of California’s Silicon Valley compete in a nationwide tournament to program free-flying satellites aboard the International Space Station. Featuring NASA astronauts Candy Coleman, Jack Fischer and Steve Smith. 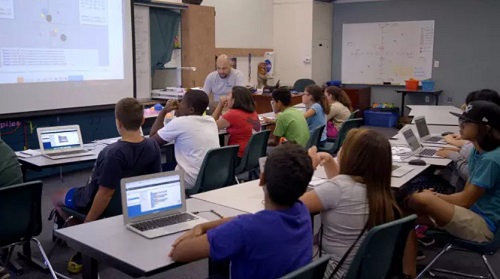 A gripping documentary capturing the horror and heroism of the 2018 raging wildfires that forced the frantic evacuation of thousands of residents from Malibu and Paradise, two very different California communities. Two-time Oscar®-nominated filmmaker Lucy Walker investigates the reasons California has become increasingly dangerous and what can be done to lessen the staggering death and destruction that wildfires cause. 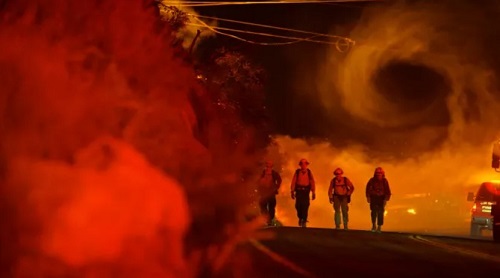 Immediately following the screening, a pre-recorded conversation with filmmaker Lucy Walker, plus subjects from the film. Moderated by chief film critic for Deadline, and host of the KCET Cinema Series and KCET’s MUST SEE MOVIES, Pete Hammond.

For millennia, Native Americans have successfully managed their natural resources despite discrimination and forced colonization. This collaborative documentary takes viewers across deserts, coastlines, forests, mountains and prairies to witness how various Indigenous communities are restoring their ancient relationships with the Earth. It also reveals that their time-tested practices are increasingly essential in our rapidly and dangerously changing world. Directed by Costa Boutsikaris and Anna Palmer.

Immediately following the screening, a pre-recorded conversation with the subject of the film Dr. Michael Kotutwa Johnson of the Hopi Tribe Fund (NAAF), co-director/cinematographer Costa Boutsikaris and co-director Anna Palmer

An expedition to the North Pole by eleven women from the Arab World and Europe, led by British explorer Felicity Aston, is determined to succeed against all odds. Award-winning filmmaker Holly Morris and an all-women crew document this daring group during one of the most chaotic polar seasons in history — in what may be the last-ever, over-ice expedition to the top of the world. 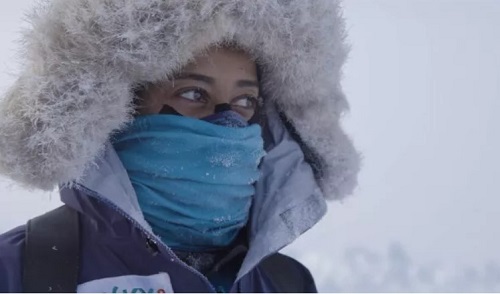 Immediately following the screening, a pre-recorded conversation with filmmaker Holly Morris and others from the film.  Moderated by DC EFF’s Director of Programming Brad Foder.

UNDERSTORY: A JOURNEY THROUGH THE TONGASS (40m)

Three intrepid women set sail on a 350-mile expedition through the Tongass National Forest in southeast Alaska, the largest temperate rainforest remaining intact on the planet. This journey tells the story of this unique and non-renewable place, as well as the impact that clear-cut logging could have on diverse wildlife, and the cultures and livelihoods of local communities and our planet’s climate.  Directed by Colin Arisman and produced/ narrated by Elsa Sebastian. 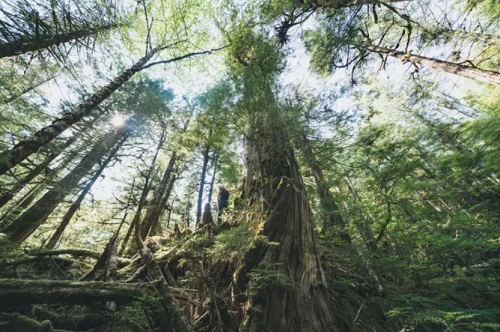 This documentary, ten years in the making, weaves together the most urgent themes of our times through the story of one farmer. Anita Chitaya has a gift; she can help bring abundant food from dead soil, make men fight for gender equality, and end child hunger in her village in East Africa. Now, to save her home from extreme weather, she faces her greatest challenge: persuading Americans that climate change is real. Traveling from Malawi to California to the White House, Anita will use all her skills and experience to help Americans recognize, and free themselves from, a mindset that is already helping destroy the Earth.

Original content related to Earth Month programming on related topics ranging from environmental justice to climate activism will be available on the PBS SoCal, KCET and Link TV websites. Contributors will include veteran environmental journalists and other experts. Additionally, website visitors will be treated to multimedia features as well as trailers to the films in the Earth Focus Environmental Film Festival.

PBS SoCal, KCET and LinkTV’s Earth Month content and experiences are part of a commitment to addressing the global issues that impact the planet with a goal of opening people’s minds, lifting spirits and connecting people to each other and the world. For a full line-up of environmental-themed programs, please visit pbssocal.org/earthmonth, kcet.org/earthmonth  and linktv.org/earthmonth.

​EARTH FOCUS​ is an environmental multimedia news magazine featuring investigative reporting, in-depth stories, features and profiles about the people, places and species affected by our changing environment, and the tools we have to understand, mitigate, and adapt to that change. ​EARTH FOCUS is the longest running environmental series on American TV. In production since 2006, the series features in-depth reports on key issues such as endangered species, climate change, environmental health and sustainable practices, with a library of more than 60 episodes, 35 of which are currently broadcast on KCET, PBS SoCal and Link TV. In 2018, KCET relaunched ​EARTH FOCUS with a new format and a fresh approach focusing on urban biodiversity, transnational migration, endangered species, the impact of climate change and other key environmental threats, as well as energy alternatives and cleantech innovation. The new season of EARTH FOCUS is in partnership with the Laboratory for Environmental Narrative Strategies (LENS) at UCLA and the Thomson Reuters Foundation.

PBS SoCal and KCET are both part of the donor-supported community institution, the Public Media Group of Southern California.

PBS SoCal is the flagship PBS station for diverse people across California and delivers content and experiences that inspire, inform and educate. PBS SoCal offers the full slate of beloved PBS programs including MASTERPIECE, NOVA, PBS NewsHour, FRONTLINE, and a broad library of documentary films with works from Ken Burns; as well as educational content including PBS KIDS programs like DANIEL TIGER’S NEIGHBORHOOD and CURIOUS GEORGE.

KCET is on-air, online and in the community, and plays a vital role in the cultural enrichment of Southern California. KCET offers a wide range of award-winning local programming as well as the finest public television programs from around the world. Throughout its history, KCET has won hundreds of major awards for its local and regional news and public affairs programming, its national drama and documentary productions and its website, kcet.org. For additional information about both KCET and PBS SoCal productions, web-exclusive content, programming schedules and community events, please visit kcet.org and pbssocal.org KCET Originals and PBS programming are available to stream on the FREE PBS App on iOS and Android devices, Roku, Amazon Fire TV, Apple TV, Android TV, Samsung Smart TV, and Chromecast. KCET is also available to watch live on YouTube TV.

ounded in 1999, Link TV is an independent viewer-supported media organization dedicated to providing programs that engage and inform its audiences with unique perspectives, and empower them to become involved in the world.  Reaching more than 21 million U.S. satellite households nationally (DIRECTV channel 375 and DISH Network channel 9410), Link TV connects American viewers with people at the heart of breaking events, organizations at the forefront of social change and the vibrant cultures of an increasingly global community. Select programming from Link TV is also available for streaming on Apple TV, YouTube and Roku platforms. For additional information about Link TV productions, web-exclusive content and program schedules, please visit linktv.org.

About the Thomson Reuters Foundation

The Thomson Reuters Foundation is the corporate foundation of Thomson Reuters, the global news and information services company. As an independent charity, registered in the UK and the USA, it works to advance media freedom, foster more inclusive economies, and promote human rights. Through news, media development, free legal assistance and convening initiatives, it uses the combined power of journalism and the law to build global awareness of critical issues faced by humanity, inspire collective leadership and help shape a prosperous world where no one is left behind.